Another inexpensive white from my local Grocery Outlet. This is a blend of Catarratto (75%) and Chardonnay, from Sicily. The label claims the Catarratto element gives the wine a greenish-gold color, but it looked a fairly typical, pale straw color to me. The nose was distantly suggestive of cantaloupe at first, but fairly closed on the whole. On the palate the wine was a bit unusual in having a rather long finish but without having much impact initially or on the mid-palate. My first impression was of a fairly thin, generic white. In other words, it really didn't taste like much until well after I'd swallowed it, when I got a slight buttery taste and hints of citrus. Suspecting I may have started out with the wine too cold to show it at its best, I lingered over a glass (several, actually).

While lingering, I got out my copy of Jancis Robinson's Vines, Grapes, and Wines (Mitchell Beazley, 1986), my favorite book about grape varieties. I always turn here when encountering a grape new to me. The La Piazza label calls Catarratto "an indigenous Sicilian grape," which seems true enough, but Robinson in her section on such grapes mentions two distinct varieties with similar names--Catarratto Bianco Comune and Catarratto Bianco Lucido. That left me wondering which is involved here. Robinson notes only that the first of the two is widely used in making Marsala.

The Oxford Companion to Wine, however, refers to these as forms of the same grape, saying that the latter--Catarratto Bianco Lucido--is the superior form for winemaking, while dismissing the grape in general as mostly producing "excess" wine that is distilled or made into grape concentrate. After these disparaging remarks, the book says (in something of a contradiction) that some "characterful white table wines" are made from Catarratto and points the reader to the entry for "Sicily"--which I turned to. That entry mostly suggests modern winemaking techniques (refrigeration, in particular) have begun to reveal possibilities that may have been dormant in the grape. A good, modern Catarratto is described as having "fruity and floral qualities not unlike the wines of Friuli and Alto Adige" (both in northeastern Italy).

Going back to the wine after it had warmed a little, it had gained considerable body and the citrus element on the finish was more pronounced. There was also a little spiciness on the finish that I hadn't noticed at first and there were hints of nuts as well. While this is not exciting wine, it's not at all bad either. Crisp, light, and easy to drink. It is probably excellent with seafood. I suspect it would be a good oyster wine. At $2.99 a bottle ($2.49 a bottle if you buy by the case), it's hard to complain. I will probably go back and buy a case of this one for use at home. At $32.42 a case (including tax), it's a steal.

I have no financial connection with any producer or retailer of wine.
For more wine reviews, use the Wines I'm Drinking label.
Posted by Colin Talcroft at 8:23 PM 1 comment: 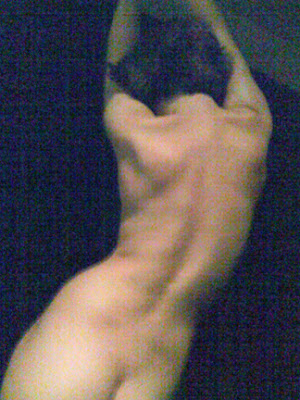 Over the middle part of the summer I had the opportunity to work with a new model for the first time in a long time. I made hundreds of photographs of this unusually beautiful young woman using a traditional camera with black and white film, using a digital SLR, and also using the camera in my original iPhone. I love the way the iPhone camera "fails" in low-light situations, creating pictures with a lot of noise and often with ghost-like duplications where there has been movement. The iPhone photos have a dreamy quality that I like very much--as in the photo above.
Posted by Colin Talcroft at 1:23 PM No comments: 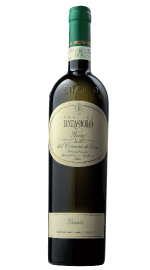 I reviewed two wines from producer Beni di Batasiolo not long ago, the 2005 "Serbato" Langhe Chardonnay and the 2003 "Vigneto Morino" Langhe Chardonnay. Both wines were from my local (Santa Rosa) Grocery Outlet. I visited Grocery Outlet  today for the first time in a couple of months and found a Gavi di Gavi from the same producer that I thought worth a try, because I liked the other Beni di Batasiolo wines and because the Gavi was priced at only $3.99 a bottle. It's from the 2006 vintage, and older whites at Grocery Outlet are always a gamble; I didn't have high expectations, but this was delicious. Gavi di Gavi is made from Cortese grapes in the eastern part of Italy's Piemonte region, famous for Barolo and Barbaresco among reds, Roero Arneis, Langhe Arneis, and others among whites, including modern (light, crisp) white wines made from such international grapes as Chardonnay (the two wines mentioned above being good examples). Gavi di Gavi was a darling of the wine media in the 1980s and much of it was over-hyped and mediocre, but at its best Gavi can be very tasty indeed. Brief tasting notes follow.

A pretty, pale gold in the glass with limes, honey, and floral scents--the latter something like a restrained gardenia. A hint of hazelnuts perhaps, too. Very attractive and appetizing on the nose. I was reminded of some of the white wines of France's Costieres de Nîmes district (near the town of Nîmes, just west of the mouth of the Rhône)--wines that always smell of honey and have a certain waxy texture on the palate. This wine had those qualities and more--a subtly fruity mid-palate, a nuanced finish, and a crisp, balancing tartness throughout. Although low in alcohol by California standards (at 12%) this is the sort of wine that's very easy to drink too much of: Each sip leaves you wanting to go back again to try to pin down the tantalizingly elusive flavors. The current vintage (2009) sells locally for $15.99. Recommended.


I have no financial connection with any producer or retailer of wine.

For more wine reviews, use the Wines I'm Drinking label.
Posted by Colin Talcroft at 10:04 PM No comments: 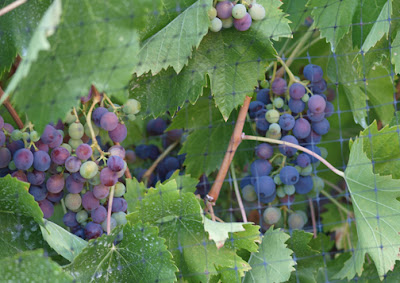 I got the nets on the grapes today. The berries started to take color about a week or so ago (both the Sangiovese and the Cabernet Sauvignon)--maybe a trifle earlier. As the grapes take on color and begin to gain a little sweetness, they become attractive to raccoons and other animals. I've noticed that a sugar level of around 14 brix is enough to please a raccoon, although to make wine that will please a human, the sugar  needs to be at around 24 brix. I think this is the first year I've succeeded in getting up a physical barrier before losing any grapes. The sulfur I used this year seemed to mix better in the sprayer and create a heavier layer on the grapes, so they are virtually mildew-free as well. I'm very much hoping to lose almost none of the grapes on the vines at the moment, but harvest is still about six weeks away.
Posted by Colin Talcroft at 10:47 PM No comments: 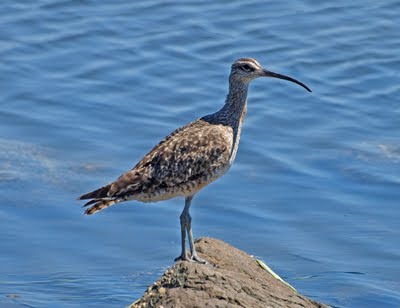 I went out to Bodega Bay this morning for a quick look around, but got going later in the day than I had intended, and there wasn't a lot of bird activity. I did spy the small group of Brants that has been hanging around all summer. It's not clear why they didn't leave with the rest of the Brants in the spring. I got some good photographs of a Whimbrel (upper photo) and some shots of Least Sandpipers (lower photo), but there was nothing out of the ordinary, and so much fog at Bodega Head that almost nothing was visible besides a lone Oystercatcher. Still, it was nice to get out after a busy week of work. 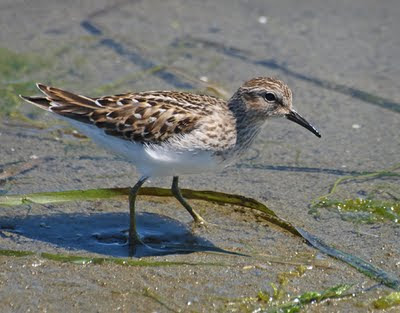 Posted by Colin Talcroft at 5:40 PM No comments: