Mostly finished thinning the shoots on the grapevines today, trying to leave only two at each node, except where I'm trying to move the node back, closer to the main trunk. Will finish tomorrow and then it will be time already for the first spraying of sulfur against mildew.
Posted by Colin Talcroft at 8:09 PM No comments: 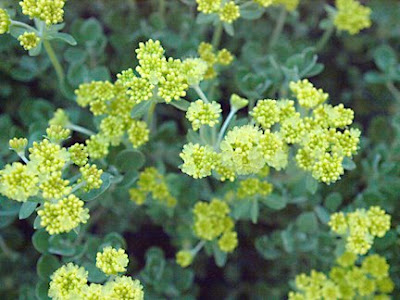 First blossoms opened today on the sulfur buckwheat (Eriogonum umbellatum) plants. These start out a pale sulfur yellow, but fade to a deeper yellow and then to orange and brown, a very attractive cycle of change. Drought tolerant, happy when neglected, beautiful. My kind of plant.
Posted by Colin Talcroft at 8:07 PM No comments: 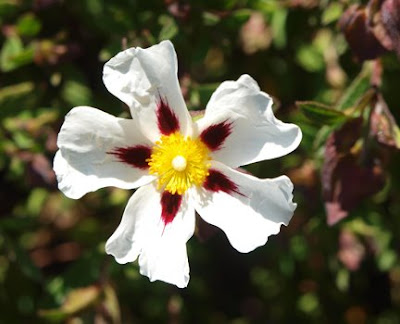 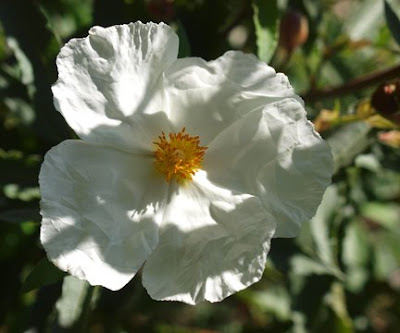 Two more rock roses bloomed for the first time this year, the low one at the front of the house and the big one with white blossoms by the olive tree. Unfortunately, I can't find the species name of either plant. Will update when I figure it out. The pink-white climbing rose on the back fence ("Sally Holmes") also started blooming today, as did the Lewisia.
Posted by Colin Talcroft at 6:46 PM No comments:

On the Road: Food

Had a few good meals on the trip. I especially enjoyed dinner at Jiraffe in Santa Monica. We brought along an old bottle of wine, a 1986 Louis Jadot Corton-Charlemagne that needed to be consumed. It was a pleasure to take it to a restaurant where they understand wine. I didn't have to ask to have it decanted. I didn't have to point out that shaking the bottle would dislodge the sediment and make it undrinkable

In Paso Robles, I had a simple but tasty dinner at Berry Hill Bistro. I tasted a couple of interesting wines there as well--a 2006 Grenache/Syrah/Mourvedre/Viognier blend by Miassian-Young and a 2006 Bien Nacido Vineyard Viognier by Anglim. Paso Robles is reminiscent of Sonoma. It has a central plaza surrounded by restaurants and shops in much the same way. Quite a few of the restaurants looked good. Paso Robles looks worth a future exploration.
Posted by Colin Talcroft at 10:11 PM No comments:

Email ThisBlogThis!Share to TwitterShare to FacebookShare to Pinterest
Labels: Colin Talcroft, Food, On the Road, wine 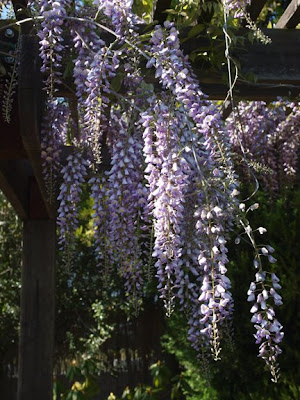 A lot of flowers came into bloom in the couple of days I was away, including: Several roses ("Almost Wild" and the Rosa mutabilis chinensis), Geum, several rock roses (the big white one by the lamp post, the pale pink one with small flowers), Pacific irises (under the "Dapple Dandy" pluot tree), and the big white Rhododendron behind the Wisteria. The Wisteria is now pretty much in full bloom.
Posted by Colin Talcroft at 4:16 PM No comments:

On the Road: Mission Santa Barbara 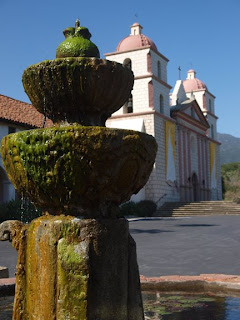 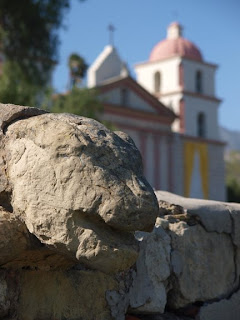 Stopped briefly at Mission Santa Barbara on the way home. The photos show the old fountain in front of the mission and the mountain lion-headed spout on the lavanderia, or laundry, also in front of the mission. The mission proper is in the background of both shots. Around the lavanderia were planted a number of varieties of old grapes of the sorts the mission indians used to make sacramental wines--the start of Santa Barbara's wine industry.
Posted by Colin Talcroft at 4:15 PM No comments: 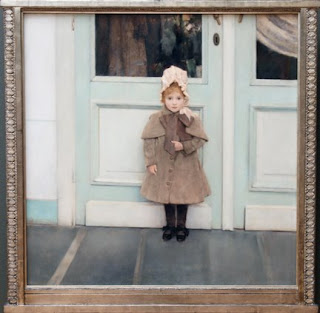 Yesterday, spent most of the day at the Getty Museum. These three paintings are among my favorites in the collection. The first is by Belgian painter Fernand Khnopff (1858-1921). This portrait of the daughter of one of the painter's friends (her name is Jeanne Kéfer) is from 1885. I love the limited range of colors and the odd juxtaposition of the tiny figure and the adult-sized world around her that is evocative of Alice in Wonderland--not to suggest that that was intended. Khnopff was one of the Belgian Symbolists. I realize now (writing this having prompted me to do a little research) that that odd painting of the sphinx called The Caresses is by Khnopff, a connection I hadn't made before. 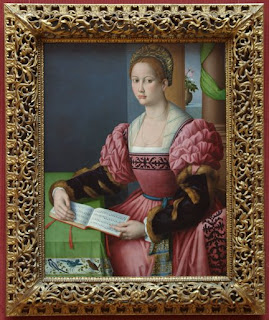 The woman with the musical score is not identified. The painting is attributed to Francesco Ubertini (known as Bacchiacca; 1494-1557). It was painted in the 1540s, but it looks as if the artist might have put down his brushes yesterday. The label suggests this owes a great deal to the influence of Bronzino. I find that interesting because some of my favorite Italian portraits are by Bronzino. 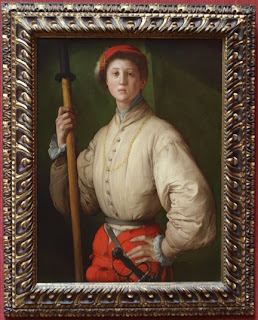 The man in the red hat is a halberdier (one who wields a halberd), probably Francesco Guardi. The portrait dates from 1528-1530. It is by Jacopo Carucci (known as Pontormo; 1494-1557). I love the way the red of the hat and the red at the bottom of the painting frame the man and contrast with the green background. I love the texture of the shirt, the man's confident but languid gaze.

I saw a very interesting show of photographs by Paul Outerbridge Jr., a photographer I had heard of but knew little about. The highlights were color nudes made using the carbro process (three-color separation prints using highly permanent carbon-based pigments). Ironically, photography was not allowed in the photography galleries, so I can't show any examples here. 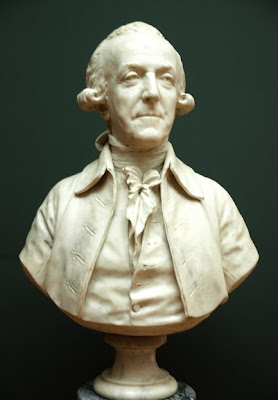 I very much liked this portrait bust by Jean-Antoine Houdon. It's a bust of Marie-Sébastien-Charles-François Fontaine de Biré (quite a mouthful) from 1785. Houdon is probably best known for his busts of political figures, pholosophers, and inventors--perhaps most notably George Washington, Thomas Jefferson, and Napoleon. This sitter, according to the label, was a financial minister of some sort. I know nothing about the man. I just liked the very expressive face.

Posted by Colin Talcroft at 4:14 PM No comments:

On the Road: Pasadena--Found Art 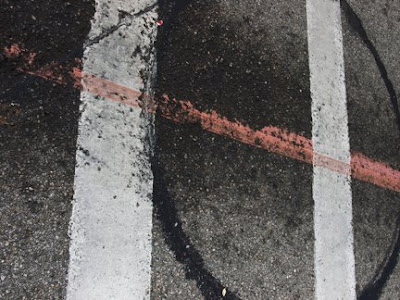 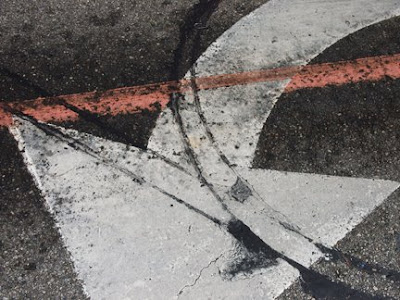 For some reason, I love to look at markings on roadways. They often make interesting abstract compositions. I'm particularly attracted to arrows painted on pavements. These were on the street in Pasadena. Almost got run over photographing them--but anything for art.
And see? I was right about art being everywhere--from Washington, to Cincinnati, to San Francisco--well, to Pasadena, anyway.
Posted by Colin Talcroft at 8:11 AM No comments:

On the Road: Pasadena 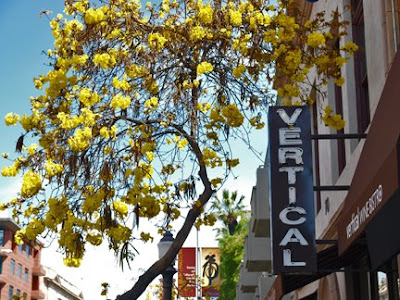 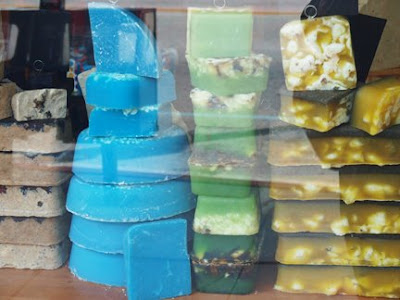 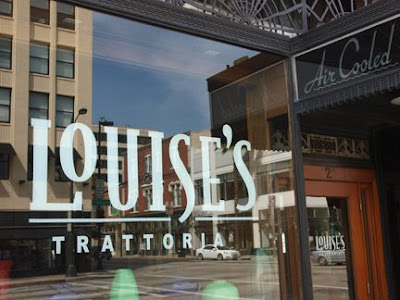 Spent the morning walking around old Pasadena. A lot of art deco buildings to look at. The sidewalk trees are exotic. The place has a good vibe.

The night before, the restaurants were open late and there was a lot to choose from. The middle photo shows handmade soaps in a shop window. The company that makes these soaps is called Lush. I remember them from a shop they have at Whistler Village, in Canada, where I used to go skiing a lot. Lush used to make an amazing massage butter--or sell one, anyway. I like Pasadena.
Posted by Colin Talcroft at 11:38 PM No comments:

On the Road: Huntington Museums 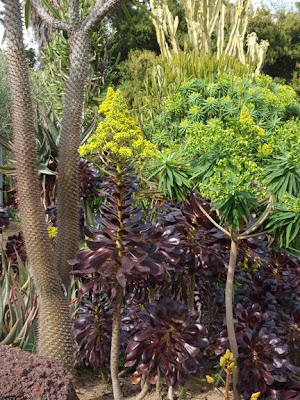 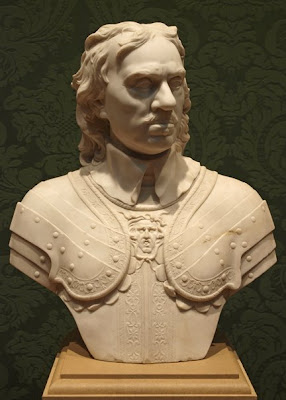 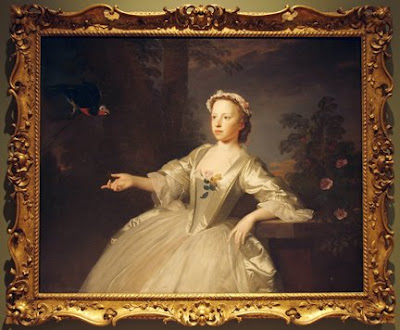 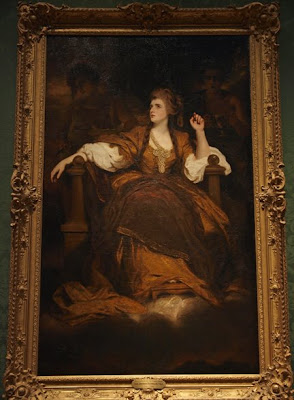 Visited the Huntington Library, museums, and botanical gardens today. What a fabulous place. I could have spent three days there. The art collections are focused on portraits by the likes of Romney, Lawrence, Reynolds, and Gainsbourough, which can be rather too fussy for my taste, but the examples here are pretty much the cream of the crop. I really enjoyed the Joshua Reynolds portrait of Mrs. Siddons, a nice portrait of Mrs. Hamilton (knowing her story from That Hamilton Woman), and a few others, notably this Allan Ramsay painting of a young woman with a parrot. She is not a pretty woman, but she has a fascinating face. I didn't realize that "The Blue Boy" is here. I really liked this bust of Cromwell, too, with the head of Medusa.

They allow photography in the galleries. It's remarkable how well you can record things with a modern digital camera.

The botanical gardens were a bit disappointing just because I was hoping to see some unusual birds, but didn't (saw a black phoebe, a rufus hummingbird, and a mockingbird, but mostly sparrows). Having said that, the cacti and succulent collection is pretty amazing. I'm not being at all fair. This will require another extended visit on another trip. It would be easy to spend a day just in the gardens.
Posted by Colin Talcroft at 11:33 PM No comments:

On the Road: Huntington Beach 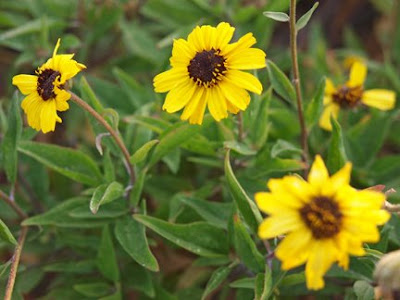 Wasn't able to identify this sunflower-like plant growing in profusion at Huntington Beach.
Posted by Colin Talcroft at 8:47 AM No comments:

On the Road: San Juan Capistrano 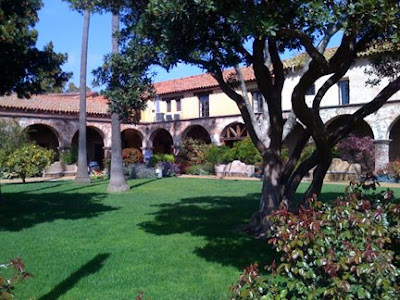 Greetings from San Juan Capistrano. Having a lovely time. Wish you were here. Love, Colin
P.S. Off today to the Huntington museums and botanical gardens.
Posted by Colin Talcroft at 8:00 AM No comments: 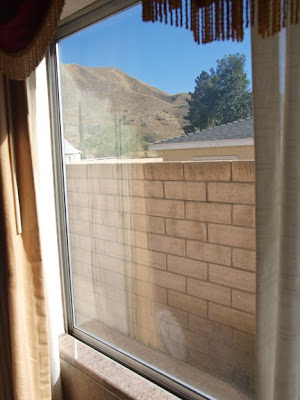 For what it's worth, don't expect reliable wireless or cell phone connections in places with names like Lost Hills and Mint Canyon.

This is a photo of the view from the room I slept in in Lost Hills. Ahh, the pleasures of cheap roadside lodgings....
Posted by Colin Talcroft at 8:49 AM No comments:

On the Road: San Francisco to San Juan Capistrano (Spring 2009) 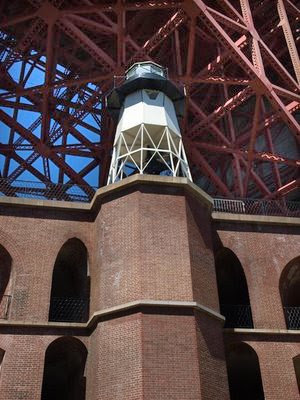 Making a short trip south. Day one started with a delicious eggs Benedict at Park Chow, near 9th and Lincoln, in San Francisco. Park Chow is notable (in my mind, anyway) for its garlic hash browns and the Hollandaise sauce on the eggs Benedict. The place has an outdoor dining area upstairs that's invisible from the outside. It's a pleasant place to hang out on a Saturday morning.


Later I visited Fort Point for the first time since my childhood. It's an interesting pre-Civil War fortress right under the Golden Gate Bridge. The place is probably best known today as the spot where "Carlotta" jumps into the Bay in Alfred Hitchcock's Vertigo. I saw about 100 Western Grebes in the bay off Fort Point--elegant long-necked birds. I'm heading to San Juan Capistrano today.
Posted by Colin Talcroft at 8:03 AM No comments: