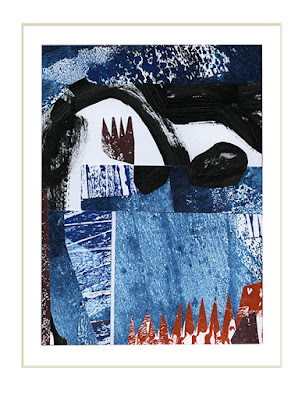 Click on the image for a larger view. For more, use the Art I'm Making tab to the right, or visit my collage website at: http://ctalcroft.wix.com/collage-site/.
Posted by Colin Talcroft at 6:32 PM No comments:

Art I'm Looking At: Raphael's Portrait of a Lady with a Unicorn at the Legion of Honor 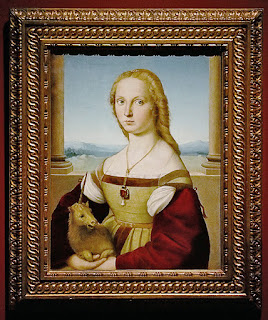 The Galleria Borghese in Rome, in what was once the Villa Borghese Pinciana, houses a large part of the collection of paintings, sculpture, and ancient artifacts amassed by Cardinal Scipione Borghese, a nephew to Pope Paul V (in power from 1605 to 1621). The Villa was built by Flaminio Ponzio, who worked mainly for the Pope, the building and its gardens based on ideas proposed by Cardinal Borghese. On the outskirts of Rome at the time, it was used by the Cardinal for entertaining. Among the many works housed at the Galleria Borghese today is an enigmatic 1506 portrait by Raphael known as Portrait of a Lady with a Unicorn, presently on display at The Legion of Honor, in San Francisco.

Finding it requires a short hike past many works of interest in the permanent collection (as well as a couple of ghastly paintings by El Greco) at the far end of a row of linked galleries. The Raphael has been given a small room of its own painted an ox-blood red that complements the sleeve color of the sitter in Raphael's portrait. Her name is unknown, but we are told the painting was probably commissioned to commemorate a wedding. That view is based on internal clues—mainly that x-ray examination has shown the unicorn was originally painted as a small dog, traditionally a symbol of marital fidelity, but the wall text points out that she wears a gold-clasped belt, symbolizing fertility and associated with marriage; that the necklace she wears was likely a betrothal gift or part of her dowry; and that the jewels it contains—pearls, rubies, and sapphires—were associated with such traits as virginity and purity (the pearls), prosperity and fertility (rubies), and fidelity (sapphires). There is also a suggestion that the unicorn may refer to her family's heraldry, although, if that is true, I wonder why the animal was not painted as a unicorn from the outset. An inspired afterthought, perhaps? 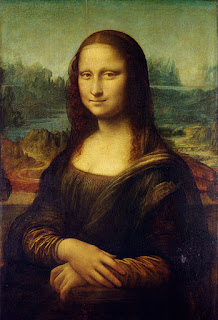 There are obvious echoes of Mona Lisa, as the wall text also points out. Most important of these is perhaps the sitter's slightly sideways, three-quarter-length pose with hands folded in her lap, but also the use of a parapet with columns (the columns barely visible in Mona Lisa) to separate the subject from a distant landscape behind her. Although there are precedents for both, the inclusion of an imagined landscape in the background is often considered an unusual feature of Mona Lisa, painted over a number of years from around 1503. Raphael has used this device, but he leaves the horizon low, at the shoulders of the sitter, while Leonardo uses horizontal landscape elements to draw attention to La Giaconda's eyes (a trick that, simplified, Van Gogh would later use to great effect in his self-portrait with a pipe and bandaged ear).

The hands have quite different effects in the two paintings. The hands of Leonardo's sitter are open and relaxed, Raphael's sitter captures her little unicorn's hooves and holds them tight. Her arms cradle the animal. The dark sleeves of her dress act like a pair of parentheses. The visual complexity of Mona Lisa is behind the main subject and mostly in the upper half of the painting. In the Raphael, the visual complexity is below and in front of the main subject. The face of the unicorn attracts almost as much attention as the face of the woman. If the beast were not so clearly in her possession, subordinated to her and under her control, this would be a dual portrait. Nevertheless, part of the painting's effectiveness is the back-and-forth between the two faces the unicorn's presence forces on the viewer. La Giaconda is much easier to look steadily in the eye than is Raphael's lady.

The small size of the cradled unicorn is rather startling at first, but, according to the wall text, the unicorn was often depicted in early bestiaries as a small animal—kid-like—rather than as the full-sized horse-with-horn we think of today. The unicorn was said to be wild and untamable but with a key weakness—a fondness for young virgins. A unicorn could be captured or killed if lured to sleep in the lap of a maiden, we are told, and a unicorn in the lap of a virgin was a common motif associated with the Virgin Mary and the Christ Child. So, the Raphael painting can be read as a Madonna and Child not only as a wedding portrait.

The unicorn story puts me in mind of other men and beasts with a fatal weakness—near-immortal Achilles and his heel, of course—but also the kappa, a vaguely humanoid creature of Japanese folklore with a beak and characteristics of a reptile or amphibian, including a turtle-like shell. Mischief makers that dwell near streams and ponds, kappa are said to play pranks on passersby, sometimes with fatal consequences. The seat of the animal's power is a water-filled depression on the top of its head—but, if the water drains away, the kappa loses its power. Kappa, the stories go, are very polite, however. So they can be rendered temporarily powerless by a formal bow in greeting—as the animal will always return the bow, letting the water spill from its head. Similarly, Raphael's unicorn is at least temporarily tamed, captured and held in the lap of the maiden, a victim of its special weakness. 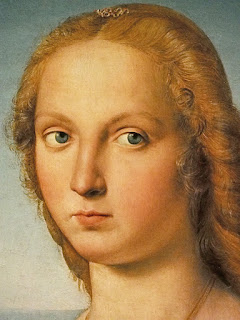 A chronology on one wall reveals other facts. The painting was first recorded in the collection of the Galleria Borghese in 1638. Surprisingly, Raphael's lady was once partially painted over, the image having been converted to a portrayal of St. Catharine of Alexandria some time after 1682 with the addition of a cloak around her shoulders, a palm branch (a symbol of martyrdom), and a wheel (Catharine is said to have been tortured to death—broken on the wheel). Until 1927, when the underlying work was firmly attributed to Raphael by Italian art historian Roberto Longhi (working from an earlier suggestion floated by historian Giulio Cantalamessa that two artists had worked on the painting—one markedly more skilled than the other), authorship was unclear. The painting was attributed variously to Perugino, Ghirlandaio, Granacci, and others. Suspicions about the later additions were confirmed in 1933, when the painting was first x-rayed and tests subsequently showed the existence of landscape elements under the cloak. Restoration work commenced in early 1936 when the image was transferred to canvas from the original panel and removal of the overpainting began. Within about 30 years, better x-ray technology revealed the presence of the dog under the unicorn.

While I would like to have seen better images of the painting as St. Catherine, before restoration, (do they exist?)* and I would have enjoyed more details of the restoration process (described as having been done with a scalpel), the gallery offers a concise and informative presentation of an important painting. Yes, it's worth making a trip to see this single image.

Portrait of a Lady with a Unicorn will be showing at the Legion of Honor through April 10, 2016. San Francisco is its second of only two stops in the United States following a stay from October 3, 2015 to January 3, 2016 in Cincinnati at the Cincinnati Art Museum. The painting is visiting the United States for the first time. Viewers in Cincinnati got to see the painting for free. At the Legion of Honor, admission ranges from $6 for students to $10 for adults ($7 for seniors). Closed Mondays. The exhibition is organized by the Fine Arts Museums of San Francisco and the Cincinnati Art Museum in collaboration with the Foundation for Italian Art and Culture and the Galleria Borghese. The Legion of Honor presentation is made possible by lead sponsorship from the Frances K. and Charles D. Field Foundation, in memory of Mr. and Mrs. Charles D. Field, with additional major funding from The Christian Humann Foundation.

* I have attempted to find such an image on line, with no success. However, Raphael actually did paint St. Catherine of Alexandria (below), around 1507, thus not long after he painted Lady with Unicorn. He shows her with her symbol, the wheel. The painting is in the National Gallery, London. The photographs of Mona Lisa and Raphael's St. Catharine are from Wikipedia.

[Update: This Hyperallergic article reproduces a black and white image of the painting from 1900, before its restoration.] 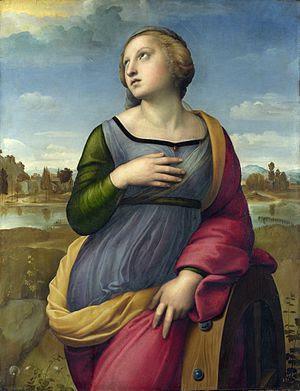 Posted by Colin Talcroft at 5:48 PM No comments:

We keep getting new rain--which is great--but the historical average keeps rising, because it's normal to get rain at this time of year. The average for this date in Santa Rosa is a little over 17 inches. Last night we got 0.90 inches of new rain, bringing our total for the 2015-2016 rain year to 11.00 inches--six full inches below normal. We should catch up, if the rains continue this year. Time will tell.

[Update: More rain. It rained most of the day on the 17th and overnight into the early morning of the 18th, adding 2.05 inches of new rain. That brings our total to 13.65 inches so far. The historical average for January 18 is 18.35 inches. More rain is predicted for this week.]
Posted by Colin Talcroft at 7:00 PM No comments: 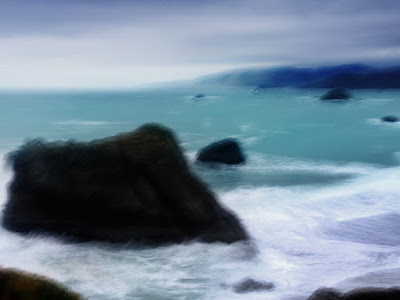 Out at Duncan's Landing, Bodega Bay, yesterday (January 9, 2016) I made a few landscape photos. I especially liked this one. I think I may attempt a series of these.
Posted by Colin Talcroft at 3:17 PM No comments: