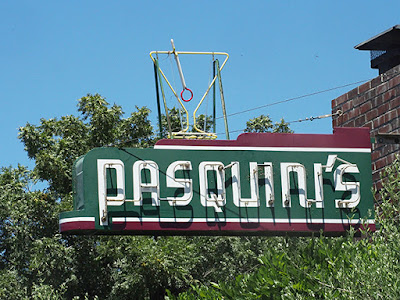 On a recent short jaunt up towards Sacramento and Redding I passed through Yuba City. On the outskirts of the town I saw this neon cocktail glass sign at Pasquini's. This one is fairly simple, but the glass is a shape I've never seen before, suggesting it was custom made. Although I seemed to be in Yuba City, the Pasquini's website gives the address as 6241 Highway 99, Live Oak, CA 95953.

For more, click the "Cocktail Glass Collection" label at right at the top of the page.
SaveSave
Posted by Colin Talcroft at 3:11 PM No comments:

Books I'm Reading: The Girl With The Gallery 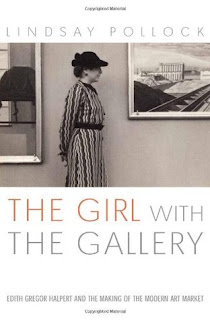 I had never heard of Edith Gregor Halpert before reading Lindsay Pollock's biography, The Girl with the Gallery (Public Affairs, 2006). Halpert appears to have played an important role in creating the market for modern American art at a time when collector and museum money in the US was focused squarely on European art. She was instrumental in supporting the early careers of several important artists, including Stuart Davis, Ben Shahn, Arthur Dove, and Charles Sheeler. She played a key role in bringing American folk art to the attention of collectors and museums. She was the only dealer the notoriously difficult Alfred Stieglitz trusted to act as his agent in selling the work of such artists as John Marin and Georgia O'Keefe. She was the trusted advisor of wealthy patrons such as Abby Aldrich Rockefeller, whose private collections later augmented important museum collections. She championed black artists long before it was fashionable. She also chose to open her gallery in Greenwich Village at a time when virtually no galleries existed there (1926).  Halpert should be better known (and perhaps she is better known because of this book, now ten years old).

There is much here about the day-to-day business of selling art. Halpert appears to have been an obsessive record-keeper. Mining the material Halpert left behind, Pollock has drawn a very detailed picture of Halpert's dealings with the artists she supported, with the collectors she cultivated, and with rival dealers. The picture of Halpert that emerges is of a determined and effective saleswoman and a crack organizer. Although there is probably more detail here than the average reader will care to read through, anyone with a particular interest in 20th century American art is likely to find The Girl with the Gallery well worth the time.
Posted by Colin Talcroft at 10:07 AM No comments: