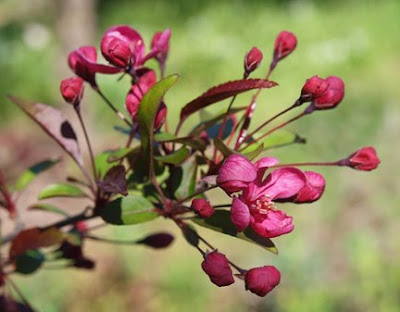 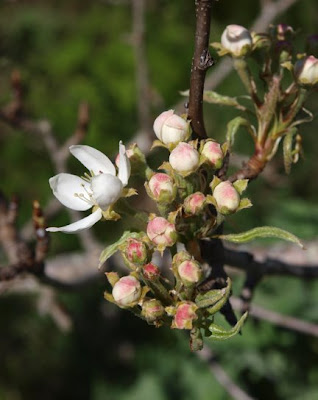 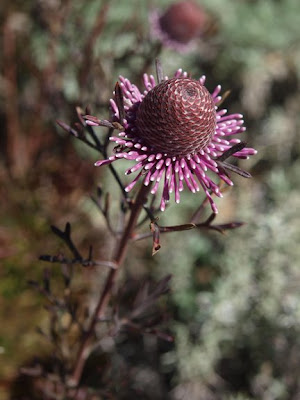 Spring is really here. Every day brings a number of new plants coming into bloom. Today the first blossoms opened on the deep pink crabapple (unfortunately, I can't remember the name of the variety), on the Bosc pear, and on the Isopogon formosus we have. The flowers on this last, an unusual Australian plant, open progressively, so it's hard to say exactly when a flower is in full bloom, but I note the plant today because the flowers are starting to look more flower-like than not. Even the tightly closed buds are attractive on this plant.
Posted by Colin Talcroft at 11:45 AM No comments:

Today, for the first time since coming back to the United States, I took a pair of binoculars and a bird book out to Lake Ralphine and Spring Lake, the former is the small lakes in Howarth Park here in Santa Rosa. I saw quite a lot in a leisurely hour-long walk around the lake. The common mergansers I noticed there a couple of weeks ago were still around. I saw eight females and three males. There was a lone male bufflehead diving for remarkably long spells. I saw the usual cormorants, mallards, canada geese, and other geese--the half-tame year-round residents, but I also saw a common moorhen, which is a first sighting for me. There was a pair of coots on the water as well. In the trees I saw a couple of yellow-rumped warblers and a large bird that looked like a night heron, but it was colored oddly--mostly white with yellow legs and a bluish-grey head and back. I'm not sure exactly what it was. There was another heron-like bird on the far side of Spring Lake that I couldn't identify either, but this one was mostly brown.

More intriguing was an odd duck on Lake Ralphine, that had characteristics of a mallard (the distinctive curls in the tail feathers) but was otherwise quite different. It had a strikingly iridescent teal green head with small flecks of white. Its bill was a yellow-greenish gray, not yellow. Its back was the same greenish color as its head, but darker. It had a white throat and breast, but was otherwise a medium to dark brownish grey. It had no neck ring and no brown on the breast. There is nothing in the bird book that makes sense. Someone I talked with suggested it might be a mutt, and that seems to make sense. Apparently the mallards interbreed with domestic ducks that hang out on the lake.

In other bird news, three cormorants flew over the house this morning, which is quite unusual. Yesterday, driving on Llano Road past the water treatment plant, I saw two American white pelicans, which is a fairly rare sighting--only the second time I've seen these birds here in Sonoma county. The pelicans I've seen at the coast are mostly brown pelicans. 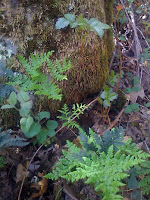 Along the trail I found a beautiful little stand of gold-backed ferns (coming up through a thicket of poison oak) and a group of western shooting stars in bloom (top photo).
Posted by Colin Talcroft at 2:50 PM No comments: 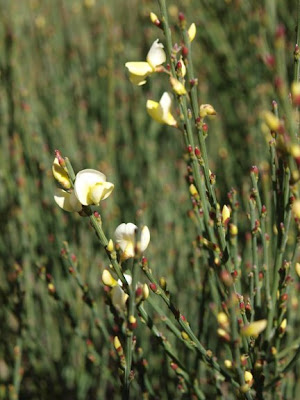 First blooms today on the yellow Cytisus scoparius. Soon the plant will be covered with yellow flowers, making the foliage almost invisible. The brick-orange variety we have, called "Lena," is in full bloom after this one has finished completely.

Posted by Colin Talcroft at 8:34 PM No comments: 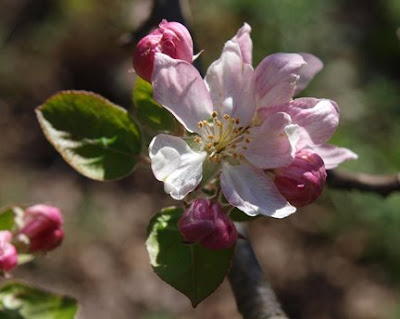 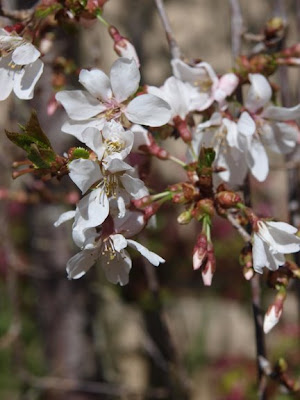 The first flowers opened today on the apple tree, a "Pink Lady," (top photo) and the weeping cherry ("Snow Fountain"). In both cases only one or two isolated buds have opened. The trees are far from being in bloom. On the apple tree, the highest branches haven't even seen bud break yet. Nevertheless, I record the first open blossoms here for the purposes of my botanical calendar. The pink crabapple has many buds, but none open yet.
Posted by Colin Talcroft at 9:13 PM No comments: