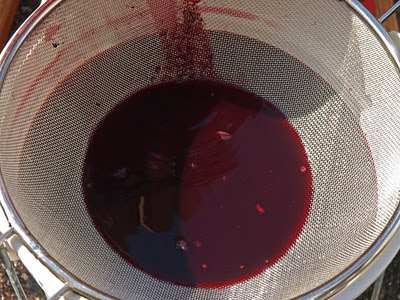 Yesterday (November 7) I put capsules and labels on the 2010 Cabernet Sauvignon/Cabernet Franc wine I bottled yesterday. The day before, I pressed the 2011 Cabernet Sauvignon/Cabernet Franc and transferred it to glass carboys. Yesterday, Monday, I inoculated the new wine with malolactic bacteria to start the malolactic fermentation. Malolactic fermentation converts malic to lactic acid, a routine procedure in making red wines. Malolactic fermentation is a bacterial fermentation that requires a little more warmth than the yeast-based primary fermentation. So, the carboys are wrapped in blankets in the living room with a small electric blanket between them to keep the temperature up. Malolactic fermentation is somewhat mysterious. It can take anywhere from three weeks to two months and it doesn't always show outward signs. The only way to really know what's going on is to do a paper chromatography test that shows the levels of tartaric, malic, and lactic acid in the wine. Sometimes tiny bubbles form at the top of the wine, indicating that some sort of activity is going on, but not always. I tend to take it on faith that the process is under way, but I'll be looking for signs the next couple of days. 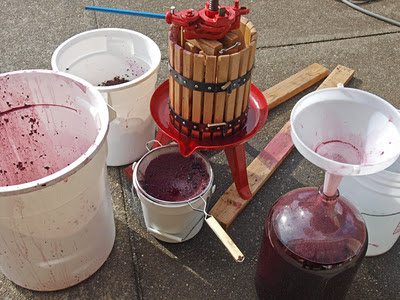 The Sangiovese rosé fermentation is just about finished. I'll need to rack that wine off the gross lees soon--probably tomorrow. The wine is beginning to clear. Less carbon dioxide production means the suspended material is beginning to fall out of the wine. I think we'll end up with a very pretty pink. The harvest was so late this year, though, that I don't think the wine will be ready by Thanksgiving, as it usually is. We'll have some for Christmas though.

The 2010 Cabernet is finished now. I put the back labels on today. I'm pleased with the labels I designed for both the front and rear of the bottle. I decided red capsules would look best with the deep red of the front label. The capsules are on. The wine is ready to drink. The samples I tried while bottling and with dinner after bottling was done suggest the wine is good despite the cool summer last year. It seems a little soft compared with other years, which suggests it may not age as well as other vintages, but only time will tell.
Posted by Colin Talcroft at 9:02 PM No comments: 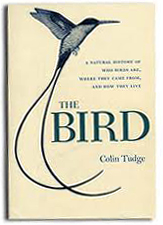 I've just finished Colin Tudge's  The Bird (Crown, 2008). The full title gives a little of the book's flavor--The Bird: A Natural History of Who Birds Are, Where They Came from, and How They Live. I imagine Mr. Tudge is an interesting man to talk with--about virtually any subject. Evidence of deep curiosity and subtle thinking is on every page of the book. I have no doubt that millions of people ask themselves from time to time things like "How do birds fly?" or "Are birds really dinosaurs?" or "Why don't woodpeckers get headaches?" Mr. Tudge has considered questions such as these, and many, many more, and he offers answers.

Having not long ago read this author's book The Tree (Crown, 2006), I had an idea of what to expect. The books are organized in the same way. Following a discussion of how birds are believed to have evolved (and, yes, birds do appear to be the descendants of a particular group of dinosaurs), Tudge lays out the entire world of birds as they survive today. Much of the book is a catalog of all the birds in the world, family by family, with discussions of where the birds in each family live, how they relate to each other within groups, and how the various families interrelate. While some families are very small--the peculiar remnants of once much larger groups, many are very broad and astonishingly diverse, with members finding their way into nearly all ecological niches available. It's impressive to see how frequently animals (in this case birds) have evolved independently along similar lines.

Tudge points out many examples of convergent evolution--for example, the case of swifts and swallows, which are not at all closely related. Swallows are passerines, or perching birds, with feet adapted to automatically cling to what they alight on--a twig or a wire fence--with a long back toe and a locking mechanism that allows them to hold on without using their muscles (one reason passerines don't fall out of trees at night when they roost). The swifts (family Apodidae) can barely perch at all (the root of the family name means "footless"). They roost by clinging to rocks, trees or buildings, and one or two species of swift spend almost their entire lives in the air. Yet, swifts and swallows have the same sickle-shaped wings, similar forked tails for maneuverability, and their feeding strategies are virtually identical--they hunt for insects at high speed on the wing.

The latter part of the book is more expansive, covering topics such as: how birds eat (and there are many strategies and adaptations for each strategy); the endlessly fascinating phenomenon of migration, with much attention to what makes arduous and dangerous journeys worth the effort; the sex lives of birds; the social relationships of birds; and the intelligence and modes of thinking of birds. On this last subject, the feats of memory of the Clark's Nutcracker and the Western Scrub-jay (both birds that cache food in the autumn for winter use) are particularly impressive--Clark's Nutcracker can hide and remember the hiding places of thousands of seeds each season. The final, somewhat melancholy chapter touches on the relationship between birds and humans and what the future is likely to hold for the birds of the world. There is much to lament. Many species are in rapid decline. He emphasizes that much more and better science is needed and that awareness built on good science will be essential to helping birds survive. Tudge ends on an only slightly hopeful note in an epilogue called "A Matter of Attitude," pointing out that attitudes about birds (and about animals and conservation in general), have long been dismally unappreciative. However, he believes that approaches are beginning to change, at least in some quarters, with scientists and others seeing birds as more intelligent, more socially complex, more thoughtful creatures than in the past. Let us hope Mr. Tudge is right, for birds are fabulously diverse and beautiful. We have lost too many already.
Posted by Colin Talcroft at 10:32 AM No comments: 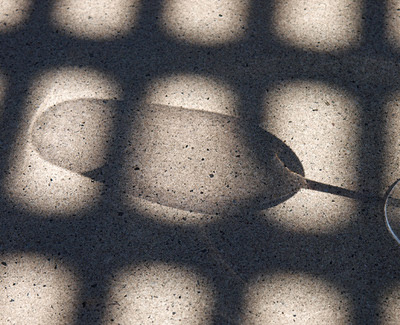 A few weeks ago I went wine tasting in Napa with a guest from Japan. At Opus One there is a covered balcony that overlooks the vineyards. The shadows of the lattice overhead and my empty glass looked like art to me. Found Art.

For more found art, see my blog Serendipitous Art.
Posted by Colin Talcroft at 7:26 AM No comments:

We had 0.6 inches of rain overnight. It was supposed to rain today (November 6) as well, but it's bright, clear, and sunny. Today I will be pressing wine and also bottling last year's wine. I was afraid I was going to have to do it in the rain. The new precipitation brings our total for the 2011-2012 season to 2.9 inches. That's slightly below the average for November 6 (3.23 inches). Average annual rainfall in Santa Rosa is 31.91 inches.
Posted by Colin Talcroft at 11:02 AM No comments: