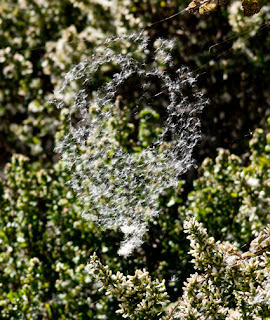 Today I spent much of the afternoon looking at birds in the Bodega Bay area. While walking through some brush near the place bird watchers call "Owl Canyon"--mostly coyote bush, yarrow, lupines, and blackberries--I noticed this spider web. The coyote bush is releasing seeds everywhere right now. The web was downwind. Found art. (Click on the photo for a larger view.)
Posted by Colin Talcroft at 6:57 PM No comments: 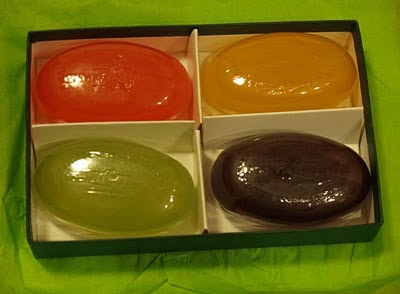 We've had the first appreciable rain of the 2010-2011 rainy season in Santa Rosa today (the official rainy season goes from July 1 to the following June 30 each year). So far, it's been a mere 0.15 inches--not enough to make much difference to the plants in the garden, but perhaps enough to encourage fungus and other problems with the wine grapes.

Testing random berries in the past few days, the ripest are at only 19 Brix, the least ripe still as low as 14 Brix. If rain forces us to pick early, we'll have to add sugar to the crushed grapes, and the result is likely to be thin, rather characterless wine--but it's been a very difficult year weather-wise, and handmade, estate grown wines are, if nothing else, an expression of the weather in the year they were made. If the rain stops quickly, the sun comes out, and we get some decent temperatures in the coming weeks, things may turn out more happily. If rain doesn't force the difficult decision to pick before the grapes are truly ripe, the sugar levels are still suggesting an early November harvest. At this time in 2009, we were ten days from harvest.

[Update: It cleared by late afternoon. The Cabernet grapes, shielded by a thick canopy of leaves look fairly dry. The Sangiovese grapes, more exposed, are somewhat damp, but I suspect they'll dry out with little damage having been done. And so the waiting begins again....]
Posted by Colin Talcroft at 11:07 AM No comments: