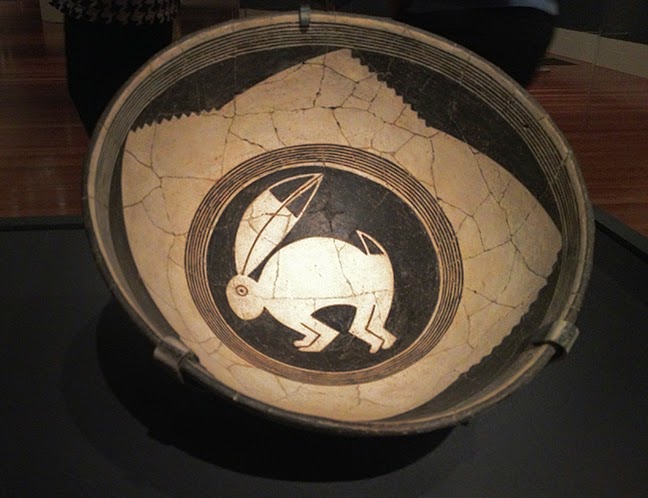 I visited the De Young Museum in San Francisco again recently and took in most of the current exhibits. There was a lot to see. For starters, the museum is now showing pieces from a very fine collection of Native American art donated by the Thomas W. Weisel family--Lines on the Horizon: Native American Art from the Weisel Family Collection (to give the show its full name), on view through January 4, 2015. 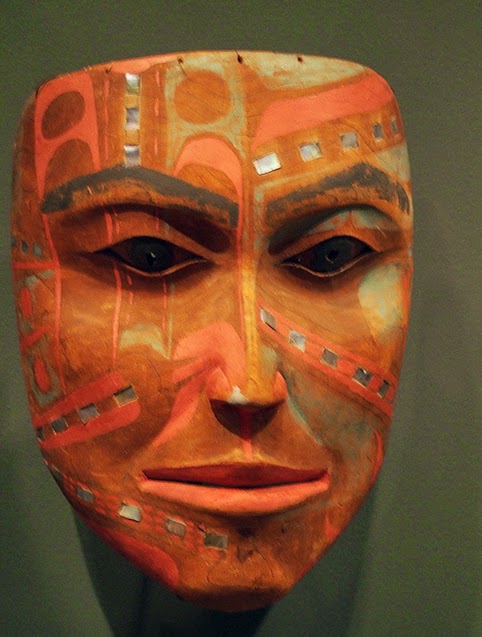 Most of the pieces are the work of southwestern tribes. Notable are a group of very early Mimbres earthenware vessels decorated with pigment (above) and a large number of Navajo weavings, including several very fine early "chief's blankets," but there are a few choice Northwest Coast pieces too, including a striking Tsimshian mask with shell inlay (left; circa 1800-1850), and a small group of plains "ledger drawings." These last are simple, rather poignant drawings made on ruled ledger paper of the kind distributed to reservation schools by the US government--evidence of traditional activities (drawing) surviving during the period of forced assimilation. This exhibit alone is well worth a visit to the museum. 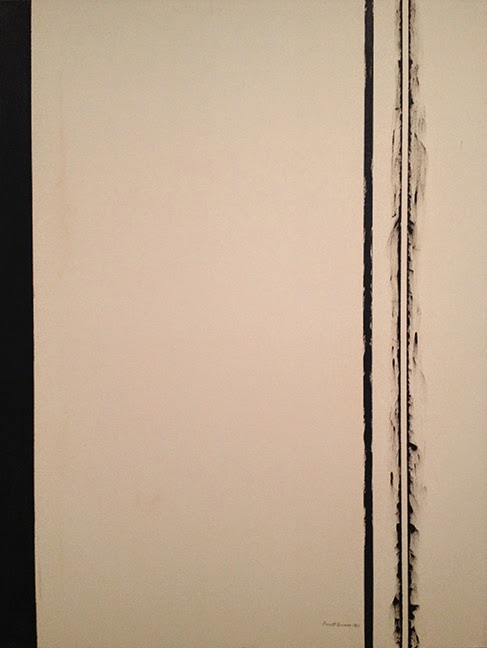 Modernism from the National Gallery of Art: The Robert & Jayne Meyerhoff Collection (through October 12, 2014), seemed poorly organized. It would have been easy enough to present these works simply as highlights of the Meyerhoff collation, but the introductory text in the galleries sets up expectations that go unfulfilled. The text suggests the show will pose and attempt to answer questions about the motivating forces behind postwar American art without really doing that. The arrangement of the works in the galleries seems fairly arbitrary. A chronological approach might have been more effective if the intent was to show the range of styles American artists have explored in the last seven decades (the works range from the late 1940s through the present, more or less, with many familiar names represented). That said, I thought the exhibition was worth seeing. The highlight was Barnet Newman's 16-panel series The Stations of the Cross: Lema Sabachthani presented in a chapel-like setting, as originally intended. Pictured here is Third Station (1960). Each of the paintings repeats a basic composition with variations. Newman called the series (painted over about 8 years--between 1958 and 1966) a "complete statement of a single subject," according to the gallery text, and that abstract meaning would seem to fit the works better than the religious idea that was their original armature. 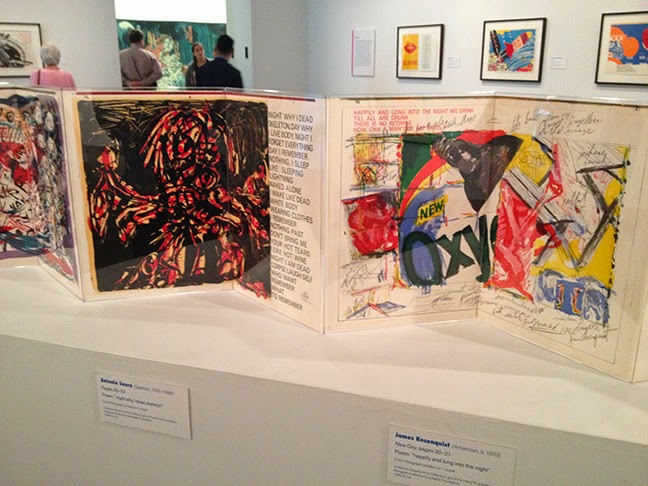 Perhaps most interesting, however, was a show of Walasse Ting's 1¢ Life, a large book of Ting's poetry. I had never heard of Ting or his book, but I very much enjoyed seeing this collaborative creation, which, published in 1964, is 50 years old this year. A remarkable group of 28 artists worked with Ting to illustrate with lithographs a collection of 61 of his ungrammatical, chaotic, evocative, sometimes comical poems--artists including familiar names like Asger Jorn, Karel Appel, Roy Lichtenstein, Andy Warhol, Joan Mitchell, James Rosenquist, Sam Francis, Tom Wesselman, Pierre Alechinsky, Jim Dine, Mel Ramos, and Robert Indiana, as well as some names less familiar to me. A lot of fun on many levels, the book is notable for Ting's exuberant poetry (some of it difficult to read on pages displayed upright well below eye level), for the lithographs, and for its very conception--as an interesting example of bookmaking (although the volume on display is unbound; 1¢ Life appears to have been conceived as a portfolio). It functions as a snapshot of lithography of the period, especially interesting for the inclusion of several artists not much accustomed to the medium. It's unclear to me whether Ting's odd use of language was a direct result of linguistic weaknesses or if he knew better and deliberately chose a pidgin-like idiom that evokes Hollywood caricatures of Chinese, non-native speakers of English. To give just one example, a verse from his poem "Go Back Infant" (illustrated by Karel Appel) reads (all in caps):

Strange, but often compelling language typifies the writing. The exhibition of Walasse Ting's 1¢ Life is showing through September 7, 2014.
Posted by Colin Talcroft at 4:42 PM No comments: 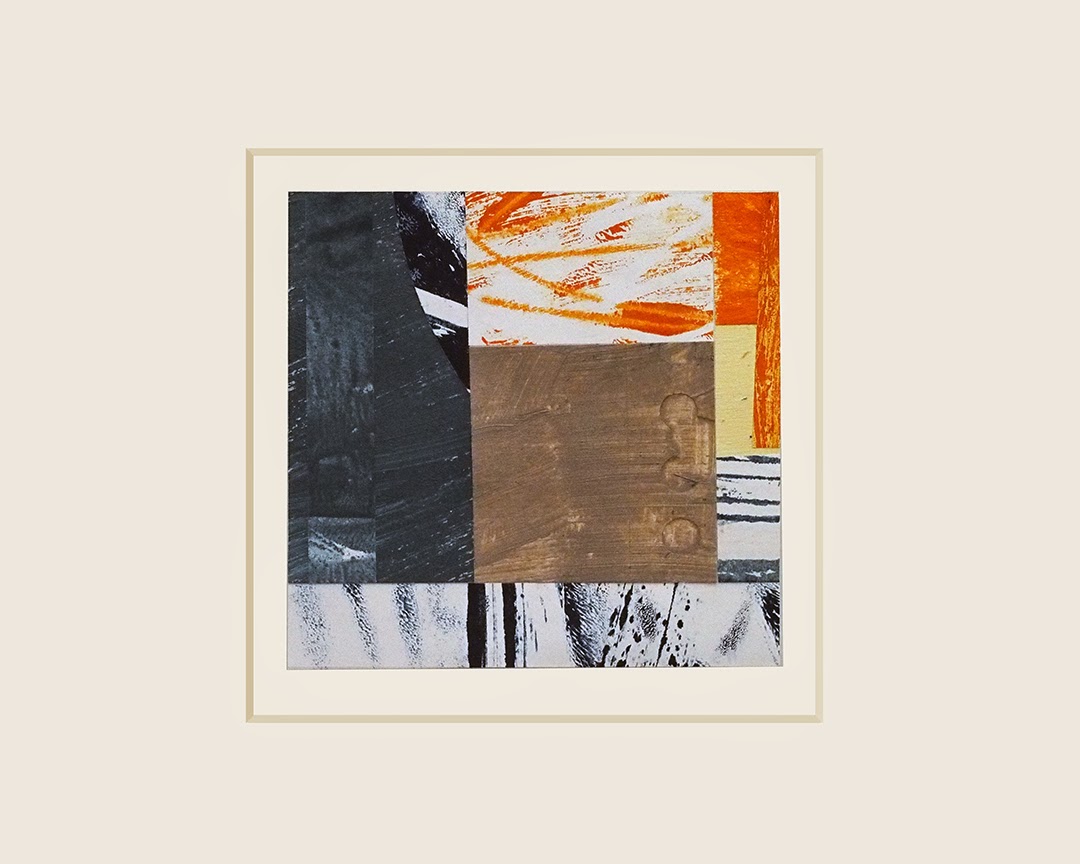 I continue to make collages. Here are two more, these still made using scraps from sheets of paper painted or printed on weeks before. Sometimes the oddest small bit of paper left over from other work is precisely the shape, color, or visual weight needed in a new piece--which makes it hard to throw scraps away; nothing seems like trash. 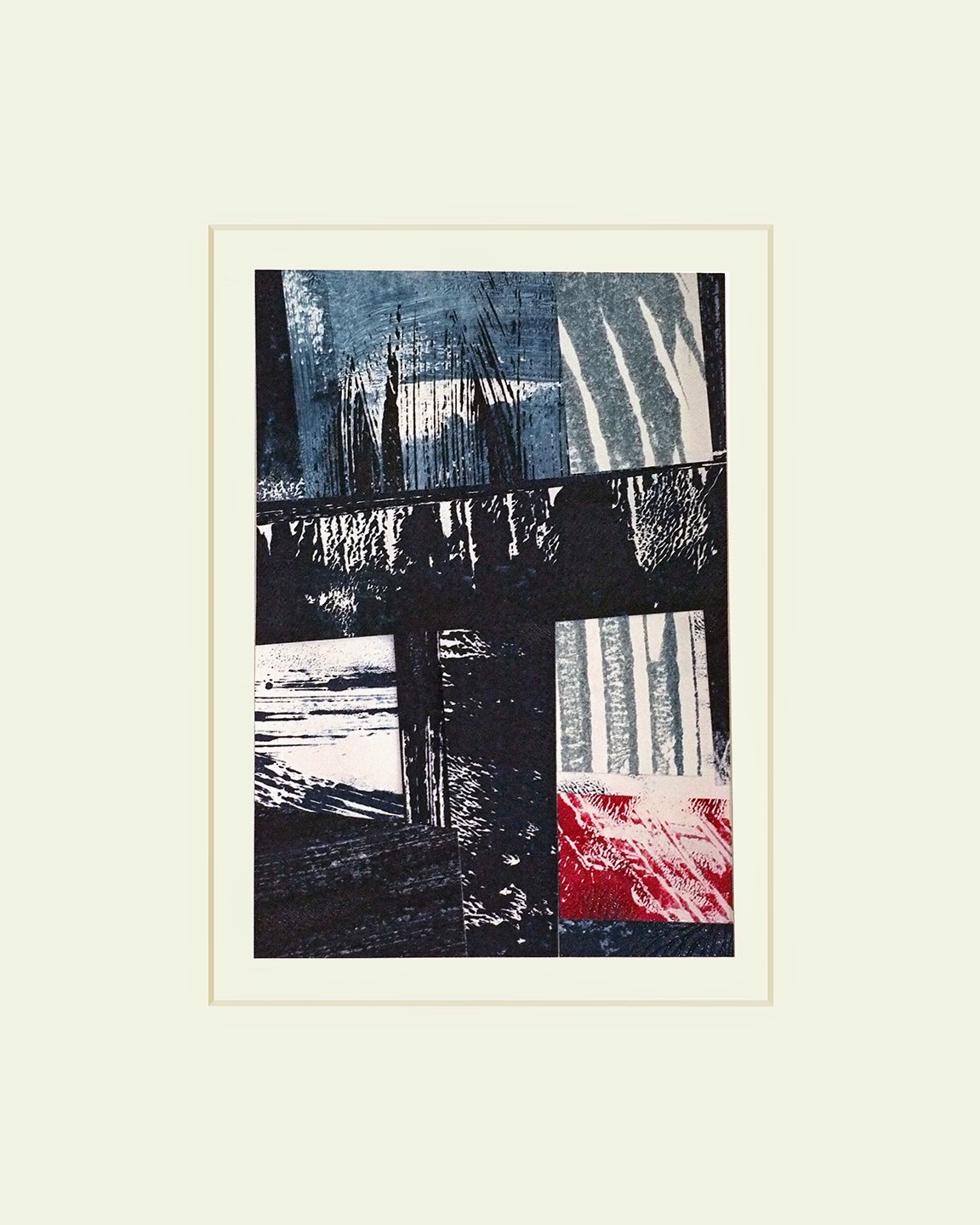 Posted by Colin Talcroft at 2:43 PM No comments: