Went to an early showing of Vicky Cristina Barcelona at the Rialto Cinema this morning. I felt in need of comedy. I wanted comedy. What I got was desperate, melancholic fantasy that was depressing because of its undercurrent of truth--despite the stereotypical characters (the naive American tourist in search of something, the latin lover, the tortured artist).

It was funny, actually, but it was funny mostly because it points out that we are so hopelessly burdened by desire that laughing and suicide seem the only sensible responses. Perhaps art is the more useful response open to a few gifted people? Sometimes it seems miraculous that anyone is happy. Is Buddhism the answer?
One odd thing was the narration. I had an aural hallucination. It was not Woody Allen's voice, but I kept hearing it in his voice, because it was, in fact, his voice.
Vicky Cristina Barcelona was entertaining, but don't let anyone tell you it's a comedy.
Posted by Colin Talcroft at 12:24 PM 1 comment: 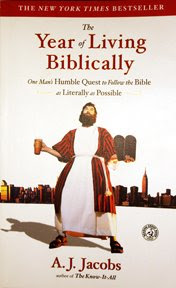 I just finished The Year of Living Biblically: One Man's Humble Quest to Follow the Bible as Literally as Possible (Simon & Schuster Paperbacks, 2007), by A. J. Jacobs. As the title suggests, the book is a chronicle of the author's attempt to spend a year following the numerous recommendations, strictures, and commands of the bible literally (focusing on the Old Testament in the first part of his biblical year, the New Testament later in the year). He makes a point of ignoring convenience, vowing to obey all of the rules, not just the easy ones or the ones that seem sensible--not killing, for example.

He shuns clothes made of linen and wool. He attempts to stone an adulterer (although he doesn't try very hard in this case). He learns to play the ten-string harp. He wears white clothing. He grows a long beard. He sacrifices a chicken. He goes forth and he multiplies (his wife has twins near the end of the year).

The book is an absorbing mix of the comical and the serious--one man's spiritual evolution. I must admit that I picked it up expecting to be more amused than enlightened, but it turned out to be deeper than it first appeared. The author is honest about his secular upbringing and his skepticism, but also about the unexpected changes in his thinking that occur as a result of living biblically for a year.  I found myself also enjoying the glimpse the book gives of the author's wife, who has to put up with the project.

Recommended. I may read this author's other book now. In that one, he reads an entire encyclopedia A to Z--something I've considered doing myself, although we all know it's one thing to consider something and quite another to actually do it.
Posted by Colin Talcroft at 10:06 PM 1 comment:

The Crassula--I think it's a Crassula--under the kitchen window started blooming today. So far only a few buds have opened, but soon the plants will be covered with masses of yellow star-shaped flowers. 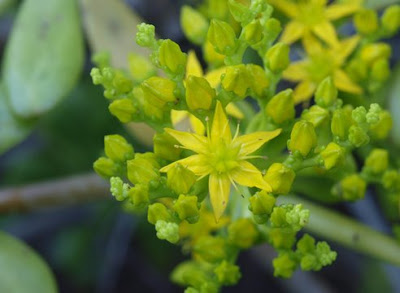 Posted by Colin Talcroft at 10:20 PM No comments: 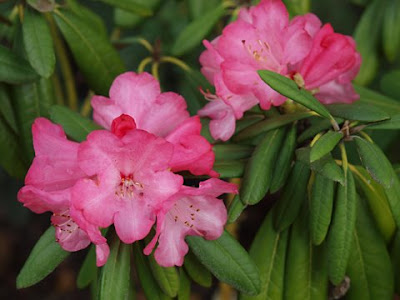 Another rhododendron began to bloom today, the bright red one called "Noyo Dream," planted under the bird feeder (it fades to pink). This seems very early to me, but part of the reason I've decided to record first bloom dates for the plants in the garden this year is to get a better sense of what is normal.
We had 0.6 inches of rain overnight. I remembered that I had a rain gauge stuck in a box somewhere. I dug it out the other day. Now I'll know exactly how much rain we've had without having to look up Internet approximations based on other locations. The rain over the past weekend was just under one inch. According to the one site I do regularly monitor, we are 6.12 inches below normal at the moment. Only two weeks ago we were more than 8 inches behind, so that's progress.
Posted by Colin Talcroft at 10:30 AM No comments:

I figured out today that the small black-and-white woodpeckers we often see here are not downy woodpeckers or hairy woodpeckers--as I had thought them to be. These last two, I see from a careful look at the Western Birds book, have fairly broad white stripes longitudinally down their black backs. The small woodpeckers common here have a ladder-like horizontal pattern of white stripes across their backs. All three birds have a similar pattern of black and white on the head with a red crown. However, I see now--in a minor ornithological embarrassment--that I have misidentified these birds for many years. They are Nuttal's  woodpecker.
The upside is that I get to add a new sighting to my list. I think that makes 34 species observed in the yard here.
Posted by Colin Talcroft at 12:14 PM No comments: 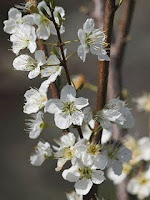 Last year I planted a small Santa Rosa plum as a pollinator for our pluot trees ("Dapple Dandy" and "Flavor King"). The tree is still just a stick, but its first blooms opened today. I'm happy to see that the blooms overlap with the flowering of the trees it was intended to give a boost to.

If the rain ever stops, the bees may get out and do some pollinating.
Posted by Colin Talcroft at 3:39 PM No comments:

The Schoenberg, being a subtle piece entirely for stringed instruments, relies on precise hand-offs from section to section and contrasting textures to be successful. The muddy Sunday performance caused the whole thing to sound like one monotonous blur, I'm afraid. Ohlsson was good in both the piano pieces. His speed and articulation were something to marvel at, but the orchestra behind him again seemed disjointed and not always in synch with him--or the conductor. The Nocturnes left me with the same impression of muddiness that the Shoenberg did. It's a shame. In the eight years I've been listening to the orchestra it has made tremendous strides (under Jeffrey Kahane). On a good night, it can be startlingly good. I begin to wonder about the rapport between the performers and the new conductor, Bruno Ferrandis.

Perhaps other performances of this program were better. I don't know. I do know that I was not alone in my disappointment on Sunday. The Santa Rosa crowd usually will give just about anybody a standing ovation. There was none on Sunday, and that's the first time that's ever happened in my eight years of attending Santa Rosa Symphony concerts.
Posted by Colin Talcroft at 10:21 PM No comments:

Is it just me that thinks the Oscar statuette looks rather like the robot Gort from The Day the Earth Stood Still? Minus Gort's slit eyewear and cute underwear, of course. (Oscar photo © AMPAS)
Posted by Colin Talcroft at 2:24 PM No comments: 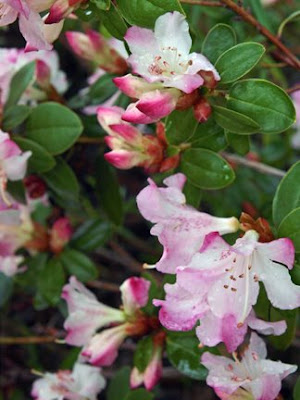 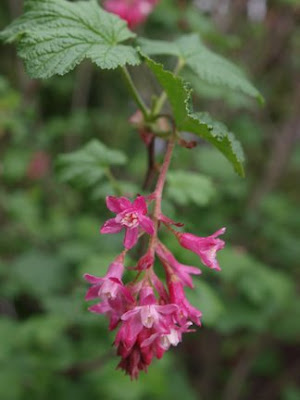 First blooms today on the low, pink rhododendron by the bird bath called "Pink Snowflakes" (top photo).
Ribes Sanguineum, the native pink currant began blooming yesterday, February 21. Rain again most of last night and all day today again. We seem to be catching up, but we are still about 6.5 inches below normal for this time of year.
Posted by Colin Talcroft at 2:16 PM No comments: