Miscellaneous: Caramel is a Three-syllable Word

It annoys me that so many people say "karml" when they mean "caramel"--the familiar product of sugar and heat. Yesterday I had an experience that was particularly annoying: In a Starbucks I saw a big, hand-lettered chalkboard sign promoting the latest coffee drink. The concoction was described as being "carmelly smooth." Have people started spelling it as if it were two syllables, too?

(Photo by Evan-Amos, from Wikipedia.)
Posted by Colin Talcroft at 4:29 PM No comments: 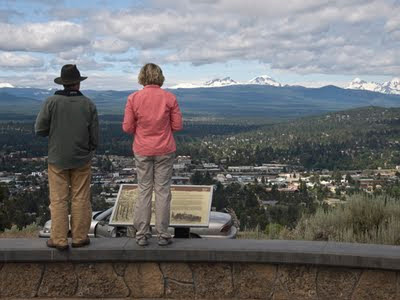 Got a late start this morning. I was tired. I slept late. Eventually, I started my day in Bend with a walk around some of the shops in the old downtown area. I wandered into one that specializes in odd things from Japan--everything from Pokémon and Hello Kitty goods to books on the game of Go. The woman working there told me the old downtown was down and out 15 years ago, when she moved into the area, but it prospers now, mostly in restored turn-of-the-century (early 1900s) brick buildings. I then headed over to Pilot Butte, a cinder cone created by extinct volcanic activity virtually in the middle of the town. It gives a panoramic view of Bend and the landscape around it--more cinder cones at varying distances, snow-covered volcanic peaks in the far distance, some of the latter in the classic cone shape, others eroded by glaciation. There's a road to the summit, but also a walking trail. I strolled a bit, with my binoculars, of course. I saw a nice Ash-throated Flycatcher and some bright yellow clumps of wildflowers that I didn't recognize. The ground was littered with red pumice-like stones, the cinders. They seemed natural here, but I was put in mind of annoying "lava rock" litter on suburban sidewalks where the landscaping is unruly.

Next I set out to find Shevlin Park, a large wooded park north of Bend with a fast stream through it that came recommended for birding. It was very badly signposted. I was about to give up on finding it when I accidentally came across it on my GPS (it wasn't there the first time I looked). I took an hour's walk through pine woods and scrub and then along the river on my way back. It turned out to be an excellent spot. Got a new life bird--Green-tailed Towhee. In places the trees were alive with chickadees--both Black-capped Chickadee and Mountain Chickadee, I believe, and nuthatches. Got a good close-up look at a Hairy Woodpecker. The Northwest subspecies is distinctly buff-colored where ours are white. I saw a Lewis's Woodpecker and a wren and a flycatcher I'm still trying to figure out. More life birds? 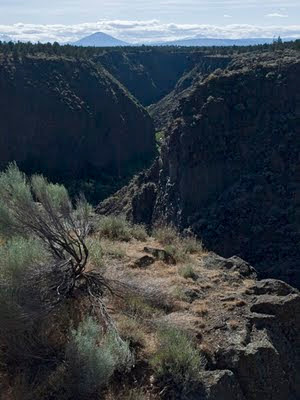 Headed north from Shevlin Park out of Bend through Redmond and Warm Springs and then northwest into the Portland area. Not far beyond Bend I drove by a sign that referred to Peter Skene Ogden (the man Ogden, Utah is named after) and a scenic viewpoint, so I turned around to take a look. Beyond a large parking lot surrounded by signs with warnings about attending to children at all times, about keeping dogs on leashes (one said "Many dogs have died here") was a low stone wall. You don't see the steep (300-foot) drop-off just beyond the wall until you're right on top of it. The vista point gives access to stunning views into a gorge cut by the Crooked River and of the three bridges that span the gorge. One is an old railway truss bridge, one is a road bridge, built in 1927 (and, according to one of a number of informative signs, the highest, single-span road bridge in the US when it was new), the third is a modern road bridge (opened in 2000) built to replace the bridge of 1927, which is closed to traffic, but open to pedestrians. The view is pretty spectacular. I'm glad I stopped and went back. Turkey Vultures, Violet-green Swallows, and Swifts were flying in the gorge.

The rest of the day was spent driving through scenery that was pretty, but not up to the level of yesterday. Dinner tonight at Caffe Mingo (503 226-4646, serving until 10:00PM weekdays, 11:00PM weekends), in northwest Portland (807 NW 21st St., the "Alphabet District"), where I write this. Not too expensive, excellent food. Citrus-marinated olives (some of these are Castelvetrano olives, some taste like they've been marinated in hazelnut oil); artichokes crusted with garlic; braised chicken and mushroom risotto; washed down with a glass of Garofoli Verdicchio. Friendly, neighborhood atmosphere, a number of communal tables, an excellent wine list. About half the customers appear to be regulars--always a good sign--with the waiters and waitresses calling customers by name. There is no Wi-Fi connection here, but the connection is good from the restaurant next door, (Serrato, which also looks interesting). Recommended. Now, it's time to look for a place to sleep.... I may stop here again on my way back--if that works out.
Posted by Colin Talcroft at 11:44 PM No comments: 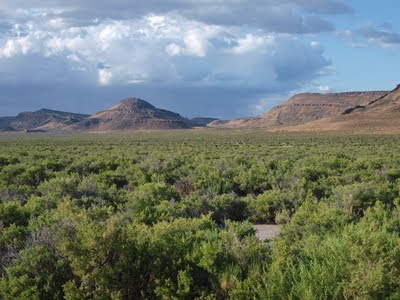 I'm now having a late dinner (10:00PM) at a McMenamins brew pup in Bend, Oregon, having left Reno this morning. I have yet to find a hotel, but first things first. I took a quick drive around Reno before heading out. I see that there are some older, more interesting neighborhoods, but I took only a quick look. Nothing startlingly interesting--although I did happen to drive by an odd house (?) that looked like a Hawaii-themed campsite, if that makes sense. It looked like what might be called a "folk art environment." Hmmm.... No idea what it was, but it may warrant investigation next time I'm in that area.

Hit the road fairly early, heading first for a place called Honey Lake Wildlife Area, along the northeast shore of Honey Lake. I walked around a bit and saw some birds, notably, dozens of Nighthawks both flying around the way they do, looking for insects on the wing, but also perched in trees, which I've never seen before. Nighthawks are one of my favorite birds. I used to love to watch them at dusk in Ohio, behaving like bats. They don't live where I live now, so it was a lot of fun just to see them. There were many Western Kingbirds (very noisy), a couple of Kestrels, many Brewer's Blackbirds and Red-winged Blackbirds, including at least one that appeared to be a Tricolored Blackbird. There was a Yellow-headed Blackbird as well, and a solitary Spotted Sandpaper.

The rest of the day was mostly spent driving north on Hwy. 395 and then Hwy. 31 and Hwy. 97, to Bend--a long haul, but vastly more interesting than equivalent drives through Nevada or Kansas. At least the scenery was varied and interesting. It was rough and parched in some areas, with exposed rock seams pushing out from softer, eroded rock, looking like gigantic fossil bones. In other places there were lush-looking grasslands and wildflowers--many purple lupines--and always mountains in the distance. About half way along the route, I passed a second large lake, which appears to have been Lake Summer. As I approached Bend, a snow-capped volcanic cone appeared, which may have been Mt. Bachelor. In several places along the route I dodged thunderstorms like then one pictured above.
Posted by Colin Talcroft at 2:26 AM No comments:

On the Road: (Pacific Northwest, 2011) Santa Rosa to Reno 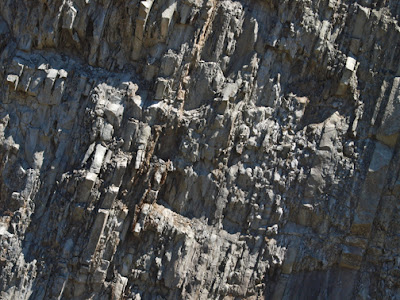 Drove the slow route, through Winters on my way east and north from Santa Rosa, heading for the Lake Tahoe area. These are mostly familiar roads. I stopped at Lake Berryessa, near the Montecito Dam to look at the interesting rock formations there--places where sedimentary strata have been turned completely on their side. Stopped here and there to look for birds, but didn't see anything of interest. From Winters I took the freeways, as it was getting late. As it is, I didn't arrive in Reno until about 8:00PM. I had trouble finding a place to eat that was still open at 9:00, which seems bizarre in a casino town, but I found a 4-star hotel room for $27 dollars using Hotwire--first time I've ever done that, but it was brilliant. Had a nice glass of Loire Rosé at an excellent little wine bar called the West St. Wine Bar (148 West St.). Dead on a Tuesday night, but, as a result, had a long, interesting conversation with the man behind the bar, Chase, who had lived and worked in Italy. Very friendly, very knowledgeable. He recommended a restaurant around the corner that serves late, where I had a tasty grilled cheese sandwich--a very late dinner. He told me about an old section of town that I plan to check out on my way out of town--heading north on Hwy 395. The sunflower field below was between Winters and Davis. 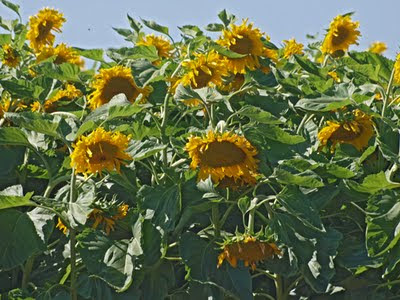 Posted by Colin Talcroft at 10:56 AM No comments:

Email ThisBlogThis!Share to TwitterShare to FacebookShare to Pinterest
Labels: Colin Talcroft, Nevada, On the Road, Reno 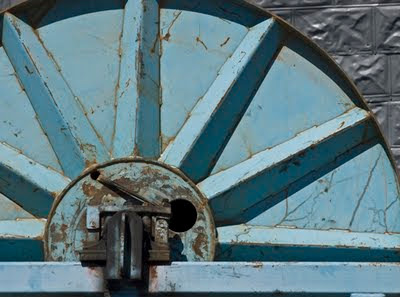 Not long ago I was in Geyserville for the first time in a long time. I visited an interesting little wine bar called Locals. Parked across the street was a PG&E cable truck with large wheels of cable mounted on the back. Looked like art to me. Found art.

For more found art, see my blog Serendipitous Art.
Posted by Colin Talcroft at 9:28 AM No comments: