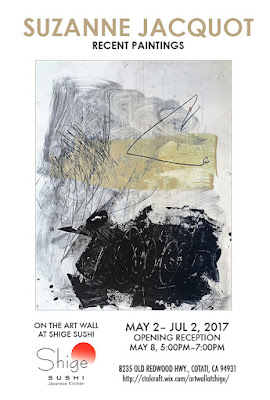 This week is the last week to see the Contemporary Bay Area Photography show on The Art Wall at Shige Sushi (through April 30). Next up is a solo show of recent paintings by Suzanne Jacquot. Opening May 2. Opening Reception May 8, 2017 5:00-7:00PM. The show will run through July 2, 2017.

For more information, visit the Art Wall website.
Posted by Colin Talcroft at 7:41 AM No comments: 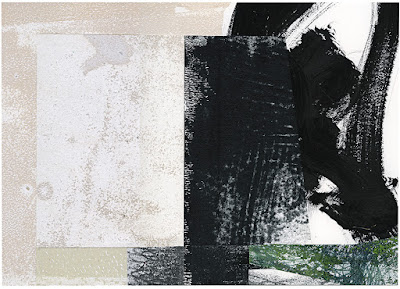 A new collage. This one combines a bit of calligraphic gesture with a geometric array—a self-contained diptych of sorts. Untitled Collage No. 172 (Santa Rosa). April 4, 2017. Acrylic on paper, acrylic monoprint, collage. 32.2 x 22.0cm (12.7 x 8.7inches). Signed on the mat. Signed and dated on the reverse.

Click on the image for a larger view. For more of my collage work, visit my collage site at http://ctalcroft.wix.com/collage-site.
Posted by Colin Talcroft at 2:20 PM No comments: 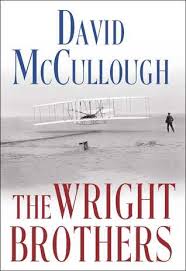 David McCullough's The Wright Brothers (Simon and Schuster, 2015) tells the familiar tale of two bicycle makers from Dayton, Ohio solving the fundamental problems of sustained, controlled, powered flight by dint of persistent hard work. McCullough doesn't dwell on the very early lives of the brothers nor does he detail the protracted legal issues Orville Wright dealt with to the end of his life, long after the principles of powered flight were well established. These and other loose ends tied up in a short epilogue. The book mainly covers the period starting from around 1900-1901, when the brothers finally realized that much of the available information about flying was simply wrong and that to fly would require starting from scratch—methodically accumulating data about airfoils and control strategies.

It is remarkable that it took them less than three years to do that; they first flew at the end of 1903. McCullough ends the main part of his narrative around 1910, by which time there was no doubt about who had first made nearly all the discoveries that led to manned flight. I had read before that Glenn Curtis invented the aileron, but McCullough points out that the idea of the aileron had already been suggested by the Wrights themselves in a 1906 patent as an alternative to the wing-warping method of control they initially used. None of the Wright patents was ever successfully challenged.

Having myself lived in Dayton from 1970 through 1977, through middle and high school, it was fun to read about places I know in the city and nearby. Huffman Prairie, where the Wrights first really learned to fly after returning from Kitty Hawk, is now part of Wright-Patterson Air Force Base (technically, in Fairborn, I believe). I'm distantly related to the Huffmans after which the prairie (and nearby Huffman Dam) was named. My grandmother is buried in Dayton's Woodland Cemetery, a stone's throw from the Wright brothers, their sister Katharine (who gets a lot of deserved attention in the book), and both their parents.

I knew the Wrights had demonstrated their planes in Europe after the US government initially showed little interest in the airplane, mostly in Paris, Berlin, and later Rome, but I hadn't known that the brothers also flew demonstrations at Pau, in the Pyrenees. The book is full of other interesting detail, but it never seems cluttered. McCullough's style is crisp and to the point. It's a quick read both because of the clarity of the prose and the inherent interest of the subject. Recommended.
Posted by Colin Talcroft at 10:48 AM No comments: