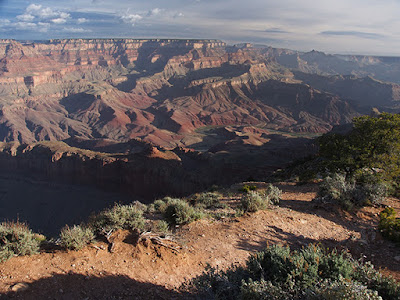 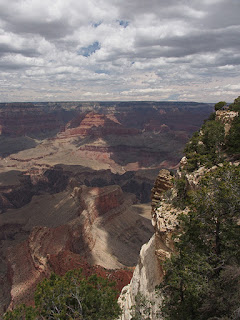 On the road, truly. No time to write much today. Suffice it to say that the Grand Canyon is as beautiful as they say it is. Monumental in scale and constantly changing in aspect as clouds pass over and the light changes. 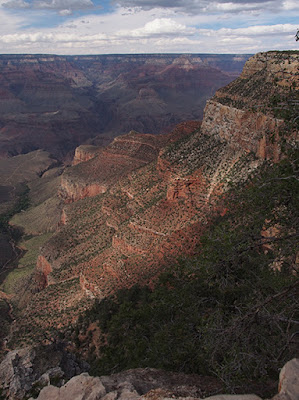 Here I post views from the easily accessible rim trail along the south canyon rim The third of these (left) is a view from Pima Point where I had gone to watch the sunset. The rock faces change color dramatically as the sun drops below the opposite canyon rim. About an hour before sunset, a bank of heavy clouds rolled in, however, blocking the sun and the light display. On the opposite side of the sky a nearly full moon rose. I'll be up at 4:00AM tomorrow to try for sunrise over the canyon. 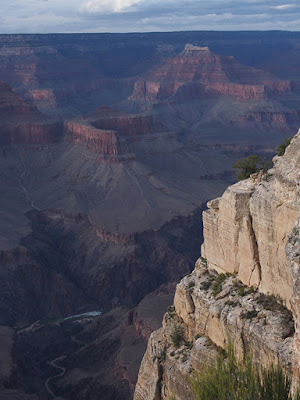 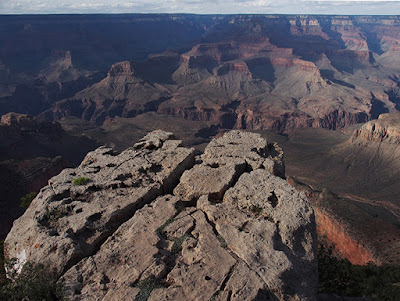 Posted by Colin Talcroft at 10:30 PM No comments:

Email ThisBlogThis!Share to TwitterShare to FacebookShare to Pinterest
Labels: Colin Talcroft, Grand Canyon, On the Road 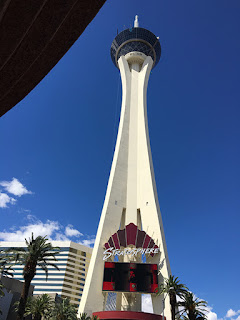 Following a day in Las Vegas, headed east toward the Grand Canyon. Looking to get views out over the city of Las Vegas (or, strictly speaking, the City of Paradise, Nevada, as the main Las Vegas strip is in that town) and into the desert, I went up the Stratosphere Tower--according to something I read, the highest observation tower in the United States, at 1,149 feet. I also rode the High Roller Ferris Wheel, the highest observation wheel in the country, at 550 feet. Both offer excellent views. The tower, although stationary, is somehow scarier than the slowly turning wheel, which takes about 30 minutes to make a revolution. It runs until 2:00AM. 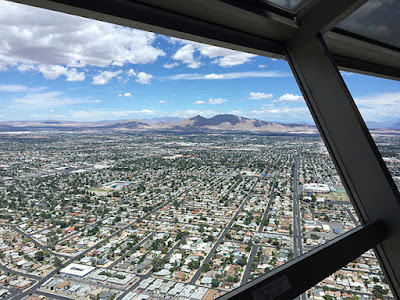 Las Vegas remains the pit of excess it always has been. The hotels are too big, the casinos are too big, the distances between them are exhausting. Gambling seems a fool's amusement, but I had a truly excellent steak dinner at Gallagher's Steak House, in the New York, New York Hotel complex. I'm not a big meat eater. In fact, I'd be quite happy vegetarian, but the Rib-eye steak I had, with a shallot and Beaujolais reduction sauce, was easily the best piece of meat I've ever consumed. 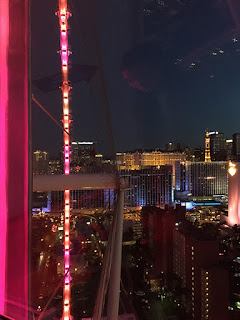 On the morning of 19th, I head out in the direction of the morning sun on the only road more or less that leads to the Grand Canyon. There's some picturesque scenery with scrubby vegetation, chollas, a few Joshua trees, and a show of spring wildflowers as well. Distant mountains, mostly eroded volcanic formations, provided a backdrop. I then road the Grand Canyon Railway to Williams, where I'm staying the night. Tomorrow I'll ride the train back to the canyon to start a day of photography there. Today I got only a glimpse, but it looks every bit as spectacular as people say it is. 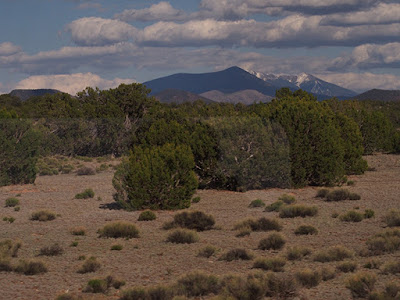 Posted by Colin Talcroft at 10:32 PM No comments: 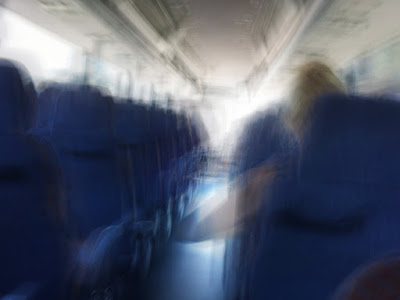 Just arrived in Las Vegas after an uneventful flight—although, annoyingly, I hardly got to see out the windows. I really don't understand people who have the opportunity to look at the world from 30,000 feet and never even open their window shades. I will make sure to get a window seat on the way home.

As always, I enjoyed looking at some of the exhibitions at SFO while waiting for my flight. In contrast, the Las Vegas airport is fairly dull. While I've been to Las Vegas before, I've never entered through the airport. Its only decorations seem to be kitschy slot machines.

SFO really is a treat to visit. I was able to see the show of pottery by Marguerite Wildenhain now on. I missed it last time I visited the airport because it is behind security and I wasn't flying. Some of her very early work in Europe is on display, including formal dinner ware she designed while working for a pottery company in Germany. I had no idea she had been at the Bauhaus for several years before eventually being hounded out of Germany by the Nazis. She ended up at Pond Farm, an artists' colony in Guerneville, by way of the Netherlands and Oakland, California. Most of the work on display is from her time at Pond Farm. Well worth seeing. The photo above is an abstraction made on the bus on the way to the airport. 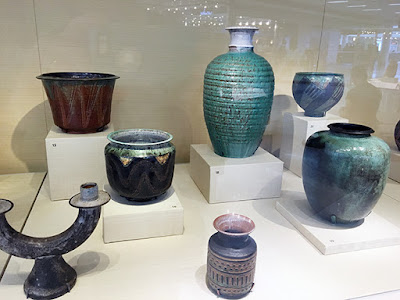 Posted by Colin Talcroft at 6:51 PM No comments: 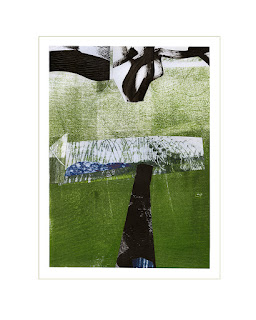 Feeling I didn't have enough green in my life, I made a stack of monoprints in green and black and in green and blue. From these will emerge new collage work. Here is the first such piece.

For more of my collage work, visit my collage site at http://ctalcroft.wix.com/collage-site. Click on the image for a larger view.
Posted by Colin Talcroft at 8:45 AM No comments: 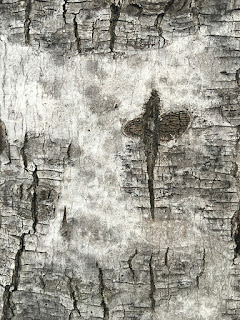 A cross-shaped incision in the bark of a tree and the background of natural fissures around it looked like art to me. Serendipitous Art.