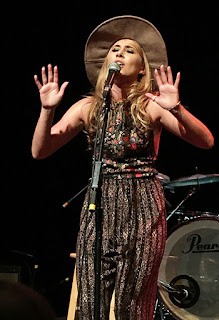 Last night. Haley Reinhart at the intimate (and slightly decrepit) Mystic Theatre, in Petaluma. First stop on the 2016 Better Tour, promoting her new CD "Better." I love her voice when she sings with the Postmodern Jukebox  people. This was more pop/rock in style (the first "rock concert" I've been to since probably Joni Mitchell, 1974 or so), but still fun. She did, at least, sing the gum commercial Elvis song that so nicely shows off her voice—"Can't Help Falling in Love."
Posted by Colin Talcroft at 11:03 AM No comments: 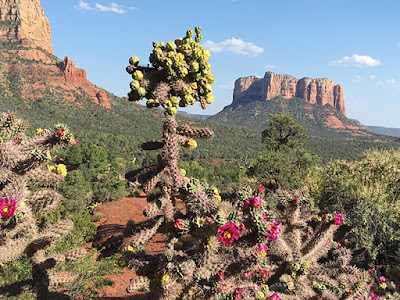 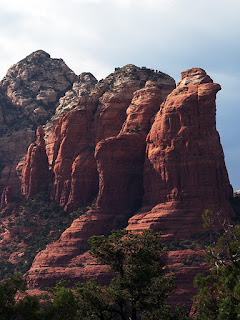 I left Monument Valley on the 25th and headed for Sedona, Arizona, one of those odd places that have almost completely lost their identity to tourism. Sedona is in an undeniably beautiful setting. The red rock formations are impressive, even if not as big as those in Monument Valley and not so impressively set off by empty space, and I imagine the town has its charms, but virtually the entirety of the main street (and there is only one main street) is bad restaurants and tourist shops catering to those who come for the "spiritual energy" the place is supposed to exude. There are psychics and fortune tellers, yoga and meditation shops, and many stores selling rocks, minerals, and crystals—rocks, minerals, and crystals all laid out with tags describing their supposed powers. Practically none of these have any connection to Sedona geologically speaking. Inconveniently, Sedona is mostly red sandstone, which doesn't seem to possess much of interest to the spiritually minded. The minerals come from Argentina, South Africa, Brazil.... The hotel proprietor came from India, his office reeked amiably of curry. The place reminded me of Lourdes, in France. One thing I did like about Sedona is that all the intersections are roundabouts, which is great. 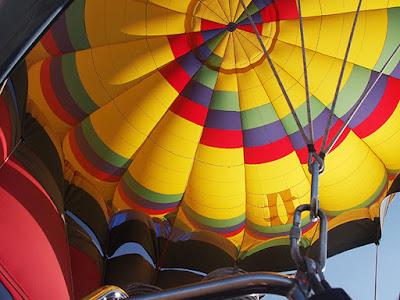 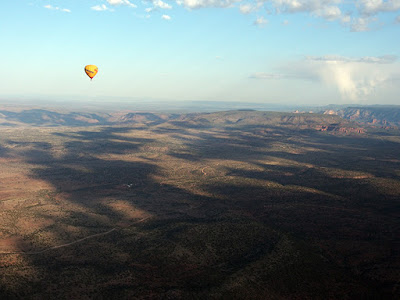 I did have the opportunity to see Sedona from the air, however, in a hot air balloon, which was a pleasure. It had been many years since my last balloon ride. The valleys around Sedona were set off in the early morning light by smoke from a forest fire burning to the north of the town. In places you could see smoke flowing over the hills and down into the low spots. Later in the day, I visited the Chapel of the Holy Cross, graciously shown around by Father Kieran, who is in charge of the place. Built in 1956, it's a modern piece of architecture but it sits comfortably in its niche in the rocks and offers excellent views over the town of Sedona and the surrounding rock formations, including excellent distant views of Cathedral Rock, Courthouse Butte, and Bell Rock. 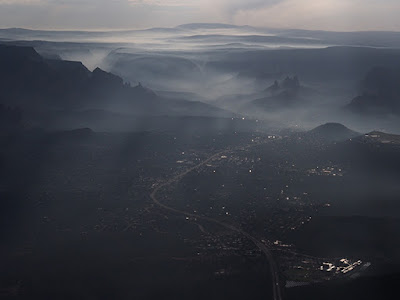 On the morning of the 27th I headed back toward Las Vegas, my starting point on this trip, which was a working trip, interpreting for a small Japanese film crew getting footage for a number of TV programs to air later in the year. At Peach Springs, on the way back, you can access the only drivable road down to the Colorado River within the Grand Canyon. It's a bumpy, unpaved 19 miles, part of the way through water, but it was not as bad as people lead you to believe, at least at this time of year, ahead of seasonal rains, which seem to come mostly in July. 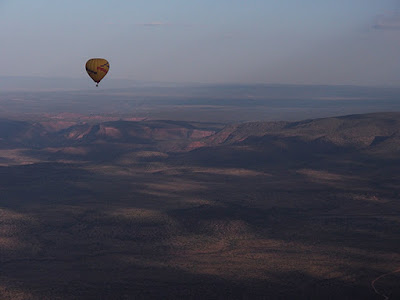 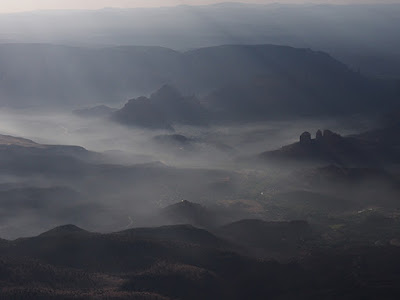 From the perspective of bird-watching, the trip was rather disappointing. I had few opportunities to get anything more than fleeting glances at anything. The Common Raven seems to be the most common bird. It's easy to see why ravens figure prominently in so many folk tales and in native lore of the area. Otherwise, I noticed a lot of House Sparrows and House Finches. Other birds included Great-tailed Grackles,  Scrub-jays, and Western Tanagers. At Desert View, in Grand Canyon National Park, I came across a flock of Chipping Sparrows, which  are fairly uncommon at home. In the canyon itself, there were many Violet-green Swallows and White-Throated Swifts. The only new birds I saw were a variant of the Dark-eyed Junco I've never seen before, also at Grand Canyon, either the Red-backed or Grey-headed variant—notably pale grey all over with black around the eye and a rufous patch at the rump—and the Juniper Titmouse (Baeolophus ridgwayi), at Airport Mesa, in Sedona. The Juniper Titmouse, a life bird for me, looks almost identical to our Oak Titmouse (Baeolophus inornatus), but I noticed its vocalizations were different. Some day I'd like to revisit the area as a birder.
Posted by Colin Talcroft at 3:34 PM No comments: 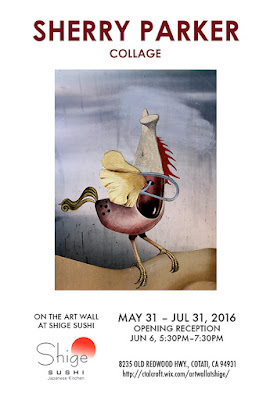 For readers in the San Francisco Bay area, I'm pleased to announce the next show on The Art Wall at Shige Sushi, in downtown Cotati will feature the surreal collage work of Sherry Parker. The show, opening Tuesday, May 31, will run through the end of July.