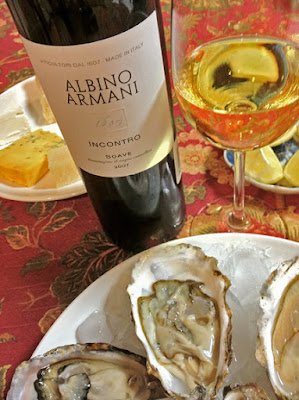 Tonight I tasted the 2007 Albino Armani "Incontro" Soave. I'm a fan of Soave. It's among my favorite Italian wines--when it's at its best--but the quality of Soave is highly variable. Sadly, most US consumers seem to know only the least interesting types.

The traditional growing zone, near Verona, in northern Italy, gets the designation "Soave Classico." "Soave Superiore" wines are theoretically better still. Areas around the Classico zone (not necessarily of the highest quality) were allowed to use the name "Soave" starting in 1968. Then, in the late 1980s, the rules for Soave were modified to allow the grape mix to be up to 30% Chardonnay, Pinot Blanc, or Trebbiano di Soave (the traditional Soave grape is Garganega). The expansion of the Soave zone and the changes in the rules seem to have caused Soave to polarize into the more common, simple, mass-produced wines usually made from overcropped Garganega delivered to local cooperatives on the one hand, and wines made in the Classico zone (or outside it) from carefully tended, low-yield Garganega vineyards, often with additions of other grapes. Anselmi, Gini,  and Inama are among my favorite producers in the latter category. There are surely many more that I've not yet had the opportunity to taste. This maker, Albino Armani, was new to me. Although this is not Soave Classico or Superiore, it has presence and it's significantly more interesting than the (ridiculously) low Grocery Outlet price would suggest. This wine in fresher vintages seems to retail at around $18. Tasting notes follow.

A very pretty, medium straw color with a hint of green in it. Hawthorne flowers, wood, and apples, on the nose--or is it pears?. Good concentration on the palate--not at all in the light, throw-away style of poorly made Soave. Delicate at first but with a wave of mid-palate fruity sweetness and a mild bite after the sweetness, followed by a hint of sweetness again. The wine then lingers long on the tongue with slightly bitter, woody hints that I liked very much. A bit low in acidity (most likely a trifle tired because of storage issues--the Grocery Outlet effect) but still in decent condition. As I say, I'd like this better if it were a bit crisper, but it's still quite enjoyable and a true bargain at only $2.99 a bottle at Grocery Outlet in Santa Rosa. If you buy this, however, don't sit on it; drink it up over the holidays. A good aperitif wine. Paired well with Miyagi oysters and, after dinner, a soft goat cheese.
Posted by Colin Talcroft at 9:10 PM No comments:

Last night we had a little rain finally--although not enough. We got about 0.3 inches. It was the firs rain since around Thanksgiving. It brings our total for the 2011-2012 rainy season to 5.05 inches, which is well below average. Average for this day in Santa Rosa is 9.7 inches.
Posted by Colin Talcroft at 5:33 PM No comments: 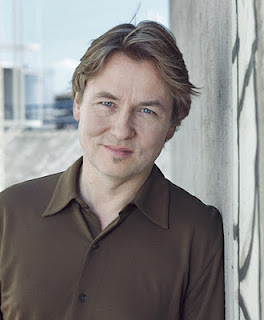 I attended the Thursday, December 8 performance of the San Francisco Symphony with guest conductor Esa-Pekka Salonen and soloist Leila Josefowicz. The program opened with Pohjola's Daughter, by Sibelius, followed by Violin Concerto, by conductor Esa-Pekka Salonen himself. After intermission, soprano Christene Brewer joined the symphony in excerpts from Wagner's Götterdämmerung. I enjoyed the Sibelius and even liked the Wagner, but the main reason I wanted to attend this concert was to hear the Violin Concerto and see Salonen conduct, particularly as he was conducting a composition of his own--and what a thrilling performance it was. Salonen is dynamic on the podium, using broad gestures with both hands to communicate.

It would be difficult to try to describe something so complex as Salonen's Violin Concerto in detail, but I can start by saying how impressed I was that Josefowicz played it from memory. The more abstract music becomes and the less dependent on devices such as themes and variations and development of themes, the more difficult it must be to remember. They say muscle memory takes over, but the feat of recall involved here was nearly as impressive as Josefowicz's playing, which was impressive indeed. 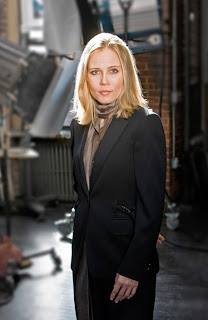 The Violin Concerto opens with the soloist unaccompanied and it starts as if already in progress. The intensity is high from the get-go and the music feels relentless until the more pensive middle sections. Josefowicz played the early portions with a look of fierce determination on her face, at times seeming possessed, at other times looking somewhat more relaxed--even smiling--but there was a palpable tension even in the quietest passages. Particularly interesting was the use of a very rich percussion session that included numerous gongs and much else that was hard to see seated in the concert hall.

The music seemed highly original--modern without being modern in the sense of being stylistically linked to what we think of as modern music when the word "modern" brings the early 20th century to mind. Surely this music has antecedents. Some sections reminded me of Khatchaturian's violin concerto. Some sections had the portentous feel of a dramatic film score. Some sections put me in mind of Shostakovich. In the later movements, there are passages that introduce the feel of pop music. Yet, the overall impression was of music new and different.When I hear stories about Mahler conducting early performances of his own symphonies or of Beethoven premiering a new piano concerto, I wish I could have been present. What's more exciting than the thought of being in the presence of genius as it presents new ideas to the world? I had the feeling that I witnessed a bit of history on Thursday--that I was present at the sort of performance that will be talked about in the future by people looking back, wishing they'd been able to see Salonen himself at the podium conducting his own compositions. The music seemed like a cantilevered beam reaching into the future, even if it's too soon to know exactly what might lie beyond the reach of that beam--what it might be creating a bridge to. This was one of the best concerts I've attended in a long time.

Doing a little research, I see that Salonen's Violin Concerto had its premiere in April 2009, with Josefowicz as the soloist, and that it was written for her. I won't be surprised to see it enter the standard violin repertoire; it's likely to be played for many, many years to come. I was also able to confirm that Josefowicz is about four months pregnant, as she appeared to be--what it must sound like to the baby in there....

Photo of Esa-Pekka Salonen by Sonja Werner. Photo of Leila Josefowicz by Henry Fair. Photos Courtesy of the San Francisco Symphony.
Posted by Colin Talcroft at 11:06 PM No comments: