I attended the October 26 performance of the San Francisco Symphony at Davies Symphony Hall. On the program were Wagner's Prelude to Act 1 of Lohengrin, Mozart's Piano Concerto No. 22, and Brahms's Symphony No. 4. Jaap Van Zweden was to have been the guest conductor, but he cancelled for some reason. Asher Fisch conducted in his place. David Fray was the soloist in the Mozart concerto. Both Asher Fisch and David Fray were new names to me. Fisch appears to have conducted a lot of opera. He is Principal Guest Conductor of the Seattle Opera, but he will take over as Principal Conductor and Artistic Advisor of the West Australia Symphony in September 2013. Fray studied at the National Superior Conservatory of Music, in Paris. He made his professional debut with the Cleveland Orchestra, in 2009. He records for Virgin Classics.

I didn't know what to expect from conductor Fisch, but I must say I enjoyed the entire concert--even the Wagner, and Wagner is not usually to my taste. I thought the scintillating, overlapping opening section especially well done. The Mozart was enjoyable--perhaps a bit too "correct"--but fun nonetheless. My main complaint about Mr. Fray's playing (besides a hint of muddiness here and there in some of the faster, more intricate passages, mostly in the first movement) was a certain disconnectedness. It seemed as if he were analyzing the music rather than playing it--if that makes sense. He was, in fact, playing, of course, and the second movement was handled very well, I thought. 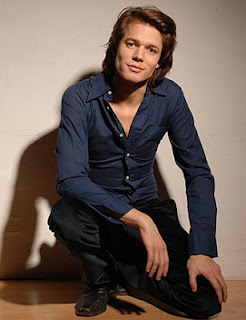 I find it hard not to comment of Mr. Fray's overall demeanor. He plays rather slouched at the piano and he likes to throw his hands off to the side of the keyboard at the end of a loud passage as if to say "take that!" Although he looked mild-mannered relative to some pianists (Melvyn Tan comes to mind), his exaggerated gestures were a bit much. Most of the time, his brow was furrowed and he appeared to be scowling. He gave me the impression of being angry at the keyboard for some reason--as if the keys had just insulted his mother and he wasn't going to stand for it. It all got a bit annoying. I listened to much of the performance with my eyes closed because to watch him play was distracting.

Having said all that, I think Fray is a good pianist. He has a strong left hand and seems to like to emphasize the rhythms of the harmonies behind the main melodic lines of the music. I immediately thought to myself that he's probably an excellent interpreter of Schubert and I imagined he'd play the Impromptus and the Moments Musicaux well, in particular. I was delighted to see at intermission that he has recently recorded these and that he'd be signing CDs after the performance. At home the following day, I listened to the Schubert recording I purchased for an autograph, and I wasn't disappointed. There are idiosyncratic passages--a few fleeting descents into bombast--but otherwise very enjoyable. Mr. Fray is, indeed, an interesting interpreter of Schubert and one that I hope will grow. I look forward to following this young man's career. Perhaps he will begin recording the Schubert sonatas before too long. I hope he'll be back in San Francisco soon.

I thought Fisch's interpretation of the Brahms symphony excellent and the playing mostly perfect. I had a few nits to pick, lined up in my head as I listened, but at this remove I can't remember what they were--which is to say they were probably trivial. I do remember thinking that the conductor rushed the fourth movement just a little, but otherwise, the piece was very nicely done--lush, emotionally invested, but not overdone. The horn section was a standout and the long pizzicato passages were handled by the strings with conviction. I was a little apprehensive at first about the change in conductors, but I'd be very happy to see Asher Fisch leading in San Francisco again. I hope he returns sooner rather than later.

The highlight of a quick meal after the concert at Absinthe (besides the lovely Kimberly at reception making quite a statement in a bright red shirt set off by a wide back belt) was encountering a new wine grape called Pellaverga Bianco, which had a wonderfully smokey character to it (at least in the wine I enjoyed). This is a grape to explore further. It appears to be confined to the Piedmont region of Italy.

Photo of David Fray courtesy of the San Francisco Symphony

Posted by Colin Talcroft at 7:31 PM No comments:

We've had more rain in the past few days, but it was dry today (if overcast) and sunshine is in the forecast. We've had 1.05 inches of rain since last reporting, bringing our total so far to 2.45 inches, which is about normal for this time of year.

[Update: Additional sporadic rain has added another 0.10 inches to the total as of November 10. The total is now 2.55 inches.]
Posted by Colin Talcroft at 6:20 PM No comments: 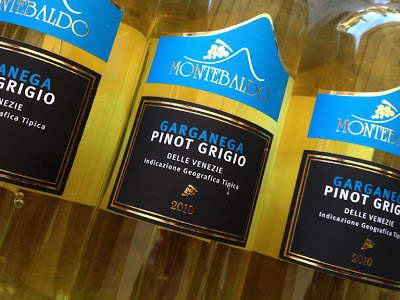 Tonight I tasted the 2010 Montebaldo Garganega/Pinot Grigio, an inexpensive wine I picked up at my local Grocery Outlet. It turned out to be light but tasty--just the sort of thing to go with pasta and pesto sauce. This wine, from the area around Venice,  is 70% Garganega, 30% Pinot Grigio, the latter emphasized on the label, probably on the assumption that fewer people are familiar with Garganega than Pinot Grigio, but Garganega is the grape that makes really good Soave good, and this wine had many of the characteristics of a well made Soave. Brief tasting notes follow.

Medium straw color. Simple grapey scents, but also with a suggestion of something nutty. Perhaps scents of candied citrus rind as well. Overall, a bit distant. Light on the palate as well, but not at all without interest. Nice balance between a ripe but delicate fruitiness and a lingering crisp acidity. Moderate to good length with the finish marked by nutty flavors and a very slight bitterness. In no way profound, but tasty wine nevertheless. Very attractively priced at $4.99 a bottle at Santa Rosa Grocery Outlet. Recommended for everyday drinking. I went back to buy a case of this. Perfect with pesto (as noted above). I bet it'd be good with other pasta dishes not using a tomato sauce (white clam sauce, perhaps?), with herbed fish, or with a simply flavored pork dish.


(I have no financial connection with any producer or retailer of wine.)
Posted by Colin Talcroft at 8:16 PM 1 comment: 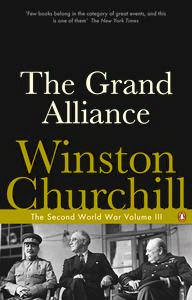 I've now finished the third volume of Winston Churchill's six-volume history of WWII The Second World War, this one entitled The Grand Alliance. The scope of this third volume is fairly breathtaking, following the escalation and expansion of the war as Germany and Italy move east through the Mediterranean, threatening Egypt, as Hitler turns on the Soviet Union, and as Japan attacks the United States in Hawaii and British and Dutch possessions in Asia, bringing Great Britain, the United States and the Soviet Union into a grand alliance of nations united by the goal of defeating the Axis powers.

As in the previous volumes, Churchill tells the story in the first person and mainly from the perspective of British activities. It again relies heavily on "directives, telegrams, and minutes upon the daily conduct of the war and of British affairs"--documents mostly written by Churchill himself during the conflict. These are supplemented by the author's retrospective analysis of events. At the end of the volume, I was left with a much better understanding of the relationship that developed between Churchill and President Roosevelt and of Stalin's character as revealed by communications between Churchill and Stalin. Churchill's calmness and confidence are remarkable throughout. While recognizing that winning the war will be painful and time-consuming, from a very early date he understands in broad outline how events are likely to unfold and he is unshakeable in his conviction that the Allies will win. This is not bluster. His view is based on rational analysis. In particular, Churchill understands the immense importance of now having the wealth of the United States behind Britain, which remains mostly in retreat through the period covered by this volume (1941).
Posted by Colin Talcroft at 5:27 PM No comments: