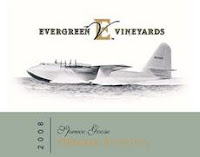 Here's another bargain from Grocery Outlet, the 2008 Evergreen Vineyards "Spruce Goose" Oregon Pinot Gris. A pretty, pale gold in the glass, it offered a nose suggesting green apples and limes, but with something musky going on in the background. Unlike some Pinot Gris, the Spruce Goose has a little presence--seeming at first fruity and sweet (the sweetness of fruit, not cloying sugar--although this does have some residual sugar) and then tangy, with a lingering finish that reminded me of a nice, tart lemonade (just barely sweet, refreshingly acidic). The tartness lingers for quite a while on the tongue. As with most wines in this price range, the Spruce Goose Pinot Gris is in no way profound, but I'd call it acceptable for everyday occasions. Attractively priced at $5.99 at Grocery Outlet in Santa Rosa. This is the sort of wine I like to have on hand for gatherings. It's sufficiently interesting to please wine enthusiasts in an informal setting (that is, in a setting that's not about the wine), but not the sort of thing I'd regret opening for people who don't really appreciate wine. I went back for a few bottles.

[Update: I subsequently tried the 2009 Spruce Goose Oregon Pinot Noir, but that wine was of little interest. Inexpensive Pinot Noir is rarely worth the money, and this wine was no exception.]

I have no financial connection with any producer or retailer of wine.
For more wine reviews, use the Wines I'm Drinking label.
Posted by Colin Talcroft at 9:11 PM No comments: 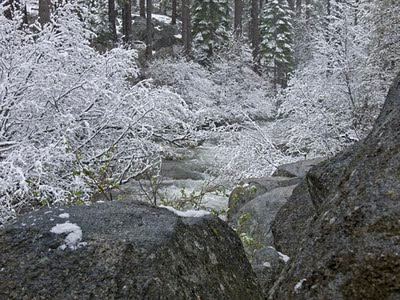 Spent the long weekend camping at Grover Hot Springs, in Alpine County, which is in the eastern Sierra Nevada Mountains, about 30 miles south of Lake Tahoe. The trip was booked in February. Who would have expected snow? That's what we got--about three inches. Had to use chains to get to the campground. The high over the weekend was about 45, the lows were well below freezing. It reminded me of may days as a Boy Scout, camping in the winters of southern Ohio. It was cold, yes, but nothing a good campfire, friends, and a few bottles of wine had trouble curing. 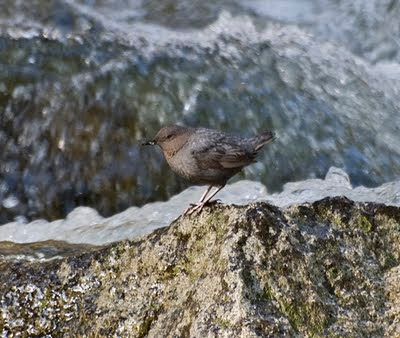 I was able to do a little walking by myself, getting up on the last morning at about 6:00AM to see what birds might be around. The highlight was getting to see a pair of American Dippers--a fairly uncommon and elusive bird, a life bird for me that brings my total to a modest 334. Bizarrely, Dippers swim underwater, using their wings the way penguins do. They can dive to as much as 20 feet and walk along the bottom of swift streams moving with enough force to knock a person down. They seemed quite content to hunt for the insect larvae they feed on in water that would have been frozen if it hadn't been moving. They have specially adapted nostrils that close underwater and a third eyelid that protects the eye under water. When a Dipper blinks, its eye appears to turn white momentarily. Very interesting to see these birds diving and swimming and zipping up and down the river channel at high speed. The Dipper even sings with a wren-like voice that was audible over the roar of the rushing water. 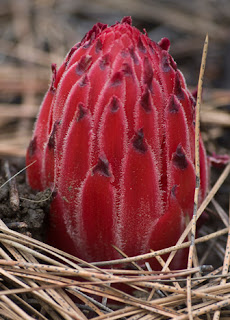 Here and there amongst the pine needles I kept seeing red blobs that turned out to be plants poking up out of the ground. I looked them up. They appear to be called Snow Plant (Sarcodes sanguinea), uncommon and native to conifer forests of the Northwest. It is called Snow Plant because it typically appears as the last snows are melting. Snow Plant is mycotrophic. That is, it has no chlorophyll of its own. Instead of synthesizing its own food, as most plants do, Snow Plant gets nutrients from the mycorrhizae (or "fungus roots") that many conifers have--essentially, very fine mycelia (fungus filaments) that bring nutrients to the tree, which in turn provides food for the fungus. Snow Plant taps into this system. My photo shows a Snow Plant just pushing up through the leaf litter. This "bud" will open up into a stalk about a foot high with tightly packed bell-shaped flowers, each with five fused petals. This plant is in the Indian Pipe family (Monotropaceae), related to the heathers (Ericaceae). 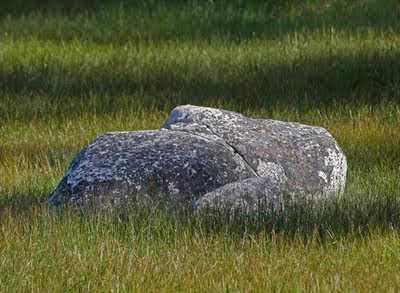 Well, I was wrong. The rain of a few days ago was not the last rain of the season. Since then, another 0.50 inches has fallen, it's still raining, and rain is forecast for the rest of the week. I'll have to leave the grapes until the rain stops and then spray them with sulfur again. I hope the rain won't affect flowering and fruit set too badly. Rain this late in the season is rare, but not unheard of. By the end of the week it looks like rainfall in the 2010-2011 season may have topped 40 inches (the historical average for Santa Rosa is 31.9 inches), making this one of the wettest years in a long time. As of the end of June 1, our total was 39.15 inches.
Posted by Colin Talcroft at 11:28 AM No comments: 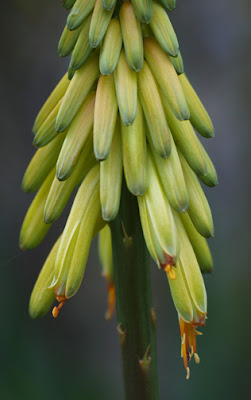 First blooms this past Friday (May 27) on the Aloe striatula in the garden (below the kitchen window). This has been one of the most successful of the aloes I've planted here. It was growing nearby when we moved in, so I was pretty certain it would do well--and it has--but it tends to get a bit leggy. Cut back severely, it seems happy enough to sprout new growth, so the time has probably come to take cuttings. 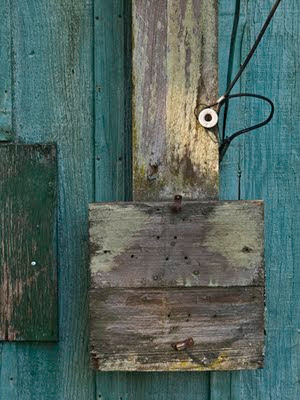 On a walk around the Santa Rosa Rural Cemetery not long ago, I found this little scene on the side of a green shed. It looked like a collage or a small sculpture. Found art.

For more found art, see my blog Seren-dipitous Art.
Posted by Colin Talcroft at 9:24 AM No comments: