Well into a stretch of hot, summer-like weather now, a cold rosé seemed appropriate this evening. I tried the 2008 Clos Clémentine Côtes de Provence Rosé, made from a blend of Grenache, Cinsault, Mourvedre, Syrah, and Rolle. It's one of those very pale, orange-tinged rosé wines so typical of southern France. The grapes used are all familiar except Rolle, which is most closely associated with the tiny appellation Bellet, in the extreme east of the Côtes de Provence, in the hills above Nice. According to Jancis Robinson, it's appreciated for its aromatic qualities and for its comparatively high acidity even when grown in very hot conditions. Recently it's been increasingly planted also in the Languedoc and in Roussillon. Some sources identify Rolle with the Vermentino of fame in Sardinia.

The wine doesn't offer a lot on the nose, but it has some pleasant melon scents. Light but flavorful on the palate with a comparatively low level of acid and a touch of sweetness lingering on a moderately long finish. A nice hint of butterscotch at the very end adds a little complexity. A good, simple food wine for hot summer evenings. Light and pleasant, but not in any way a standout. Reasonably priced at $3.99 at Grocery Outlet.

I have no financial connection with any producer or retailer of wine.


For more wine reviews, use the Wines I'm Drinking label.

Posted by Colin Talcroft at 9:40 PM No comments: 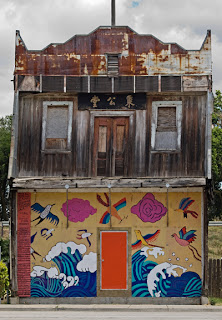 At the end of June, I took a trip up to wine country in Amador and El Dorado Counties, in the western foothills of the Sierra Nevada mountains, heading east on Route 12, taking SR160 through Isleton, and then heading north, ultimately going as far as Coloma, the site of the original Sutter's Mill, where the gold that sparked the Gold Rush was found. Isleton is a small town right on the Sacramento River that I've driven through on  bird-watching trips (the area is good for seeing Sandhill Crane during the winter months; nearby areas are overwintering grounds for hundreds of thousands of ducks and geese each year), but I'd never stopped in Isleton. The town is small, sleepy, and a bit run-down, but with interesting quaint touches here and odd bits of history hanging on there.

[Wine tasting is detailed at the end of this post.]

Like so many places in California associated with the Gold Rush (many hopeful miners passed through here from San Francisco on their way to the gold fields), the place was once bustling to a degree hard to imagine today. The population was many times what it is now (about 850) and riverboats stopped here. Especially interesting are the Chinese-style buildings that remain--evidence of the large Chinese population that once lived in the area. Some of the Chinese apparently farmed and operated stores, others worked building the levees and docks along the river. There is an extant Chinatown and, next to it, a Japanese section. I would have liked to have learned more about the history of the place, but the local museum was closed on a Thursday. Lunch at Maya's (formerly Orilla del Rio; 14133 Market St.) was good. According to my guidebook (Best Places: Northern California, Sasquatch Books, 2010), Isleton was once "the asparagus capital of the world." Today it seems to be best known for crawdads. There is an annual Crawdad Festival on the Father's Day weekend. Just missed it. 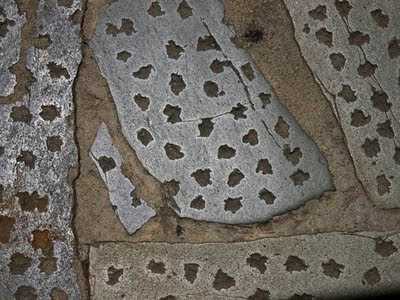 From Isleton, passed through Locke, Walnut Grove, and Lodi, and from there into Sutter Creek on Hwy. 88, passing along the north shore of Comanche Reservoir. The towns in the area of Sutter Creek along Hwy. 49--including the tiny Amador City, Jackson, Plymouth, Mokulumne Hill, and others--were all gold towns. They have something of the same feel as Isleton--tattered and abandoned in sections, but with vestiges of a surprisingly rich history. Some of the historic buildings in the area have been restored and put back to use. The rough-hewn stone sidewalks in Sutter Creek, polished by years of use, were particularly attractive in places (photo). Mark Twain once was a regular in this area. It was in a bar at Angel's Camp, about 30 miles to the south, that Twain heard the tale he later wrote as "The Celebrated Jumping Frog of Calaveras County," a story that helped bring him his initial fame. Had a good lunch on the "indoor patio" at Susan's Place Wine Bar & Eatery (15 Eureka St.) in Sutter Creek, but stayed the night at the St. George Hotel, in Volcano, California--a curious town with a curious name.

I know little about the geology of Volcano, but there doesn't appear to be a volcano in town. According to a plaque, early settlers thought nearby rock outcroppings looked like a volcano, so that's what they named the town. And why not? What Volcano does have is a deep sense of its own history; almost every building--and many other things in the town, including the fire bell and a Civil War cannon--has a plaque. Volcano is little more than a bend in the road, but there are two hotels--one at each end of the town--a post office, a few restaurants, and a bar or two (yes, each has a plaque). According to my guidebook, however, there were no fewer than 17 hotels in this tiny town during the gold boom.

I stayed at the St. George Hotel, dating from 1862, on the site of two earlier hotels that burned, the first built in 1853. The hotel's main restaurant is reputed to be excellent (as is the restaurant at the town's other hotel, the Union Hotel). Unfortunately, both restaurants were closed, but the hotel bar at the St. George serves decent food and has a good selection of local wines by the glass (I would call the place funky and friendly). There's a small park in the middle of town, about the size of a suburban house lot. In it are two plaques--one referring to a Christmas tree (no longer there) planted in honor of local boys during WWII, the other in honor of Carlo Andrea Dondero (1842-1939), described as "discoverer and founder of the California Carrera Marble Quarry," about three and a half miles southwest of the plaque's location. The monument points out that much of Stanford University was built with stone from this quarry and that many of San Francisco's civic buildings too, including City Hall. Who knew? If that weren't enough, Volcano seems to have had a long history of theater, boasting the first theater group in the state, but, according to the Volcano Theater Company (VTC) Website, Volcano also had the first debating society in the state, the first circulating library, the first private law school, and the first astronomical observatory--not to mention a very active baseball team. Facts like these again underscore the astonishing level of activity in this area while gold was being mined. Right now, the VTC (in its 38th season) is performing Agatha Christie's Murder on the Nile, in the town's outdoor amphitheater (through July 9). A rehearsal was going on as we pulled into town. 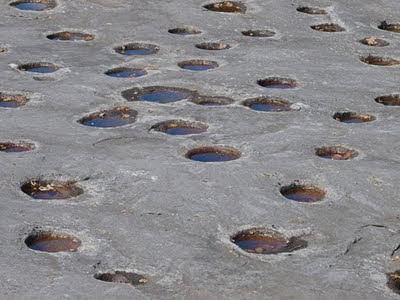 The rest of the trip was wine tasting, with a little bird watching mixed in, but not without detours. At the end of the trip I visited Marshall Gold Discovery State Park (in Coloma, just north of Placerville) which has a good historical museum, a working blacksmith, a monument to James W. Marshall, the man who first found gold in the tailrace (the rear water outlet) of Sutter's Mill (Sutter had partnered with Marshall to build a mill here to supply lumber to Sutter's Fort, in Sacramento), a monument showing the location of the original mill, and a full-sized replica of the mill, which fell into disuse only a couple of years after Sutter and Marshall built it. With the recent rains and snowmelt, the river that powered the mill (the South Fork of the American River) was cold and moving swiftly. I also stopped at Grinding Rock State Historic Park, which has the largest grinding rock in North America at the site of an old Miwok Indian village. The petroglyphs mentioned are much worn and very hard to see, but the large slab of rock peppered with holes used to grind acorns and other seeds into meal is interesting (photo). In the trees around the grinding rock I saw a pretty Bullock's Oriole and a number of flycatchers I had to leave unidentified. 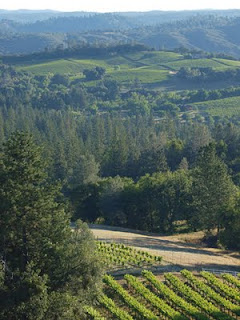 I mostly tasted wine at wineries along Shenandoah Rd., just north of Plymouth, in Amador County, and then along Fair Play Rd., at Fair Play, in El Dorado County, staying the night at Fitzpatrick Winery and Inn, on Fair Play Rd., a log building on a hill with a panoramic view of the surrounding vineyards (photo). I enjoyed the spacious room and especially the excellent complimentary breakfast--I had "green eggs" (eggs with spinach) with smoked salmon on top. Had a good evening meal at the Gold Vine Grill, a few miles down the road. I tasted a decent Syrah at Fitzpatrick, but the standout in the area was Skinner, where I tried a truly delicious Grenache and an excellent, Rousanne-Marsanne-Viognier blend, among others--all good. Cedarville came highly recommended, but was closed.

Along Shenandoah Rd., near Plymouth, in Amador County, I tasted wines at Vino Noceto (which is making some very good high-end Sangiovese wines available only at the winery), at Cooper (generally good across the board, but with a certain sameness, and nothing that really excited me--although the Pinot Grigio was quite solid and the tasting room was very attractive and friendly, certainly worth a visit), and at Karmére (overall, the best wines I tasted in the immediate area)--barely scratching the surface. My wine tasting in Amador and El Dorado Counties turned out to be a short familiarization tour. I'd like to go back to do it more methodically at another opportunity. 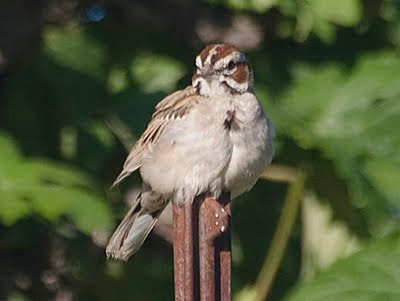 I got up at 6:00AM after the night at Fitzpatrick and took a walk around the vineyards to look for birds. There was quite a lot of activity. There were many Lark Sparrows (photo), several warblers that got away too quickly to identify, an Ash-throated Flycatcher, Lesser Goldfinches, Western Bluebirds, many Acorn Woodpeckers (feasting on a termite nest along with Kingbirds, Flickers, and a couple of Western Scrub-jays), and an odd bunting-like bird that must have been a Lazuli Bunting but too blue and without the usual russet at the breast (colored like an Indigo Bunting, but with a pale breast)--one of those head-scratchers. Taken as a whole, an excellent little trip.
Posted by Colin Talcroft at 11:32 AM 1 comment: