Yesterday I finally got around to bottling our 2015 Cabernet Sauvignon/Cabernet Franc. It was a short job as our 25 vines (21 Cab Sauvignon, four Cab Franc) produced a tiny harvest that yielded only three gallons of finished wine, or 15 bottles. The low yield was in part because of a row of overgrown trees in my neighbor's yard that have increasingly shaded the vines over the years. This spring, I persuaded him to remove them, as he had wanted to anyway. I'm hoping the greatly increased sunshine now will result in both better yields and fewer problems with mildew.

I tasted the wine as I was bottling it. It promises to be very good—perhaps as good or better than the 2014, which has been the best wine from our little vineyard to date.  2016 was a disaster—so little fruit that we made no red wine at all, only 15 bottles of rosé from the combined fruit of the 25 Cab vines and our nine Sangiovese vines. I'm hoping 2017 we'll be the turnaround year.  Below is a finished case of corked wine. Now it's time to design the label for the 2015 wine. 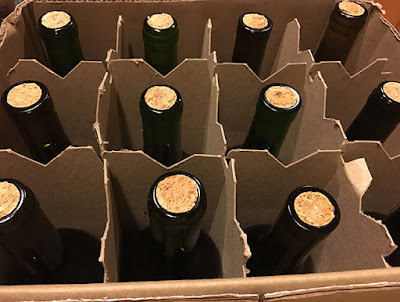 Posted by Colin Talcroft at 6:32 PM No comments:

I'd never heard the opening Stravinsky piece at all, never heard Le Sacre du Printemps live, and Ohlsonn gave a fine performance of the Beethoven concerto, all of which made for an excellent concert experience. The 1795 Beethoven concerto is an interesting transitional piece between the classical and romantic styles. Beethoven's Symphony No. 3 of 1803, is usual considered the composition that ushered in the romantic period, but here in the first piano concerto you can already hear something new. The first cadenza is very, very long, for one thing, and, in both that cadenza and the piece as a whole there are sections that sound like the future Beethoven amidst sections that sound more like Mozart. I don't know if Ohlsson's interpretation made the contrasts more obvious than they sometimes are, but it's something I'd never noticed before.

The highlight of the evening, however, was Le Sacre du Printemps. I own half a dozen recordings and I've heard it on the radio many times, but seeing the piece played live is especially exciting because so much is going on on stage (and it's a very big ensemble—according to the program, scored for: three flutes plus piccolo and alto flute (third flute doubling second piccolo), four oboes and English horn (fourth oboe doubling second English horn), three clarinets plus E flat clarinet and bass clarinet (second clarinet doubling second bass clarinet), four bassoons and contrabassoon (fourth bassoon doubling second contrabassoon), eight horns (seventh and eighth doubling tenor tubas, also known as Wagner tubas), three trombones, two bass tubas, five timpani (divided between two players), bass drum, tam-tam, triangle, tambourine, guiro, ancient symbols, and strings). It's as interesting to watch as it is to listen to. (A guiro is that Latin American percussion instrument made from an open-ended gourd with parallel notches cut in the side). There was barely enough room on stage for all the musicians. I don't think I've ever heard a performance of Le Sacre du Printemps as good as this one. Mälkki kept things taut, precise, and powerful without ever giving in to what I suspect must be a huge temptation to let the tempo pick up as the energy of the music increases. Maintaining the relentless drive but without rushing is probably the key to making the piece a success. Mälkki kept things right on the edge from start to finish. It was electrifying. Goose bumps and giggles. I've never seen a longer, more enthusiastic standing ovation in the many years I've been attending the San Francisco Symphony concerts. It must have lasted a good eight minutes. A memorable performance.

Posted by Colin Talcroft at 5:57 PM No comments: 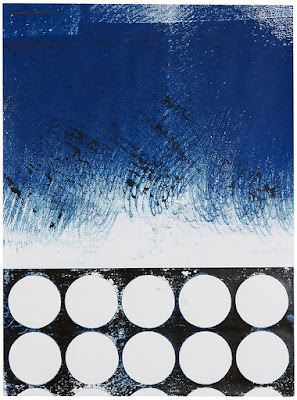 Here is the third of the four collages I made using material I printed at a recent class I co-taught with Suzanne Jacquot at the Marin Museum of Contemporary Art. All four use the pattern of circles as a basic element.

Click on the image for a larger view. For more, visit my collage website at: http://ctalcroft.wix.com/collage-site/
Posted by Colin Talcroft at 4:51 PM No comments: