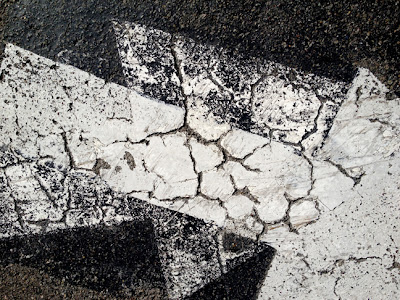 Roadway arrows fascinate me. I don't know why. These two must have seemed confident and assertive when new. Now they are old and worn away, one overlaid with the other, this second one a newer, younger arrow that itself has faded. Looked like art to me.

Art I'm Looking at: The Collages of Yuko Kimura 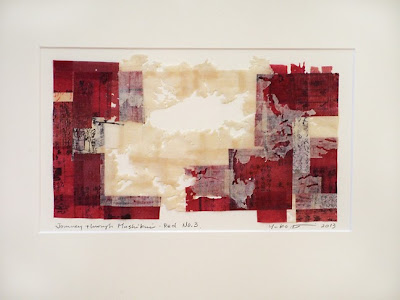 At this year's San Francisco Fine Print Fair (January 18-20, 2013) I came across the work of a young Japanese woman, Yuko Kimura, that impressed me greatly. It would be fair to say that, for me, seeing her work was the highlight of the show.

Ms. Kimura, born in Oakland but raised in Tokyo, now lives and works in Cleveland. She was at the venue, having come with the Verne Gallery, a Cleveland gallery specializing in Japanese prints and paintings that represents her.

She showed recent and older work from a number of different series. Despite this being a print fair, all of her work is collage, although she often overprints collage elements with ink, using various techniques, including etching, aquatint, and lithography. I was particularly taken by her "Journey through Mushikui" series. Mushikui means "worm hole" in Japanese. These small works are collages using sheets from old Japanese books riddled with worm holes. Pictured above is Journey through Mushikui Red No. 3, with the book pages overprinted in a rusty orange-red. I liked these collages for their juxtaposition of simple, straight-edged, geometrical forms (mostly the areas of printed color or negative space created by the printed areas) with the decidedly sinuous, contrastingly non-geometric text and line illustrations on the book pages, joined by the organic, random meanderings of the worm holes. A lot of the other work she showed is done using scraps of indigo-dyed cloth or paper or with areas printed in the color of indigo, evocative of worn, patched traditional Japanese rural garb. Ms. Kimura has a wonderful sense of composition and of color. I look forward to seeing what she comes up with next.
Posted by Colin Talcroft at 6:25 PM No comments:

Books I'm Reading: The Journals of Lewis and Clark 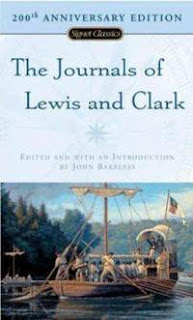 It must have been in 2004, on a trip to Oregon, that I bought my little edition of The Journals of Lewis and Clark. The Lewis and Clark group--the Corps of Discovery, as it was known--left St. Louis for the Pacific Ocean in 1804, and the book I purchased (on the road, at a gas station kiosk, if I remember correctly) is the Signet Classics 200th Anniversary Edition.

It had been sitting on my shelf since that trip. Last week, having finished Winston Churchill's six-volume history of WWII (more than 3,600 pages, not including many hundreds more in the form of appendices) I was looking for something shorter and for something different--and the journals are quite different from Churchill's detailing of the great military conflict of the 20th century, not least because the Journals involve very little killing--except of deer, elk, buffalo, beavers, and dogs, the animals that satisfied the hunger of the 30 or so men that made the long trip across the Western United States. Beaver tail, apparently, is rich in fat and tasty. Some men enjoy the taste of dog, it seems, while others find it vile. A number of weak horses were consumed along the way as well. Berries and roots were an occasional (and not very popular) respite from the meat. The group ate less fish than you might expect from the fact of their journey having mostly followed great river courses.

The expedition left in May 1804 and arrived back in St. Louis more than two years later, in September 1806. One woman was in the group, the famous Sacagawea, a Shoshone woman married to one Toussaint Charbonneau, a French Canadian (in today's terms) trader, from Quebec. Although she is often described as a guide, the journals make clear (and editor John Bakeless points out in a number of places) that she acted mainly as an interpreter for the group, not as a guide; most of the journey was through territory she'd never seen before. She was of critical importance, however, in negotiations for the horses required for the crossing of the Rocky Mountains. Between St. Louis and the mountains and from the lands west of the mountains to the Pacific, most of the trip was made by boat--canoes and pirogues (although sandbars, beaver dams, and rocky rapids often required the men to carry the boats and their supplies), but horses were essential to cross the mountain range.

While the journal entries in this shortened version don't go into a lot of detail, they paint an overall picture of what it was like to travel for months on end, dependent on the land for food and always at risk of a misunderstanding with local Indians that might result in bloodshed. Remarkably, the party was involved in only one such incident in the two years of travel. Encounters with different tribes illuminate the character of each of them, and they appear to have been very different, ranging from the rather quiet and cooperative Mandans interested in trade with white men and the Pacific Coastal tribes that already in 1804 were long used to dealing with white men to one or two tribes with a propensity to larceny and to the proud and belligerent Sioux. In reading about President Jackson's dealings with native Americans I know that white men were in the habit of calling the president The Great Father and of trying to impress upon tribes the need to stay on good terms with the government of the United States, and, for reasons I don't quite understand, many tribes seem to have accepted that extremely condescending attitude. By the time of Jackson's presidency (1829-1837), I suppose it was apparent that the white man was a powerful force and such an attitude makes at least a modicum of sense. I was surprised, however, to read in the journals that already on the Lewis and Clark expedition interactions were often couched in such terms.

The vast distances covered, the open plains, the great herds of elk and buffalo, the rivers that were the highway Lewis and Clark followed across land now occupied by ten states are all impressively drawn.

A good read. Recommended. The Journals themselves, that is. I found this particular edition rather frustrating, however. It's very small, which makes the few map reproductions of little use. I would have liked larger, modern maps in addition to reproductions of the ones created by the explorers themselves, and a great deal more annotation, particularly notes relating places referred to in the Journals to their modern names (often Lewis and Clark use names they make up as they go along or names traders used or they use local tribal names), and a lack of an index seems a fairly major fault. If I had known, I would have looked for a fully annotated edition, which surely exists. This heavily abridged form (382 pages), however, has the advantage of relative brevity, and allows the reader to get a very good taste of the expedition without wading through the full text of the writings of its two leaders.
Posted by Colin Talcroft at 4:40 PM No comments: 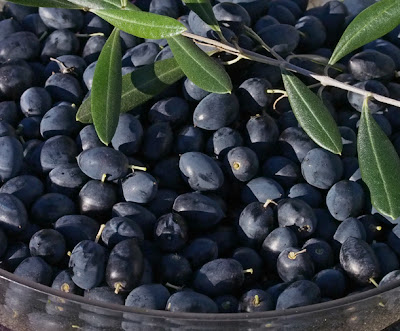 I picked olives from our tree the day before yesterday, hoping to repeat the success I had two years ago making olives for the first time. Last year most olives trees in the area produced virtually no fruit. Olives seem to alternate heavy crops and it rained heavily during flowering last year as well. Picking now was a bit late. The fruit appears more than optimally ripe (a lot has fallen and what was left on the tree was beginning to shrivel a little). On the upside, the olives are somewhat bigger than two years ago, when I picked in mid-January. My neighbor's tree is a much better variety, with bigger, meatier fruits. They allowed me to take what was left on their tree as well.

So, I have about eight quarts or so of two varieties (both unknown) now soaking in brine, using the same solution I used two years ago (a quarter cup of kosher salt to one quart of water). I slit the olives with a knife before brining them, as the recipes instruct. The break in the skin allows the salt to soak in and the bitter components in the olives to leach out. We'll see how it goes.... Meanwhile, my hard cider is still bubbling away on day 11 of fermentation. Testing the liquid, it tastes of alcohol, but is still slightly sweet. I'm guessing it will take another five to six days or so for the fermentation to go to completion. Then I'll need to rack the cider a couple of times to clear it of solids and then bottle it, dosing it with a touch of sugar before putting the caps on, which will cause a secondary fermentation in the bottle, adding that touch of carbonation that makes a good cider refreshing--that's the theory anyway. Cider is a new realm of exploration for me. 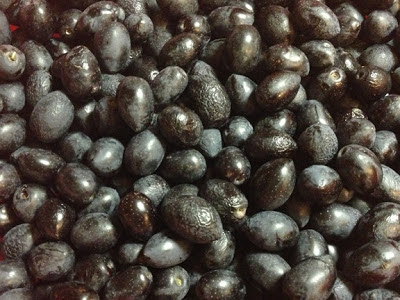 It rained last week, on Thursday (February 7). We got an additional 0.25 inches of rain. That brings our total to 22.45 inches for the 2012-2013 rain year. The historical average for today (February 10) in Santa Rosa is 23.11 inches. So, we are now slightly below normal for the year, having been about 10 inches ahead earlier in the season.

[Update: A heavy downpour on the morning of the 15th added 0.45 inches of new rain, bringing the total for this season to 22.90 inches.]

Posted by Colin Talcroft at 4:43 PM No comments: