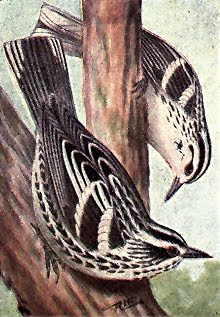 Well, it's that time of year. Migration is under way. In the coming weeks there should be good opportunities to see unusual warblers and other birds passing through our area on the way to warmer climates to the south. One famous spot--famous among local bird watchers, anyway--for finding warblers at this time of year is Owl Canyon (not official; only bird watchers appear to know the place by this name), near Campbell Cove, at Bodega Bay (look for the eucalyptus trees on the right as you head out to the Cove).

For the last couple of days, a black-and-white warbler has been hanging out there. I went to find it yesterday--and succeeded. It was in a scraggly pine at the extreme right of the trees on that side of the entrance to the Canyon (the end away from Campbell Cove, a good 150 yards from the entrance). A very pretty bird. The day before, I saw a Macgillivry's warbler in the Canyon itself, low down and just inside the entrance. Two life birds in two days, bringing my total to 312, with 182 species in Sonoma County. Progress, but 312 is not even 3% of the number of bird species on Earth.

Illustration: Black-and-white warblers from The Bird Book, by Chester A. Reed, 1915 (public domain). 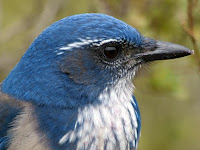 I participated in the autumn bird survey at Spring Lake (in Santa Rosa) yesterday. It was my first extended hike with other bird watchers since returning to the US, a pleasant diversion. The group split into two teams, mine taking the "high road," staying up above the lake. A second group stayed down by the water. I record only what I see myself, which was a large fraction of the group total, but I once again missed seeing a Western Tanager. Western Wood Pewee was a new bird for me, though. 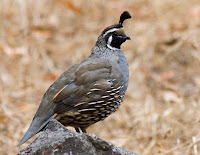 Later in the day, went out to Bodega in the hope of finding interesting migrants. The trip wasn't that productive generally speaking, but I saw a Macgillivray's Warbler for the first time. All in all, a good day for birds--especially as I got quite a few good photographs, some of which are posted here (from top to bottom--Scrub Jay at Bodega Bay, California Quail at spring lake, and Western Sandpipers at Bodega Bay). 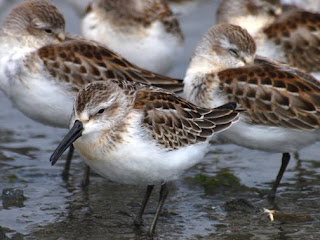 For more information about bird watching in Sonoma County,
see my Website Sonoma County Birding Spots
Posted by Colin Talcroft at 9:13 AM No comments: 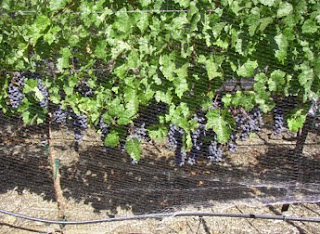 Since arriving back in the US, the weather has been generally cool, but closer to normal than it appears to have been during my absence--with one exception, a two-day hot spell in the third week of August. That sudden heat spike, following weeks of colder-than-normal weather appears to have hit grape growers hard. Many had picked leaves to expose fruit that was behind schedule, in the hope that more air and sun would speed ripening and avoid mold. The grapes were in many cases still not fully colored, and the strong sun and heat ruined many tender berries. Our Cabernet was better protected and so far has fared well, although the sugar levels are well behind those of last year. The Sangiovese had dropped more leaves than the Cabernet because of water stress (I was hoping to go without watering them at all this year, but gave them six hours on the drip following the heat spike), and some of the Sangiovese berries have suffered, but I still expect to get a reasonable yield.

It the past couple of days, I've been testing random berries here and there. The majority of the vines appear to be at around 17 brix at the moment. At this time last year, the Sangiovese was already at 22 brix. If the rule of thumb about sugar and time (one degree brix a week on average) is correct, that suggests we won't be harvesting for another five weeks or so--or in the second week of November! Last year we harvested on September 29. Our latest harvest to date has been October 7, in 2008. We've picked as early as September 3. The later it gets, the greater the risk of rain and therefore mold--and the more chance raccoons and other animals have to steal fruit. This will be a difficult year unless we have a sustained three weeks or so in the mid-eighties. We'll see.
Posted by Colin Talcroft at 5:23 PM No comments:

Books I'm Reading: The Command of the Ocean 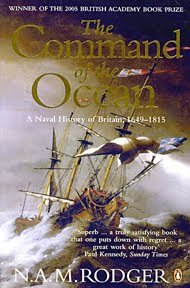 I've finally finished reading N. A. M. Rodger's The Command of the Ocean: A Naval History of Britain, 1649-1815 (Penguin paperback edition, 2006), as thorough and excellent a piece of history writing I've encountered in a long time. I picked up the book at Heathrow Airport nearly two months ago now, on my way to France following a week in England (mostly Cornwall and the southern coast), inspired by a desire to at least somewhat reduce my ignorance of British naval history following a visit the day before to the HMS Victory in dry dock at Portsmouth.

My shelves are peppered with similar book purchases, some of which I have yet to read (I will get to them someday). Looking over at my bookshelves, I can see Stories of Hawaii, by Jack London (Edited by A. Grove Day, Mutual Publishing Co., Honolulu), picked up in a Big Island book store on a visit to Hawaii in 1996. I can see A History of Scotland, by J. D. Mackie (Penguin paperback, 1991), purchased on a trip to Scotland around 1993, along with A Journey to the Western Islands of Scotland and The Journal of a Tour of the Hebrides, by Samuel Johnson and James Boswell (Penguin Classics, 1984), picked up on or just after the same trip. I can see Northwest Wines, by Paul Gregett, Dan McCarthy, and Jeff Prather (Sasquatch Books, Seattle, 1996) acquired on a trip to the Oregon wine country, and The British Columbia Wine Companion, by John Schreiner (Orca Book Publishers, 1996), acquired on one of many skiing trips to Blackcomb, in British Columbia. I see The Journals of Lewis and Clark (Edited by John Bakeless, Signet Classics, 2002), purchased on a road trip into northern California and Oregon years ago. And there was Rubber, Madelon Lulof's 1931 novel about life on the rubber plantations of Sumatra, acquired on a visit to Bali (although I don't seem to have kept my copy). A certain melancholy surrounds my memories of these volumes. In every case, I wish I had read the book before embarking. Travel feeds curiosity--a good thing--but I always feel I should have known more beforehand. 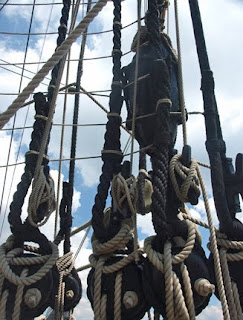 The Command of the Ocean: A Naval History of Britain, 1649-1815 is one of two formidable-looking books on British Naval history by Rodger (this one follows an earlier volume covering the period from 660 to 1649). The book is 907 pages long, but it's not quite as long as that suggests. The main text ends on page 583, followed by a number of appendices (including a chronology, technical data on ships, pay rates, lists of admirals and officials, and financial data), extensive references, a glossary, an impressive bibliography, and a thorough index. There is a section of detailed maps at the start of the book as well. It was exactly what I wanted, providing the background that I would like to have had before visiting HMS Victory. Better late than never.

The writing is clear and concise even in the denser sections on shipbuilding and naval architecture, manning of warships, logistics and victualing, disease, commercial shipping, finance, administration, and politics, and these are covered in detail. Accounts of military operations occupy a comparatively small number of pages, which may be disappointing to anyone looking mainly for bloody battles and heroics, but the reward of this approach is to provide a broad understanding of the technical and political context of the many battles fought during the nearly two centuries the text covers--and these battles, of course, are not neglected. I would have liked a section on sailing technique for the layman, but that's the only thing that seemed remotely "missing" from this book, as a complete understanding of the sketches of operations depend on a greater familiarity with the details of sailing than I (and I suspect many other modern readers) can draw on.

I was particularly impressed by the author's approach to controversial issues. His method is always to step back, give an overview of various opinions and new scholarship, and then to detail reasons for supporting one view or another, or for taking a new view--always giving the impression that he has gathered all the evidence, sifted it, and come to the most correct conclusion possible. A feat of scholarship and a wonderfully entertaining piece of writing at the same time, this is one of those books that you wish would just keep on going. Highly recommended.
Posted by Colin Talcroft at 1:30 PM No comments: