First blooms today on a number of plants in the garden--the first day of what is now expected to be the start of the dry season, considerably later than usual. The good thing about all the rain this year is that most plants have remained lush and green. New leaves are soft, supple, and larger than normal, and flowers have also lasted longer than they usually do. 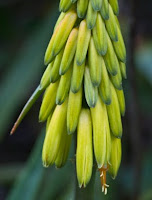 Aloe striatula, bloomed today. The flower stalks look like bunches of bananas, as they always do. These plants can survive the cold here in the winter (sometimes down to as low as about 23 degrees F) while also making it through the (usually) long, dry summers with no supplemental water at all--although they look much better with a little water from time to time. They tend to get leggy, but they are easy to cut back. They will regrow from the roots, and the cuttings can be rooted as well. This flower bloomed on May 19 last year. A year according to Aloe striatula was 381 days. 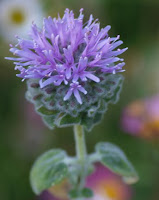 First blooms on Monardella villosa today, also known as "coyote mint," a sturdy, drought-tolerant, although sometimes finicky native that, when happy, is covered with lavender pom-poms. The foliage has a strong scent reminiscent of both mint and grapefruit rind. A favorite of the bees.

First blooms also on the Mexican sage, in the garden (Salvia leucantha)--which is rather bizarre; normally this plant does not bloom until late August or early September. Usually I take it as the first sign of autumn. The rain has tricked this one, I suspect. What is it thinking--that autumn (and our seasonal rains) has arrived early? Who knows? 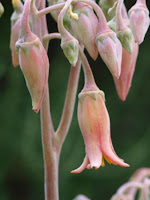 The succulent with the upside down flowers has also bloomed today. As you may have guessed, I can't remember the name of this plant--but I like it. This plant is a favorite also of our Anna's hummingbirds.
Posted by Colin Talcroft at 11:30 PM No comments: 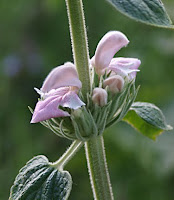 First flowers of 2010 today on the purple-pink Phlomis by the dwarf peach tree. I've forgotten the Latin name of this one, but it stays low (about 18 inches) except when in bloom. The flower stalks shoot up about three feet or more. It looks like a miniature version of Phlomis fruitcosa (Jerusalem sage) but with purple-pink flowers rather than yellow flowers. Drought tolerant and reliable.
Posted by Colin Talcroft at 7:16 PM No comments: 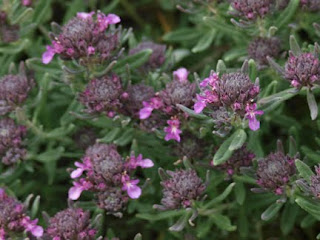 First flowers of 2010 today on Teucrium cossonii, a ground-cover Teucrium with attractive grayish-green foliage. Teucrium cossonii has clusters of small salvia-like, purplish-pink flowers that cover the plant when in full bloom. This plant has been reliable for many years. It takes the summer drought fairly well, but looks best with a little water. This year it looks wonderful because they have had a great deal more rain than usual.

First blooms on Salvia nemorosa on May 29. Another reliable, fairly drought-tolerant plant. The foliage dies back completely in the winter, but always comes back in the spring. Doesn't seem to be picky about soil. A favorite of the the bees.

Gaura lindheimeri started blooming on May 30.
Posted by Colin Talcroft at 6:39 PM No comments: