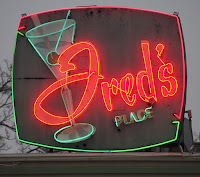 In Palo Alto recently, I drove by this custom neon cocktail glass sign in front of Fred's Place, on Middlefield Rd., technically in Mountain View, according to Google Maps.

For more neon cocktail signs, use the "Cocktail Glass Collection" tab to the right.
Posted by Colin Talcroft at 5:49 PM No comments:

It rained fairly heavily through most of the night last night. This morning I found just over an inch of new rain in the rain gauge. That brings the total for the 2015-2016 rain year at my Northeastern Santa Rosa location to 24.25 inches--and it's still raining. We remain significantly below the historical average in Santa Rosa (28.99 inches for March 10), but we're catching up and every bit helps. Updates to follow, as it's still raining and the forecast is for rain through Sunday--potentially as much as three more inches. Now the threat of flooding looms....

[Update: AS of 3:00PM on March 11, we've had another 1.95 inches of rain. That brings the total to 26.20 inches at my location. This is the closest we've been to normal precipitation in several years. If rain continues as predicted, we may actually catch up.]

Posted by Colin Talcroft at 9:23 AM No comments: 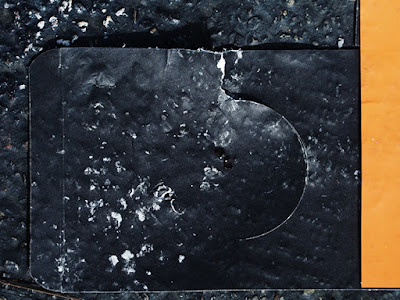 Trash on the street in San Francisco looked like art to me. Serendipitous art, unintended art.

For more unintended art, see my blog Serendipitous Art.
Posted by Colin Talcroft at 9:14 AM No comments: 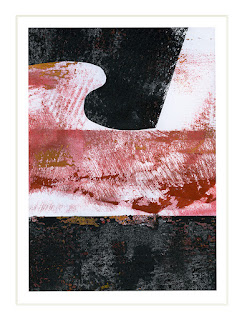 Another new collage—one of a group from the past few weeks using new papers I've made—mostly in yellows, browns, oranges, and pink—although I've made some all-black and all-white sheets as well, these variously tainted with other colors, an effect achieved by deliberately not washing the glass plate they were printed from.

Click on the image for a larger view. For more, use the "Art I'm Making" tab here to the right, or visit my collage website at: http://ctalcroft.wix.com/collage-site/
Posted by Colin Talcroft at 2:06 PM No comments:

Heavy rain throughout the day on March 5 left 2.85 inches of new rain in the rain gauge the following morning--a very welcome addition. That brings the total at my location to 22.00 inches for the 2015-2016 rain year, which runs from October 1, 2015 to September 30, 2016. 28.36 inches is the historical average for March 6, so we are still more than 8 inches below normal, but a little more rain is forecast this week. Despite the deficit, we're better off than last year, I'd think, as it pretty much stopped raining completely last year at the end of January. The rain appears to have been fairly variable from place to place. Last time I checked, the official total for Santa Rosa was slightly higher than the total at my location, while the total reported at the website I look at to get the historical totals reports only 19.88 inches as of today. A variation of 1-2 inches even in an area as small as Santa Rosa is not unusual.

[Update: Drizzle and light rain has continued. By today, the morning of March 9, we've had another 0.50 inches of rain, bringing the total at my location to 23.25 inches.]
Posted by Colin Talcroft at 9:50 AM No comments: