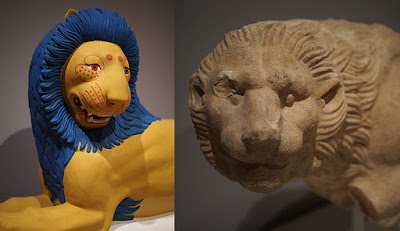 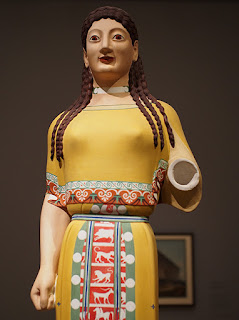 I didn't need convincing that much ancient statuary and sculpture was once polychromed. We are used to seeing such statuary and sculpture stripped of color, but scholars have long been aware that many pieces preserve virtually invisible traces of pigments, and some pieces retain quite a bit of obvious color. Why were so many scrubbed clean (mostly by 19th century archaeologists and collectors)? A symptom of prejudice perhaps, but at least a result of taste, it seems. Some have argued the practice reflects racism--a deliberate attempt by mostly white males to suggest that the gods were "white like us." That seems a bit far-fetched to me, but my incredulity may be mainly a result of the progress in thinking we've made in the last 150 years (I have no such racial insecurities). Maybe scholars really did feel uncomfortable with colored statuary because of racial prejudice. I can't say. In any case, it seems clear that many felt ancient statues were more aesthetically pleasing without adornment, whatever the underlying, subconscious reason for that feeling. 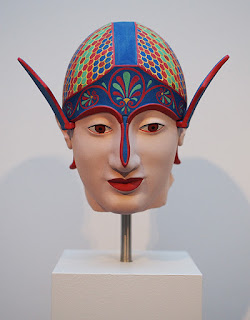 There are parallels. I own six Japanese wooden chests (tansu). Three we brought back from Japan (where I lived for about 19 years), three we purchased here, in California. The three from Japan retain their original finish. The three purchased locally have been stripped of their color. Tansu usually were finished with stain or lacquer and have mostly acquired a patina of accumulated soot and dirt, but Tansu dealers here typically strip the pieces they buy in Japan because they can't sell them locally to an audience that expects them to be "clean." The patina is prized in Japan, despised here.

I think of carpets from the East and Japanese woodblock prints. Both weavers and print designers were delighted by the introduction of garishly bright (although often fugitive) aniline dyes in the 19th century, while taste among Western scholars and collectors of both rugs and Japanese prints has always shunned the brightest colors. 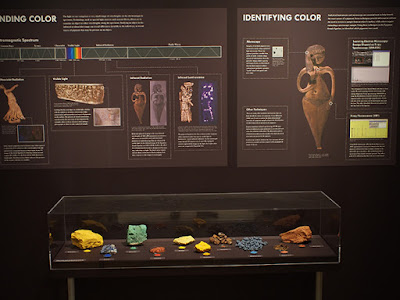 The reproductions in the Legion of Honor show are based on pigment traces and remnants of patterns found on the statuary. Scholars seem to be fairly confident their recreations are close to reality, but freshly painted, they seem garish and cartoon-like. Perhaps they would have quickly weathered into something much more subtle. Straight from the factory, so to speak, they are startlingly bright. I was reminded of my feelings about new tennis shoes in childhood--bright white shoes I'd always try to quickly dirty by hopping into muddy puddles. A small but thought-provoking show. A final display with samples of some of the pigments found on ancient statuary and modern methods of detecting their presence was particularly engaging, I thought. 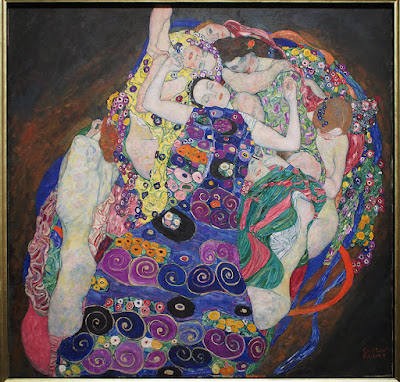 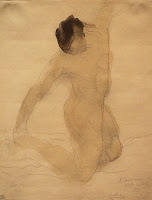 The Klimt/Rodin show is a sensible pairing of the work of contemporaries. The paintings seem right alongside the Rodin sculptures---an impression that contrasts with that created by the incongruous Sarah Lucas sculptures recently shown in some of the same galleries, although the connections between Rodin and Klimt are rather sketchily drawn here. No matter. The show offers an excellent chance to see some important work by Klimt and some rarely displayed drawings by Rodin (I've always thought Rodin's drawings more interesting than his sculpture). Several of the Klimt paintings have never been shown before in the United States. 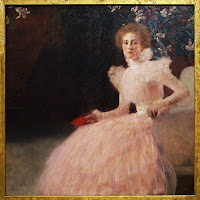 Among the Klimts are several in the style he's best known for--stylized figures surrounded by and wrapped in bold patterning, such as The Virgin (1913) shown above, but included are some earlier works in a more realistic style, notably Portrait of Sonja Krips (1898), and an interesting unfinished Portrait of a Lady (1917) that brought to mind some of the oil sketches on cardboard done by Toulouse-Lautrec. 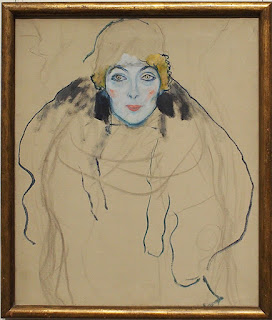 There are a number of large, square landscapes I thought reminiscent of Van Gogh (and one of the labels mentioned that they were painted shortly after Klimt had seen works by Van Gogh). A detail of A Garden In Italy (1913) is shown here. The frames on the paintings, too, are worth a careful look. Many are masterpieces of craftsmanship. 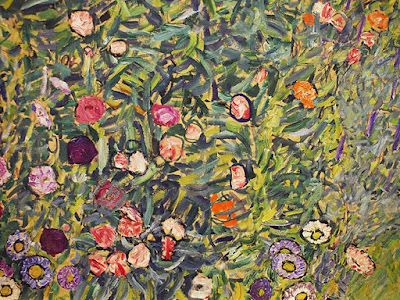 The Diebenkorn exhibition now on at the Crocker Museum in Sacramento subtitled Beginnings: 1942-1955, offers a good opportunity to see early works by Diebenkorn not often on view. The show focuses on the period preceding the artist's shift toward figurative work around 1955, but most of what's on display is from the latter part of this early period; there's little here that could be called juvenilia. The earliest pieces date to the time of Diebenkorn's WWII military service. There are a couple of interesting early sketches of fellow soldiers, for example, but the most compelling works are from the rarely seen cubist-influenced period (roughly 1946-1948), and then from the later Sausalito, Albuquerque, and Urbana periods. Diebenkorn moved to Sausalito in 1947, to Albuquerque in 1950, and later spent a year teaching in Urbana, Illinois, during the 1952-1953 school year, before moving to Berkeley, in 1953, after a very brief stay in New York. 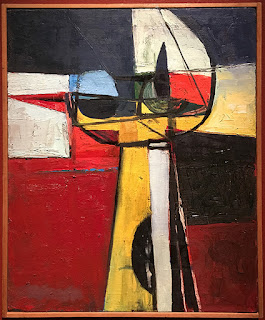 I was familiar with the cubist-influenced work from photographs, but this was the first time I'd seen any of it in person. These paintings rely on bold primary colors and often use heavy, black linear elements to separate areas of color. Untitled (The Magician's Table) of 1947 shown here is typical. I struggle to see the later Diebenkorn in these. They are harder, more grid-like, and less subtle than the later work. Diebenkorn's best work I think derives its strength from a sublime balance between the dyadic and the static, from a generally (although not always) muted palette, and a subtle color sense. In the cubist-influnced works of 1946 to 1948 the artist focused on creating bold effects relying on stark contrasts and largely unmodulated, mostly primary colors. Seeing a grouping of them at once is jarring. 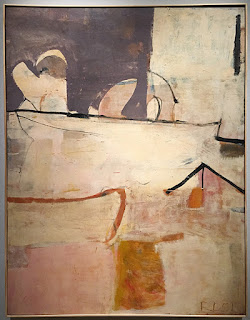 But it was not long before Diebenkorn began to find that balance. He also seems to have found a better technical footing. I noticed that the paint is badly crazed in many of the pieces from the cubist-influenced period but rarely so in pieces done after about 1948. And it is from around 1949 that Diebenkorn begins to look like the Diebenkorn we know from around that year to the figurative work that begins about 1955. The colors are softer, the compositions less grid-like. The linear elements are more nuanced. Areas of color start to have rounder, less defined edges. Paint layers become thinner. Reworked areas are allowed to show their history. In short, the paintings acquire a much expanded visual vocabulary, a more subdued palette, and a more sophisticated one. My favorite piece in the show, Untitled (Alburquerque) of 1951 (catalog raisonné No. 1093) is a perfect example of the change in style. The two paintings shown here couldn't be more different. The difference seems to reflect a complete reinvention of self. Perhaps that shouldn't be surprising. The figurative paintings and then the Ocean Park series of paintings look as different from each other and as different from these two styles as these two look from each other. Diebenkorn was rather good at swinging his rudder and veering off in new directions.

So many of the earlier paintings and drawings are untitled that it would have been helpful to have had each one identified with its number from the catalogue raisonné, but that has not been done. My other complaint would be that many of the large paintings are rather unevenly lighted in the Crocker galleries. But these are quibbles. The show is worthwhile if you're a Diebenkorn fan and haven't seen much work from the early periods. There is a lot here worth looking at and much of it is unlikely to be on view again any time soon. I plan to make a second visit before the show closes in January.

SaveSave
Posted by Colin Talcroft at 4:10 PM No comments: 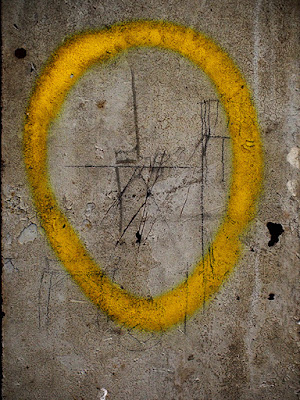 Last week I finally had an opportunity to visit the new arts complex on Minnesota St., in San Francisco. There is a large, two-storey warehouse-like building (1275 Minnesota St.) divided into gallery spaces and a second building that houses offices and a more museum-like space (1150 Minnesota St.). The La mère la mer (the mother the sea) show at the latter, presented by the McEvoy Foundation for the Arts was of interest. To quote the publicity materials:

[The show] "highlights the breadth of the McEvoy Family Collection, from Nion McEvoy and his mother Nan Tucker McEvoy (1919-2015). It features a variety of artists including Richard Diebenkorn, Roe Ethridge, Carsten Höller, Ragnar Kjartansson, Ed Ruscha, and Wayne Thiebaud.

In the main 1275 Minnesota St. building, however, I saw comparatively little that interested me. The exceptions were the works at the Jack Fischer Gallery, where I met Byron Ryono, now showing some small bronze sculptures that I enjoyed for their beautiful surfaces, and the show of works by Seiko Tachibana at Themes+Projects. At the latter, I especially enjoyed looking at three books this gallery has published of work by Hong Kong photographer Fan Ho, an artist I had never heard of before, but a master of light--someone I look forward to learning more about.

As sometimes happens, I liked some of the unintended art I found in the building best--for example, the composition shown here that I found on one of the steel girders supporting the building. Unintended art.

Posted by Colin Talcroft at 7:12 PM No comments: 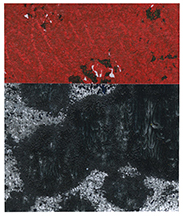 For more of my collage work, visit my website at http://ctalcroft.wixsite.com/collage-site
Posted by Colin Talcroft at 3:23 PM No comments: