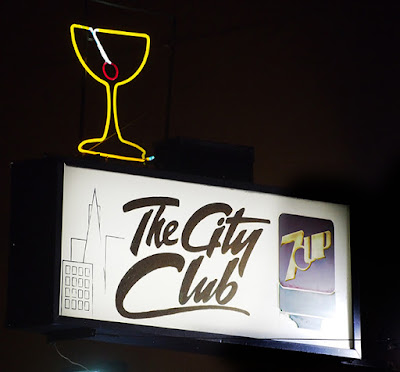 Another neon cocktail glass in San Francisco. This one is at The City Club, 2950 16th Street. The glass itself looks fairly generic in design, but yellow is somewhat unusual.

For more, click the "Cocktail Glass Collection" label at right at the top of the page.
Posted by Colin Talcroft at 8:54 AM No comments: 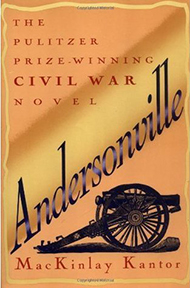 My grandmother always spoke highly of this book. Her interest in it stemmed in part from the fact that an ancestor of ours was captive at the infamous prison depicted in the novel, formally known as Camp Sumter. One Bernhard Kratzsch, an Ohio volunteer, (also known as Rheinhard)--to me, an uncle with many greats before his name, was captured at Gettysburg and ended up at Andersonville. According to my grandmother, he died there. In 2013, on a trip across the southern states (mostly for birding), I visited the site. I was unable to find Bernhard's name among those buried in the cemetery adjacent to the stockade that housed the captives. A guard told me many Union soldiers that had been at Andersonville--thousands of them--were moved south and east as Sherman's army advanced, and that many died en route or at prisons deeper in confederate territory. Our Bernhard was perhaps among those men.

It's a book I've long meant to read. And so I have now. I see that it would have interested my grandmother also because it is beautifully written. Her second husband owned a well-respected independent bookstore in Dayton, Ohio, McLean's Books,  in the days when nearly all bookstores were independent bookstores. She taught high school English for many years in Dayton. She read voraciously. She was an admirer of fine literature.

Andersonville was a shockingly horrible place. Kantor vividly describes the conditions in the camp--a simple rectangular stockade of upended pine trunks filled with tens of thousands of men given no shelter and little food, men with access only to fouled water. Though a novel, Andersonville is based on meticulous research. While characters in the story living outside the prison itself are mostly fictional, many of the guards and officers in charge and even some of the prisoners are based on people who actually lived. Some of the reports on conditions at the prison quoted are taken from contemporary reports. A substantial bibliography is provided. I see no reason to believe the author has done anything but bring to life the horrid place much as it must have been in reality. Although Andersonville was written almost 65 years ago. It remains quite fresh. Highly recommended.
Posted by Colin Talcroft at 9:23 PM No comments: 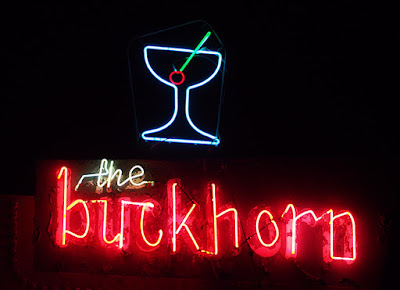 On a recent day of driving around San Francisco after dark I passed this simple but attractive neon cocktail glass (with skewered cherry) at The Buckhorn. Unfortunately, I've lost track of the location. A Google search brings up only the Buckhorn Grill, with three locations in the city, but this appears to be an independent bar not connected with the grill. Somewhere in San Francisco....

[Update: Or so I thought. Oddly, I drove by the place again a few days after posting this. I see that The Buckhorn is in Petaluma, not San Francisco--at 615 Petaluma Blvd S. I'd forgotten where I took the photograph.]

For more, click the "Cocktail Glass Collection" label at right at the top of the page.
SaveSave
Posted by Colin Talcroft at 1:07 PM No comments:

We had a rare thunderstorm today. It very quickly dropped a quarter inch of rain on us. As the official rain year is now calculated from October 1 to September 30 of the following year, this new precipitation, although it feels like the start of the 2017-2018 rain year, will be credited to the preceding year. That brings our already record-breaking total for the 2016-2017 rain year to 55.55 inches at my northeast Santa Rosa location.
Posted by Colin Talcroft at 1:03 PM No comments: 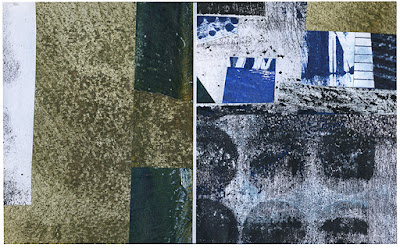 For more of my collage art, visit my website at: http://ctalcroft.wix.com/collage-site/
Posted by Colin Talcroft at 10:15 AM No comments: 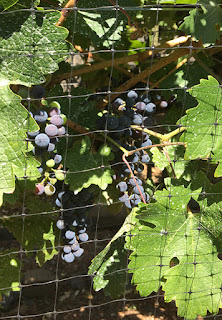 It's almost mid-September. The commercial vineyards, growing many varieties in many locations, are in the middle of a harvest that will last into early November in the higher elevations but mostly finish by mid-October. My Cabernet and Sangiovese vines will be ready soon, but the grapes aren't mature yet. They have been netted against critters. The electric fence is on. So far, no damage from animals, but a fair amount of the Sangiovese got hit by mildew earlier in the season and a lesser amount of the Cabernet. The removal of trees in the neighbor's yard right next to the grapes has helped to keep things healthy otherwise--more sun, more light. As long as the animals continue to leave the berries alone, we'll have a harvest at least as big as the very small harvest of last year. Now I simply wait for the grapes to mature while keeping an eye on their sugar levels. Quite a few raisins already, a result of the very high temperatures (well above 100 degrees) we had last week and the week before. I've watered only twice this year, once a deep watering of 7 hours and more recently, following the heat, about 4 hours. As always, we won't really know what's going on until the berries are picked and crushed. That's probably about two weeks away.
Posted by Colin Talcroft at 9:50 AM No comments: