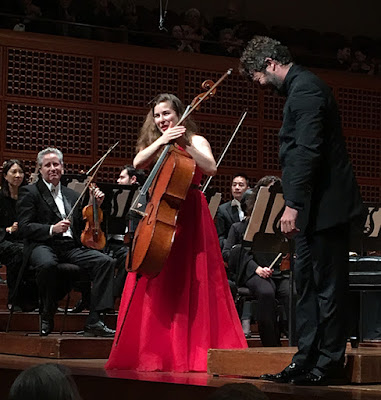 Last night, October 21, 2016 was the opening of the 2016-2017 concert season—for me, at least. I was in San Francisco to hear Pablo Heras-Casado conduct the San Francisco Symphony in Mozart's Symphony No. 29, Schumann's Cello Concerto in A Minor (Alisa Weilerstein soloist), and Dvorak's Symphony No. 7. Each time I've watched Heras-Casado conduct, I've been impressed by his apparent rapport with the San Francisco Symphony musicians. Everything seems crisp, clear, taut, and in its place.

I enjoyed the Mozart performance, which had these qualities in spades, the Schumann less so. The Schumann concerto is from that period in musical history when it was fashionable to leave no pauses between movements; it's always felt wrong to me. There's nothing inherently necessary about dividing music into clearly separated segments, but the breaks allow the listener time to reflect and absorb before being asked to consider a new set of ideas. The Cello Concerto seemed amorphous, without direction, and a little overblown, the lack of pauses contributing. It's not among my favorite cello concertos. Weilerstein, Heras-Casado, and the orchestra seemed very much in tune (pardon the pun), however, and Weilerstein played with the drama she's known for, the drama heightened by her voluminous crimson dress, but I thought the sound of her low string rather ugly—gritty and grippy, as if she had put much too much rosin on her bow. I suppose that's a minority opinion, but I found it distracting.

The highlight of the evening was perhaps the Dvorak. Sitting near the front is a compromise. It's fun to be close to the conductor and soloists, but the sound can get a trifle out of balance, with the brass and low strings a little too strong, the violins a little lost, and that was apparent in the Dvorak, particularly when the sound was biggest, with the horns threatening to overwhelm the violins—but that was not the fault of the performers, who were, as usual, in good form. Dvorak is nothing if not colorful. He always uses the full orchestra, giving everyone a lot to do—in this case, the winds, in particular. His Symphony No. 7 is a passionate piece of music. There's plenty of drama (and it's hard work for the conductor; Heras-Casado was dripping with sweat by the end), but Dvorak, even at his most intense, never seems willing to accept the notion of hopelessness. There is always something optimistic about his writing, a positive energy always swirling around at the eye of the storm. All in all, a good start to another season of fine music in San Francisco.
SaveSave
Posted by Colin Talcroft at 11:50 AM No comments: 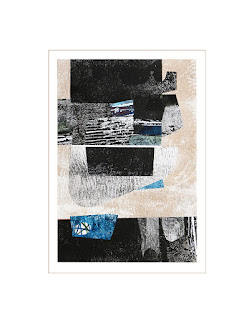 Click on the image for a larger view. For more of my collage work, visit my collage site at http://ctalcroft.wix.com/collage-site.
Posted by Colin Talcroft at 3:54 PM No comments: