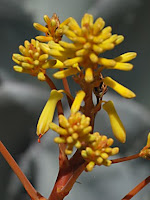 First blooms today on Aloe buhrii and on one of the yarrows in the garden, Achillea millefolium "Moonshine." Aloe buhrii has been among the most successful aloes in the garden, chiefly because it's a native of high altitudes in South Africa and therefore has no problem with the winter cold. It was completely unaffected by the cold winter of 2009-2010 (cold for Santa Rosa; it got down to about 23 degrees). The first flower among many on a strong central spike opened today to reveal the tips of a few stamens. This plant bloomed in 2009 on May 11. A year according to Aloe buhrii was therefore 369 days.

Likewise, "Moonshine" has been the most successful of all the Achillea millefolium varieties I've tried in the garden. Most live a year or two and then disappear. This plant has come back reliably for five years now. It blooms over a long period. The native bees seem to love it (there's one drinking nectar in the photo here). In 2009, this plant bloomed on May 8, for a year of 372 days.

Many yellow flowers, not all as successful as these.
Posted by Colin Talcroft at 5:43 PM No comments:

I recently reviewed the 2007 Château Ballan-Larquette Bordeaux in these pages. Yesterday I found a 2008 Bordeaux Blanc and a 2009 Bordeaux Rosé from the same Château, again at Beverages and More, and decided to give them a try. Tasting notes follow.

2008 Château Ballan-Larquette Bordeaux Blanc--a classic Sauvignon Blanc/Semillon blend. The wine was a very pale straw color with a fresh, yeasty, oaky nose that also had hints of pear blossom and later lemons and perhaps limes as well. Nice, appetizing scent. Clean, dry, and correct on the palate, but very light in body, of only moderate length, and ultimately fairly bland. There were some lingering woody hints on the finish. Good acidity. Not nuanced, but refreshing. Simple, grapey flavors. Crisp, but not distinctive in any way. I would call this the least successful of the three Château Ballan-Larquette wines I tasted. I don't think I'd go out of my way to buy this again. Having said that, this is the kind of wine that is excellent with strongly flavored or spicy Asian foods--Thai, Chinese, Korean, Japanese. On sale for $8.99 a bottle at Beverages and More (regularly $9.99 at that store, about $14.99 elsewhere).


2009 Château Ballan-Larquette Bordeaux Rosé. The best of the three wines in my view. A rosé of classic Bordeaux grapes--Cabernet Sauvignon, Merlot, and Cabernet Franc, it was a very pretty coral pink. Pink wines always look wonderful in a sweating glass. Very attractive nose, but hard to pin down--something floral (but what?), something fruity (raspberries, perhaps?). Later the fruit seemed more suggestive of strawberries. Later, it tasted like strawberries when--and this was rather surprising--tasted along with a good Munster (the stinky soft cheese from Alsace, not Kraft slices). On the palate it was suggestive of honey, but subtly sweet--sweet with fruit, not the sweetness of residual sugar. It was in fact quite dry for a rosé, well balanced with acidity, and taut--not at all cloying. There was a maple-like flavor component--but, again, I don't mean to suggest the sweetness of syrup. Overall, the impression was one of crispness--as it should be in this sort of wine. Longer finish than the white, more body, more flavor, with a good, slightly tannic, slightly bitter finish. Tasty everyday wine for summer quaffing. On sale for $8.99 a bottle at Beverages and More (regularly $9.99 at that store, about $14.99 elsewhere). Recommended at the Beverages and More sale price.
Posted by Colin Talcroft at 6:16 PM 1 comment:

First blooms yesterday, May 11, on the Peruvian verbena in the garden. I love the this tall, sturdy plant (Verbena bonariensis) that puts up with just about anything. It can grow to over six feet tall--taller than me. It's an ideal plant in many ways--it's carefree, doesn't need a lot of water, easy to root from cuttings, self-sowing, and pretty. Peruvian verbena bloomed on April 21 in 2009, considerably earlier than this year. A year according to this plant was thus 386 days. 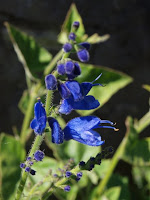 Salvia cacalifolia also bloomed today (May 12). This is a pretty blue salvia that dies back with the frost each year but always makes a strong comeback. This plant bloomed on May 9 in 2009, for a year of 369 days.

Pyracantha also bloomed today, as did Silene dioica, or red campion--although the flowers are more pink than red. I don't have older records for either plant and I can't remember the Pyracantha variety, although I remember that the one in the garden here is unusual--rather different from the type with bright orange berries that is common around town.

Posted by Colin Talcroft at 7:20 PM No comments: 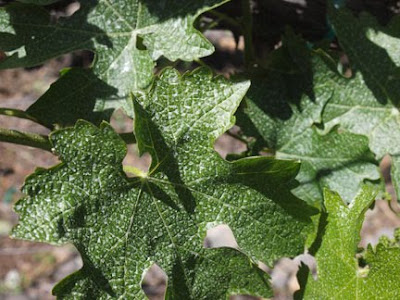 Following heavy rains on May 9 and 10, I had to spray the vines with sulfur again. I used a brand new sprayer with a bigger capacity (3 gallons) than my old one, which allowed me to do the whole vineyard with a single tank--much more efficient. Now, let's hope it doesn't rain again for a while....
Posted by Colin Talcroft at 2:36 PM No comments:

I enjoyed an excellent concert last night in San Francisco at Davies Symphony Hall with Gustavo Dudamel conducting the Los Angeles Philharmonic. The program was a simple one--City Noir, by John Adams, and Mahler's Symphony No. 1--although an extremely appreciative audience also got an encore that I believe to have been the Intermezzo from Act III of Puccini's Manon Lescaut, with some excellent solo passages for cello and viola. (I'm always rooting for the viola players of the world; I love the sound of the viola.)

City Noir was unfamiliar. That's not surprising, I suppose, as it's a new work (its first performance was in early October 2009). It's one of three pieces the composer has written about "the California experience, its landscape, and its culture," according to Adams in the program notes--this piece written in celebration of the city of Los Angeles in the spirit of film noir. It is, in fact, reminiscent of film scores of the 40s and 50s in places, although I wonder how much of that is attributable to the power of suggestion. It's sometimes brash and jazzy, sometimes slinky, sexy, and moody, but nearly always it has an irresistible nervous energy. I enjoyed this very much. I kept imagining black and white street scenes starkly lit, with Robert Mitchum lurking in a dark corner, obscured by a billow of cigarette smoke. The score was notable for a six-man percussion section, two harps, a sizzling alto sax, and some wonderful trombone playing. The entire orchestra was extraordinary, actually--focused, crisp, and astonishingly responsive to the conductor. The sound was excellent, too. I was somewhat off to the left this time (from the perspective of the audience, in seat CC 5). Maybe the dead spot I've experienced at Davies Symphony Hall is mostly in the middle section of what they call "upper orchestra?" Hmmm....an ongoing investigation.

With one reservation, the Mahler was wonderful. I have three recordings of this piece--Solti and the Chicago Symphony on CD (London F35L-50050), Leonard Bernstein and the New York Philharmonic (Columbia Masterworks MS 7069), and Erich Leinsdorf and the Boston Symphony (RCA Victor Red Seal LM-2642), both on LP. The Leinsdorf recording has always been my favorite (in part because of the absolutely beautiful suit Leinsdorf is wearing in the cover photo--OK, that's not the best reason, but that suit is beautiful).

The performance last night was rather different from what I'm used to. Dudamel chose a very slow tempo. I think this worked against Mahler in the first movement. The opening, with its sustained notes, is already quite slow and the music seemed to lack focus as a result of the excessively languorous pace (and a restless audience didn't help). The remaining three movements, however, were highly persuasive. Again the conductor took what seemed to me some rather broad liberties with the tempo--this time not just slow overall, but using rubato liberally--stealing here, giving back there. Dudamel's reading was idiosyncratic, but it worked. He milked the score for every drop of expressiveness. Again the playing was startlingly crisp and together--the members of each section absolutely perfect in their unison--the kind of playing that gives you goosebumps, the kind of playing that can elicit involuntary giggling--unbridled joy. This is live music at its best. Dudamel clearly has something special. It was a privilege to hear the orchestra, despite the somewhat less successful first movement. The audience appeared nearly unanimous in its approval, rewarding the players and their leader with a standing ovation that lasted several minutes.

Fashion Note: Gustavo needs to talk to his tailor--His attire was cut very long in the back, in a way that seemed to accentuate his rather short stature. The opposite effect presumably would be more desirable.

(Photo of Gustavo Dudamel courtesy of the San Francisco Symphony. Photo by Mathias Bothor.)
Posted by Colin Talcroft at 1:40 AM No comments:

Lena Horne died today. She was 92. A great singer, a great fighter.
Posted by Colin Talcroft at 8:03 AM No comments: 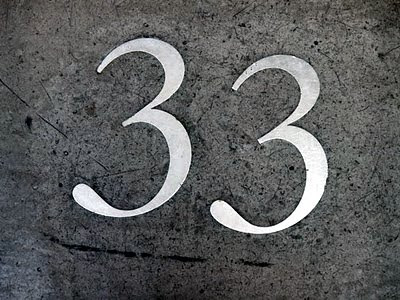 I love the metal numbers embedded in the floor of the San Francisco Ferry Building. Shiny, set against the scratched and marked floor, they are like jewels. Beautiful.
Posted by Colin Talcroft at 7:07 PM No comments:

A violent downpour this morning--just after I had finished thinning the shoots on the Cabernet vines--added yet another 0.60 inches of rain to our 2009-2010 total, which is now 31.45 inches. That's above the historical annual average of 31.01 inches and above the historical average for this day (May 9), which is 30.23 inches--and some Santa Rosa stations have reported considerably more rain than us. So far, the timing has been perfect. It's been mostly unnecessary to water much in the garden. The hills are still green. They had already turned brown and dry in the middle of March last year. 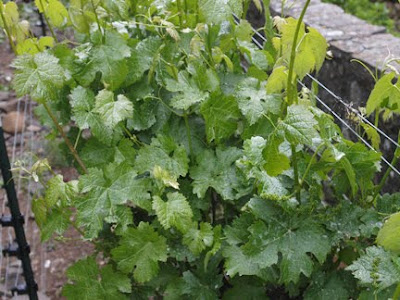 I got up early this morning--well, early for a Sunday--determined to get the shoots thinned on the Cabernet vines, which I did, all before breakfast, even though it took nearly three hours. This reduces the risk of mildew, gives the ripening berries more air and sun, and reduces the amount of fruit on each vine considerably, which makes for easier-to-ripen, more flavorful fruit. I thinned the Sangiovese vines a while back. Everything looks good.

I ended up waiting longer than usual (although I notice I'm not the only one; the vineyards are full of crews right now doing this same work). The wait--primarily because of all the rain this year--may have been a good thing. I'm hoping some of the excess vigor I always have to deal with will have gone to supporting the extra growth. Maybe the vines won't become quite so huge this year. The top photo shows vines before thinning, the bottom photo vines afterwards and some of the carnage on the ground. 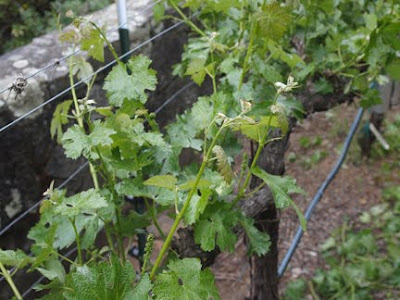 Posted by Colin Talcroft at 11:49 AM No comments: