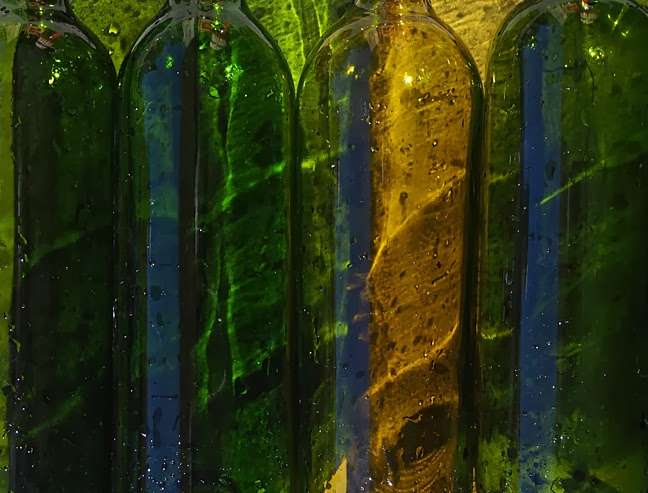 I bottled our 2012 Cabernet Sauvignon/Cabernet Franc today, putting eight gallons of wine into newly washed and sanitized bottles. From the tastes I got while siphoning the wine, it's turned out very nicely. In particular, it's got more ripe fruit flavors than in some past years. I won't be able to truly judge the wine until it's settled down and I can sit down with a bottle over a meal, but I'm hopeful that we've made another good batch. Now it's time to design a label for this wine, but also for our 2013 rosé (from Sangiovese), as well as the hard cider we bottled on December 23 last year. I need to hurry. The cider is quickly disappearing. 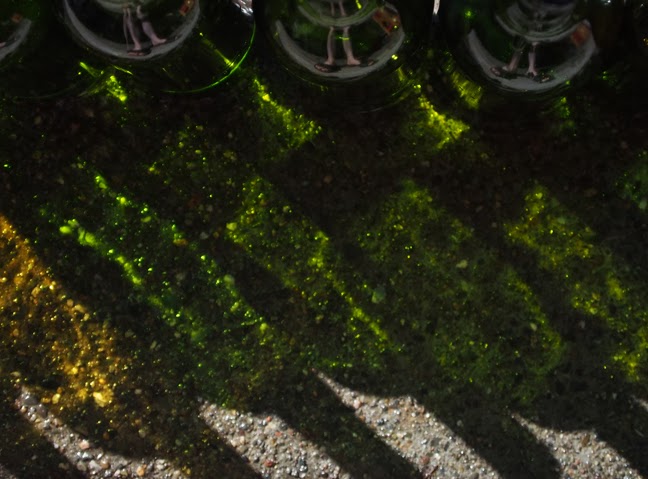 Posted by Colin Talcroft at 9:10 PM No comments: 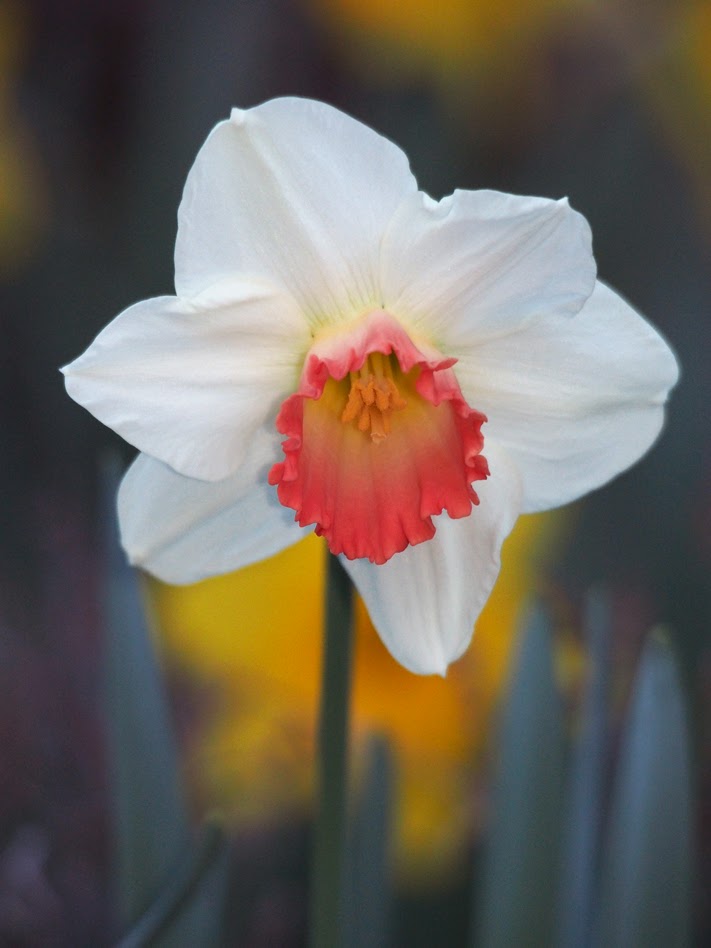 First blooms in 2014 on the two-toned daffodils in the front garden on February 18. The golden current (Ribes aureum) in the back garden began blooming on February 17. 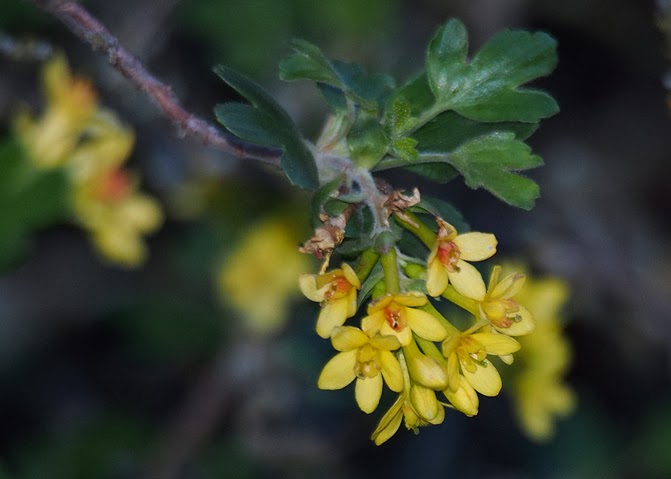 Posted by Colin Talcroft at 7:13 PM No comments: 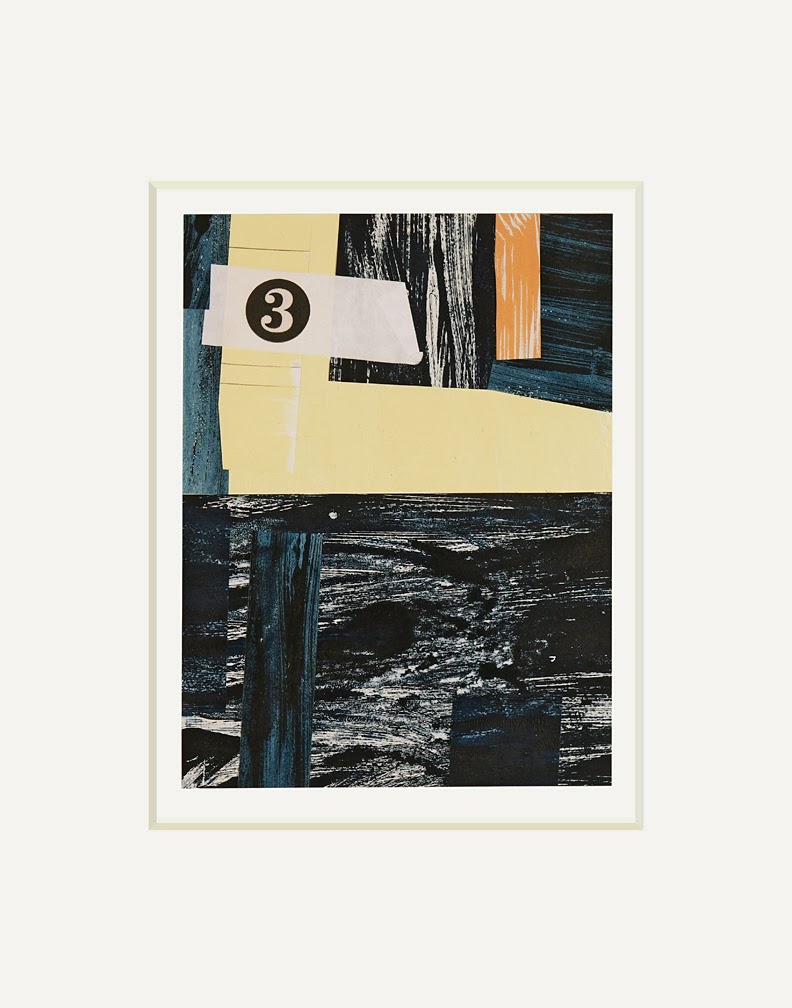 I finished another new collage recently. This one is something of a departure for me because it includes a found object--a numeral three printed on a slip of white paper. It was the wrapper around a bundle of silverware at one of downtown Santa Rosa's brew pubs (The Third St. Ale Works). Normally I don't use found objects because I don't trust them. They tend to fade or yellow, but this one seemed relative safe. It's printed on plain paper in a single color--black--and black tends to hold up. Otherwise, I've again used paper painted with acrylic paints, along with mono-printed elements made with acrylics on paper as the raw materials for the composition, although this one also includes a couple of lines in graphite as well. In the photo here, the lower section looks black, perhaps, but it's actually a deep indigo. Only the numeral is black.

For more, use the Art I'm Making label at right.
Posted by Colin Talcroft at 6:02 PM No comments: 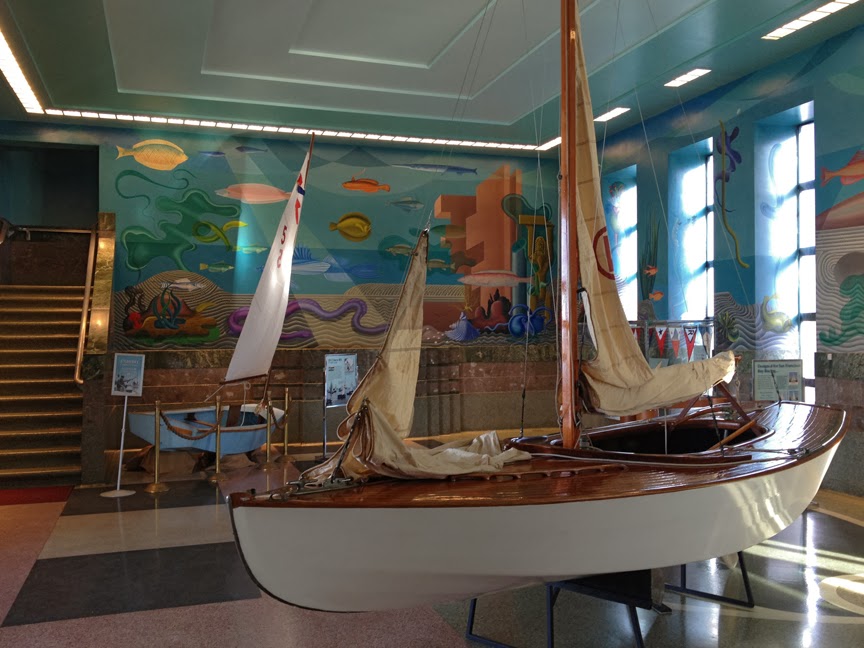 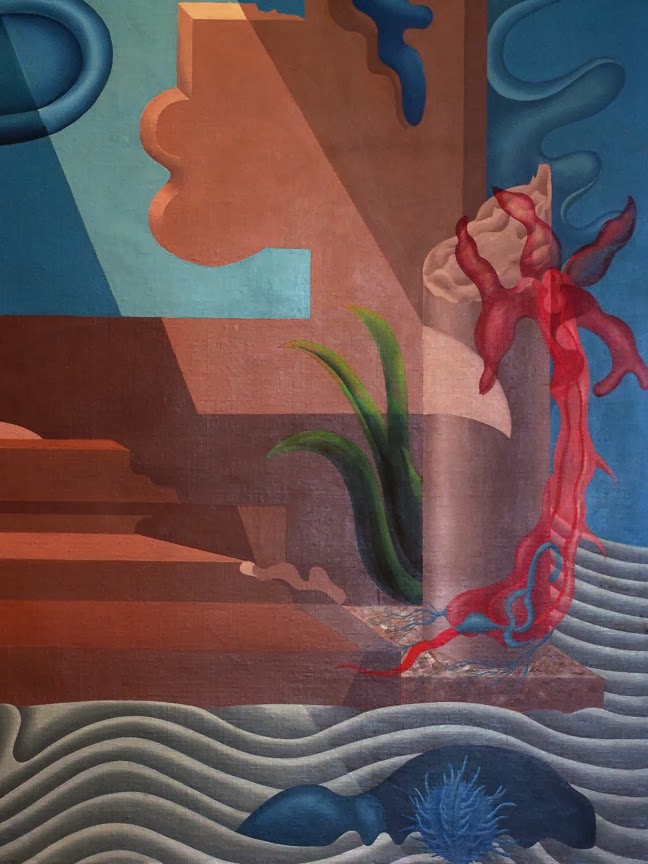 I made a brief stop at San Francisco's Maritime Museum recently, where Polk St. meets the Bay, in the city's Aquatic Park Historic District, part of the San Francisco Maritime National Historical Park, which includes the park area, the Maritime Museum, a visitor's center in the Argonaut Hotel building, a library and research facility, and a number of historic ships moored nearby. It had been years since I'd been to the museum, which I remembered mostly for some extraordinary ship models long housed there. I arrived only about 20 minutes before closing, having been in the area on other business, but it was enough time to get a taste of the rather startlingly beautiful murals on the interior walls of the museum building, designed by William Mooser Jr. and William Mooser III, and originally built as a bathhouse in the Art Deco style. The bathhouse and its museum were shut down for several years for renovation, but the building appears to have re-opened recently. The murals have been cleaned. They glow with color. 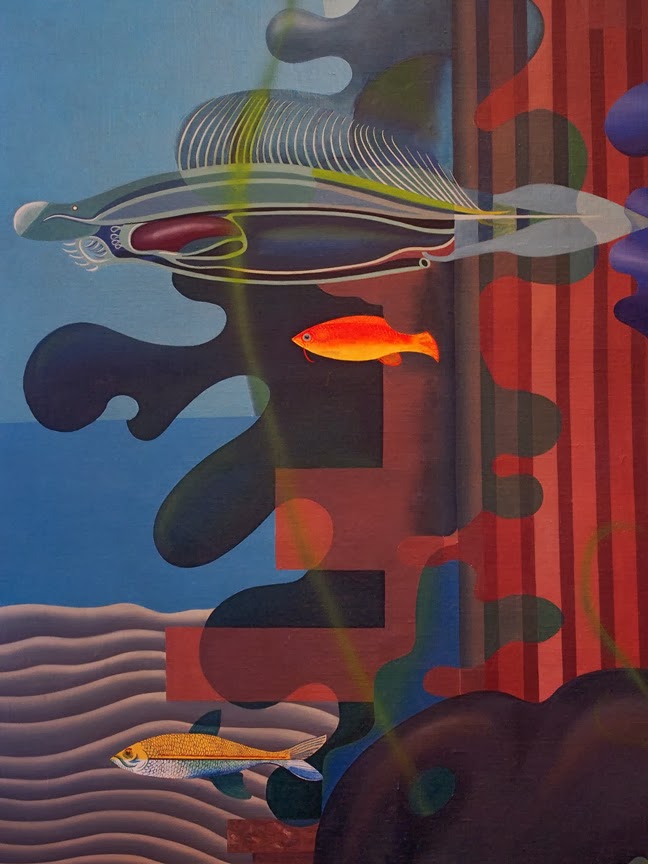 The bathhouse was begun in 1936 and completed in 1939. The fanciful aquatic murals inside are by Hilaire Hiler (1898-1966), known as an artist, but also as a psychologist, a color theorist, and a jazz musician. He was an author as well. His 1942 book Color Harmony and Pigments cast problems of color in art in psychological terms rather than in terms of physics and the physiology of perception. He lived in Paris before WWII and again in his later years. He died there in 1966.

The decorations, the bathhouse, and the park were WPA projects. I can't imagine how I missed the murals in the past, but they appear to have been covered with a layer of grime and the old displays in the museum obscured them. 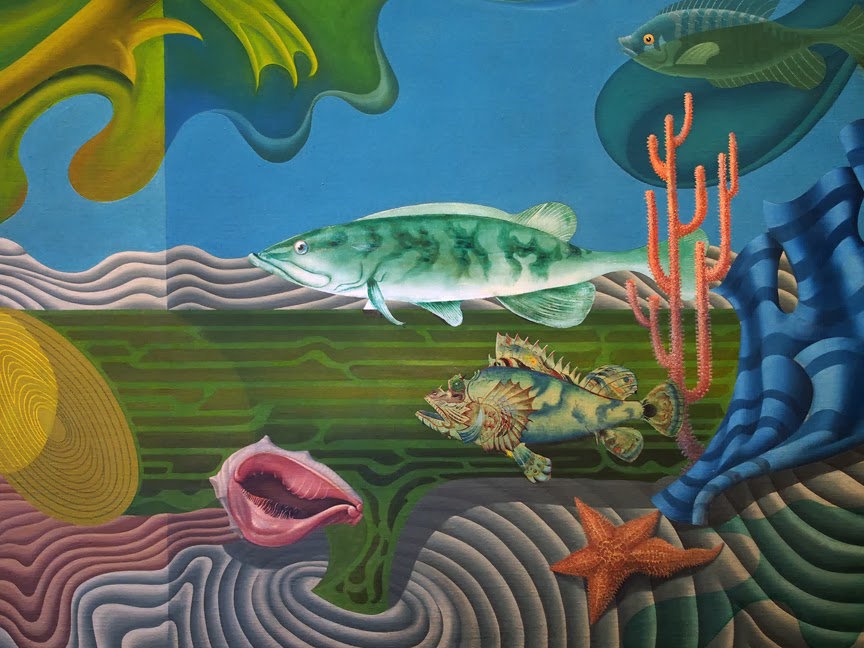 Today it's possible to enjoy their bright colors and flowing lines again. I spent my short time in the main room photographing details. There is a picture everywhere you look. It's projects like this one that I think of when I hear people complain about too much government, about excessive government spending, about government intruding into spheres of activity best left to private enterprise. The WPA put people to work who needed work, and many of the WPA's projects created art of enduring beauty, facilities of lasting appeal. Generations of San Franciscans and visitors to the city have enjoyed the park and the museum for nearly 80 years now. Although the museum building itself appears to have had something of a checkered history (having been used as a casino and an army facility, among other things), ultimately it has proved a worthwhile spending of taxpayer money. I, for one, am delighted it's there. Seeing the murals was thrilling. Some forms of government intrusion, if this is intrusion, seem greatly to be celebrated. 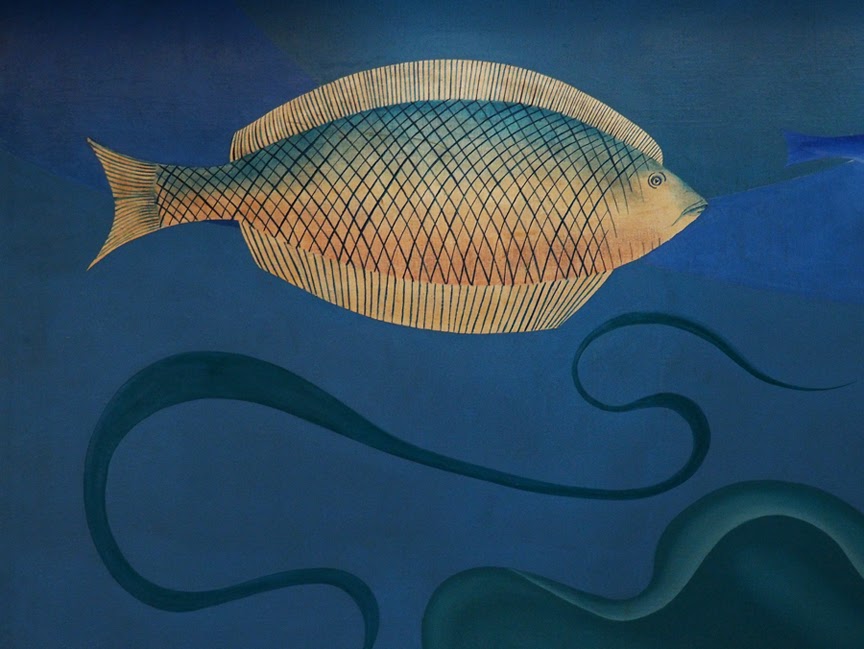 I hope to make another visit soon to explore the rest of the building. Hiler's "Prismatarium," a color wheel illustrating his color theories and conceived of on the pattern of a planetarium, is on the ceiling of one of the other rooms in the building. In its coherent design and decorations, there is something about the bathhouse that put me in mind of Gaudi's Casa Batllo, in Barcelona. There's much to be seen in the rest of the museum, on the historic ships, and in the visitor's center, but it was worth the trip just to get a brief view of the murals before closing. 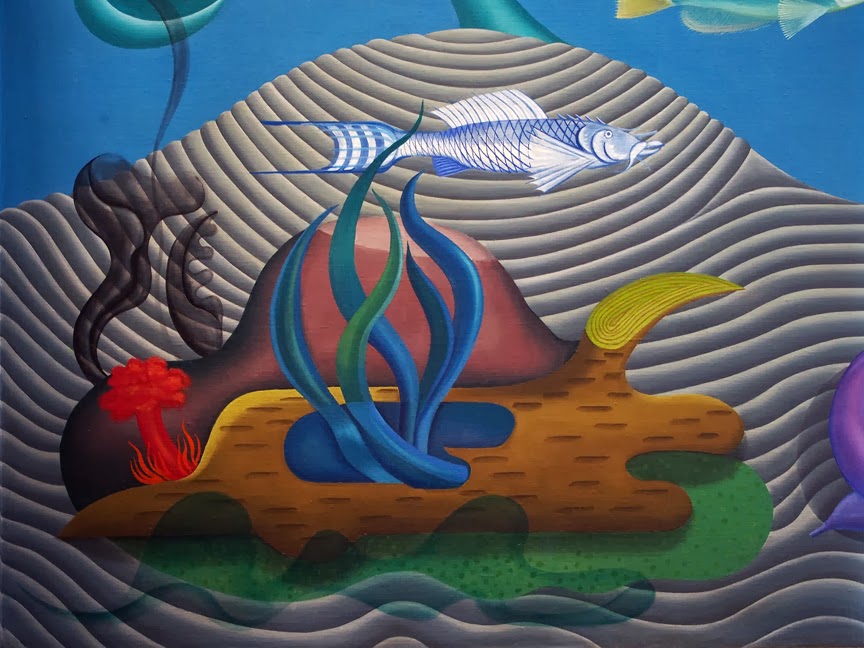 Posted by Colin Talcroft at 7:37 PM No comments: