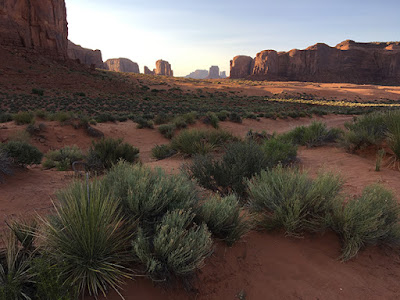 Monument Valley is visible from many miles away. It takes a surprisingly long time to reach the valley after the famous rocks begin to appear on the horizon. A large visitor center overlooks the most famous of the formations, formations familiar to anyone who has seen a few classic westerns. Guide companies hang out near the visitor's center. Bernard, my guide, was a big Navajo man who at first seemed taciturn but turned out to be a good talker with a sense of humor. There's a road through the valley that allows a self-guided tour, but traveling with a guide gives you access to the back roads. Bernard showed me some of his favorite back country views, a natural bandshell in which he played flute and drum, and a wall with petroglyphs left by occupants that pre-date the Navajo, who began to occupy the valley around 800 years ago. The petroglyphs, obliquely lit by bright sun, were almost invisible until Bernard raised an arm against the stone walls to create a shadow. 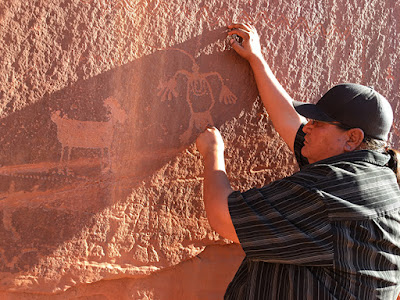 The natural amphitheater mentioned above is a consequence of the sandstone's tendency to form domed shapes that erode away to leave behind concave spaces, these eventually turning into arches if erosion occurs on both sides of the dome. In some places there were large curved chunks of fallen rock that looked remarkably like giant reddish-brown seashells. 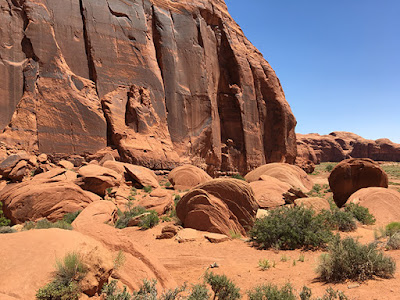 I ended up staying overnight in the valley, sleeping on the dirt floor of a traditional Navajo hogan, a round yurt-like dwelling built of cedar logs chinked with bark and sealed with mud. The stars were beautiful despite a bright, nearly full moon that gave the monuments an eery quality after dark. 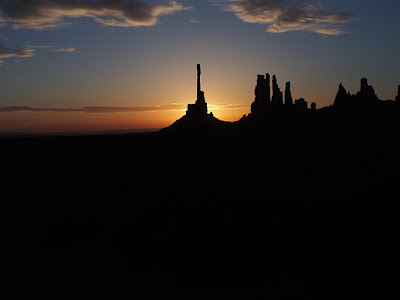 The next morning, I got up early to watch the sun rise behind the spire known as "The Totem Pole," although that seems incongruous, as the Navajo don't make totem poles. The Totem Pole stands alone next to a cluster of similar tall, thin rocks that Bernard referred to as yei' bi' che, which appears to be the Navajo word for the deities the Hopi and others call kachinas. The sunrise behind these rocks has been photographed so often that it's become a cliché. It's used on the cover of the AAA guide to the region I picked up before leaving, for example, but it's an impressive view nevertheless.
Posted by Colin Talcroft at 11:56 AM No comments: 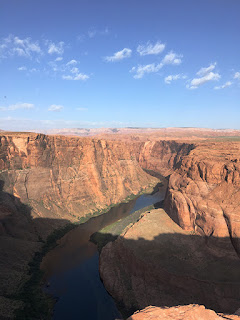 The road out of Grand Canyon north to Page skirts the Little Colorado River Gorge, which cuts through a plateau dotted with green sage bushes and Mormon tea. I noticed the people here never seem to say "the Grand Canyon" but only "Grand Canyon." I wonder why.

I spent the entirety of May 22 in the vicinity of Page, Arizona, making an early visit to the overlook at Horseshoe Bend, a dramatic curve cut through sandstone by the Colorado River just outside Page. A short walk takes you from the parking lot to a ragged outcropping of tawny rock that gives a view of the river channel several hundred feet below. A local resident told me three to five people fall to their death from the unprotected overlook each year, mostly trying to take pictures of themselves too close to the edge. As I was leaving, a bus load of elderly Japanese sightseers arrived for a look, crouching far too close to the edge for my comfort. It was hard to watch. The view is impressive, though. 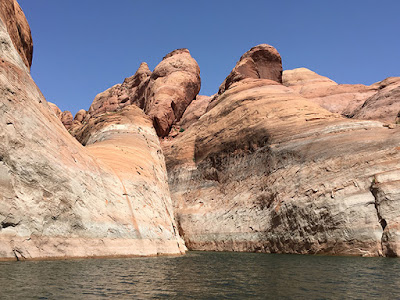 I then headed out for a day on Lake Powell, motoring into Padre Bay, which gives panoramic views of the lake and the dramatic rock formations, once canyon walls, that form its perimeter. The lake, like Lake Mead to the west, is artificial, created by the Glen Canyon Dam, built between 1957 and 1963, which blocks the flow of the Colorado River here. The lake is about 180 miles long and is said to have more shoreline than the US West Coast. Before the dam was built, the now-filled canyon must have looked much like Grand Canyon.

Eventually I arrived at Rainbow Bridge, about two hours north of the marina near Horseshoe Bend that was my starting point. From the landing near the bridge it's a mile walk into a side canyon before the arch appears. This is sacred ground to the Navajo who, according to my guide, view natural arches as gives from the gods, gifts useful for crossing streams, fleeing flash floods, and escaping from enemies. 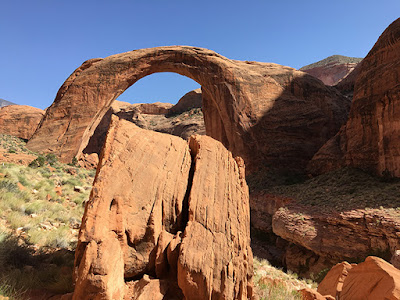 The stone that forms Rainbow Bridge is part of the redder formation known as the Navajo sandstone. The same rock is visible in parts of Grand Canyon, in Monument Valley, which straddles the Arizona/Utah border, and in Arches National Park, further into Southern Utah.

Something of a rock hound as a child, I know a thing or two about how rocks fracture. Obsidian perhaps has the most obvious conchoidal fracture among rocks that most people know, but the Navajo Sandstone, too, fractures in a way that leaves behind concentric curves. Many of the formations have a rounded quality. Natural arches form when the inner portion of a conchoidal fracture face erodes away more quickly than the rock above it. But the geology here is complex. There are many different layers of stone, including natural conglomerates, sandstones, and limestones. Some surfaces are pale, others redder, reflecting different amounts of iron oxide present. Some are smooth, some rough. Others are fractured and eroded into what look like rows of stacked pillows. Some are reminiscent of Chinese landscape paintings in ink, others of Egyptian statuary carved into the rocks. In several places I was reminded of photos I've seen of Egyptian sites near the lake created by the Aswan High Dam. 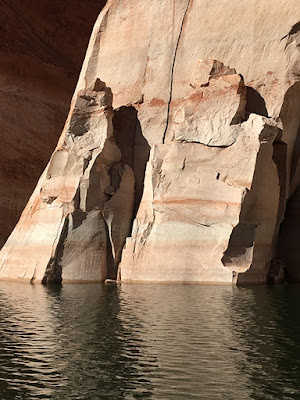 Posted by Colin Talcroft at 7:26 PM No comments: