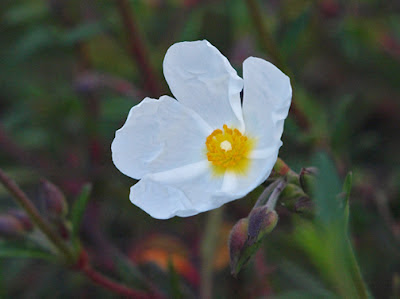 First blooms of 2012 yesterday on Halimiocistus sahucii, a low-growing relative of the rock roses. This one looks a lot like Cistus salvifolius, or salvia-leafed rock rose. It stays a little lower, however, its leaves are more delicate and a darker green, and the flower is smaller and a less creamy white. This flower bloomed on March 18 in 2010 and on April 6 in 2011,
Posted by Colin Talcroft at 11:19 AM No comments:

"Denotation." "Connotation." These are among the English words that I distinctly remember learning. There are comparatively few; I mostly remember grasping new words in foreign languages I've studied, where conscious effort is involved, but I can recall the moment I first heard those two English words.

The connotations of the word "coincidence" seem particularly rich. We appear incapable of accepting the word's baldest meaning. A coincidence always seems to portend something. A coincidence is a palimpsest. We write our own meanings onto the pale face of coincidence instinctively, virtually without thought. I try to resist the urge. To give in to it seems like intellectual laziness. 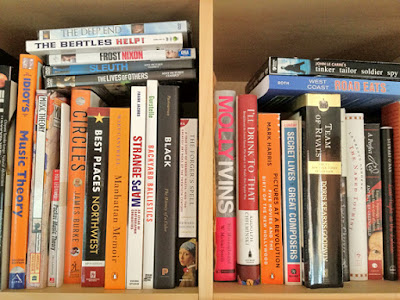 A recent coincidence suggested to me another kind of intellectual laziness and it set me to thinking, and ultimately to writing this little essay--although "essay" is far too important a word for it. My father, a rather distant man, died in February. He had an extensive library. When it became clear that my brother and I would be the ones to go through his books and dispose of the unwanted ones, I saw it as an opportunity to learn something about my father. I jumped to the conclusion that his books would tell me something meaningful, not really thinking. Intellectual laziness.

Last week, ahead of a concert my son was to play in (one of the Gerald Finzi Bagatelles for Clarinet) he had a rehearsal at the house of his accompanist. I would have taken a walk around her Oakmont neighborhood while waiting for him to finish his practicing, looking at the well-kept gardens, the wildly contorted oaks, the subtly colored pebbles embedded in the pavements, but it was raining--hailing, in fact. The accompanist invited me into the house. I sat on a sofa. She handed me a couple of issues of The New Yorker to pass the time. Much as I love The New Yorker, I don't subscribe--I'd never be able to keep up. I don't see the magazine often enough.  In the issue she handed me (November 7, 2011) I found an essay--yes, an essay--by James Wood called "Shelf Life: Packing up my Father-in-Law's Library." Coincidence. Here was another man thinking about the same things I was thinking about.

Wood comes to the conclusion in his essay that it's natural but perhaps wrong to think that a man's library tells us much about the man. I haven't decided whether he's right or wrong. But perhaps what he says doesn't apply here. There are more than just books in my father's library. He was an obsessive note-writer: Nearly every volume has in it a slip of paper or two--sometimes many more--lists, comments, questions, reminders jotted down. Surely this collection of paper--bound and unbound--means something?
Posted by Colin Talcroft at 10:58 AM No comments: 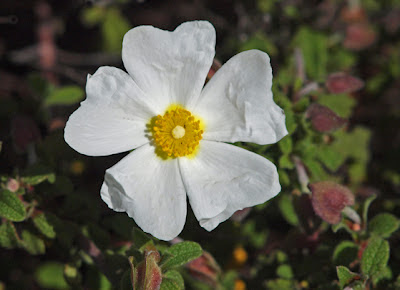 First blooms of 2012 on the low-growing rock rose, Cistus salvifolius, appeared on April 14. A single flower opened a few days before that, but the real blooming began on the 14th. When in full bloom, the foliage is almost entirely obscured by the white flowers that cover the plant. The apple tree and the Ray Hartman Ceanothus are now in full bloom, and the wisteria flowers are beginning to fill out. A very pretty time of the year. Cistus salvifolius bloomed on March 14 in 2010 and April 2 in 2009. Can't seem to find a record for 2011.

Posted by Colin Talcroft at 11:56 PM No comments: 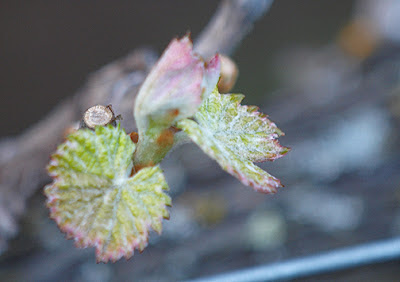 Busy with work, I'm tardy in reporting the first leaves on the Cabernet Sauvignon and Cabernet Franc vines in the back garden. They are just appearing now. The first leaves opened on April 12. It will soon be time to decide what to do about the nets this year. They need repair or replacement. The chore of spraying the new growth with sulfur to prevent mold will also begin soon. 2012 will be our ninth vintage.
Posted by Colin Talcroft at 8:13 AM No comments: 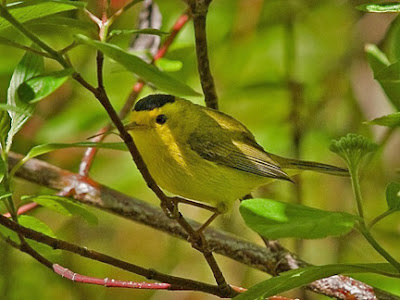 I'm still stuck in the house working on a big translation project, but I popped out for about an hour yesterday to stretch my legs. I took a brisk walk around Spring Lake. There were a few signs of the changing seasons. I heard the first Black-headed Grosbeaks of the season and saw my first Wilson's Warbler of the season (pictured) and heard several more. I'm looking forward to my next opportunity to get out without having to rush back to the computer and keyboard to slog through more text.

For more information about bird watching in Sonoma County, see my Website Sonoma County Bird Watching Spots.
Posted by Colin Talcroft at 8:07 AM No comments: