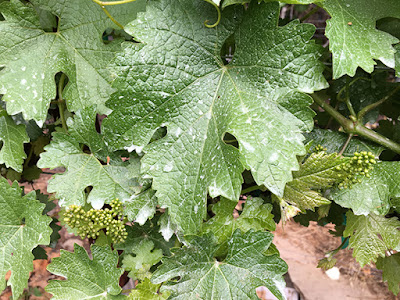 Spraying the grapes with sulfur, to prevent mildew, is a game of tag with the rain, and it always requires judgement when the vines start to bloom—as they have already. The Sangiovese buds have opened, the Cabernet Franc vines are just beginning to bloom and the Cabernet Sauvignon buds  will soon be open too. We've probably had our last rain and I wanted to get them protected before full bloom, so I sprayed them yesterday. I had sprayed once before this year, about two weeks ago, but most of that got washed away by rain. I hope yesterday's spraying will hold them for a while, although I'll probably have to spray once more, just after bloom is over, in a couple of weeks.
Posted by Colin Talcroft at 12:50 PM No comments: 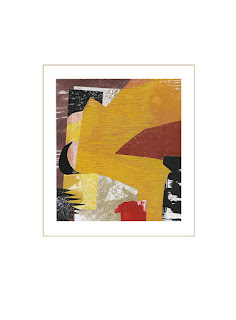 Another new collage. This one is made using scraps of older papers (papers I monoprinted or painted quite a while ago), mostly in warm tones.

Click on the image for a larger view. For more of my collage work, use the Art I'm Making tab here, or visit my collage site at http://ctalcroft.wix.com/collage-site.
Posted by Colin Talcroft at 7:36 PM No comments:

Even if El Niño wasn't as spectacular as some had hoped, we've had more rain than last year, and, importantly, more rain much later in the season. Last year, the rain stopped in January. Last night we got 0.4 inches of new rain, which, while not a lot, is not insignificant either. That brings our total at my northern Santa Rosa location to 30.80 inches for the 2015-2016 rain year (October 1, 2015 to September 30, 2016). We're unlikely to get much more, as the rains usually stop about now even in a good year, but we're already way ahead of the last couple of years. The overall deficit remains, however, as average annual rainfall in Santa Rosa historically has been around 36 inches.
Posted by Colin Talcroft at 10:18 AM No comments: