Art I'm Looking At: Exhibit Pipeline on The Art Wall at Shige Sushi

First up will be Bob Nugent: Dialogues with Nature, a show of works by Bob Nugent, inspired by the time he spends in the Amazon River Basin in Brazil. Bob's work will be on the walls from July 5 through September 3, 2017. The opening reception will be July 10, 2017 from 5:30 to 7:30.

The September–October 2017 slot will go to Graton-based artist Claude Smith.  Claude was a participant in the very first show on The Art Wall at Shige Sushi, in December 2014. Claude is primarily a painter, but he also does mixed media and collage work.

The November–December show will feature the work of Susan Stover, known for small, wall-mounted sculptural objects and abstract mixed-media pieces and encaustics.

The first show of 2018 will be devoted to work by Oakland-based printmaker Linda Yoshizawa who does intricate stencil-based prints and solar plate etchings of mostly botanical subjects.

The February–March slot will go to Katie McCann, also an Oakland-based artist known for her wonderfully imaginative collages.

Posted by Colin Talcroft at 1:27 PM No comments: 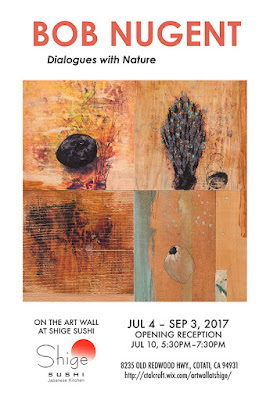 I'm very pleased to announce the upcoming show on The Art Wall at Shige Sushi. We'll be showing works inspired by the Amazon River Basin by Bob Nugent. Nugent's work has been shown around the world (over 100 solo shows and inclusion in more than 550 group exhibitions across the US, in Europe, Asia, and South America.) Don't miss this opportunity to see a selection of Nugent's subtle, evocative paintings. The show runs from July 5 through September 3, 2017

Bob Nugent appears on The Art Wall at Shige Sushi courtesy of Erickson Fine Art Gallery, Healdsburg.
Posted by Colin Talcroft at 10:45 AM No comments: 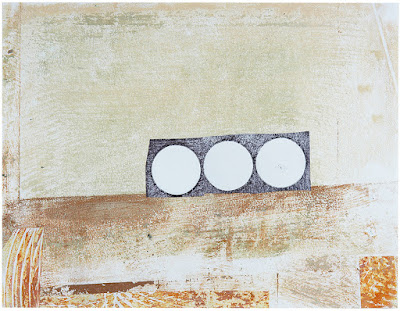 Finally getting around to posting the last of the four collages I made while co-teaching a class with Suzanne Jacquot at the Marin Museum of Contemporary Art back in April.

Click on the image for a larger view. For more, visit my collage website at: http://ctalcroft.wix.com/collage-site/
Posted by Colin Talcroft at 9:24 AM No comments: