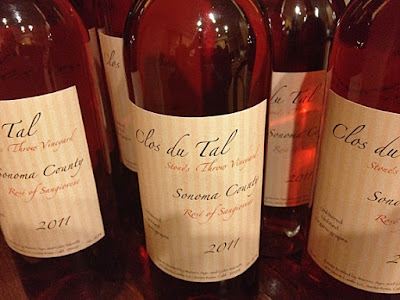 I finally finished designing a label for the 2011 Sangiovese. I got it printed yesterday, and found a few minutes today to paste the labels on the bottles. We made only 15 bottles this past year, so it wasn't a big project, but it feels good to have it done and out of the way.
Posted by Colin Talcroft at 8:42 PM No comments:

Last night I had the pleasure of hearing one of the best concerts I've heard in years. Guest conductor Charles Dutoit led the San Francisco Symphony in the first of three concerts featuring soloist Arabella Steinbacher playing the Tchaikovsky Violin Concerto. Also on the program were Stravinsky's Le Chant du Rossignol and Bartok's Concerto for Orchestra. The program will be repeated tonight, Friday March 2 and again on Saturday, March 3. 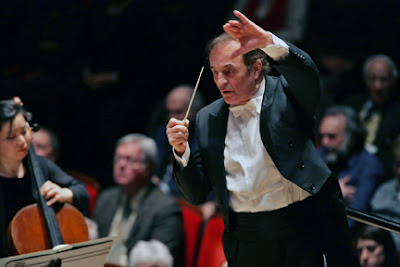 The concert opened with a clean, crisp rendition of Le Chant du Rossignol. The performers and the conductor seemed wonderfully connected from the outset. Dutoit conveyed his thoughts with the subtlest of movements--sometimes just by changing his position on the podium, sometimes with an arched eyebrow or with a smile and a nod. A fourth-row seat made it easy to see him work.

After intermission, I switched to an empty seat at the back of the first floor, thinking it would be more interesting to hear and see the Bartok with a full view of the players. The more distant seat made it easy to watch themes as they moved from section to section--and the sound is more balanced from such a seat. I thoroughly enjoyed the Bartok. Dutoit seemed to bring out the best in the performers. As is often the case in San Francisco, the woodwinds were outstanding. The oboe, in particular, has a lot to do in this piece.

The highlight, however, was Steinbacher playing the Tchaikovsky. I very much wanted to hear her again, having attended her debut concert with the San Francisco Symphony, in March last year, with conductor Herbert Blomstedt. While that performance was solid, it was really the CD I purchased at halftime that evening that opened my eyes to the talents of Ms. Steinbacher. Her recording of the Bartok Violin Concerto No. 2 is wonderful--and now among my favorites (Pentatone Classics, PTC 5186 350). I had high hopes for a strong performance last night, and that's what we got.

After the first movement, the audience burst into applause. The Tchaikovsky concerto easily persuades those that don't know it well that it's over when in reality it's just getting up a good head of steam, but I got the feeling that a good measure of the applause was spontaneous and coming from people that knew very well that only the first movement had ended. They simply wanted to show their appreciation. And why not? It was a luscious but beautifully controlled performance. Despite a gritty throatiness to her violin in the mid-register (which I rather like; Ms. Steinbacher plays the "Booth" Stradivarius of 1716, on loan from its owner, the Nippon Music Foundation), the sweetest parts of the concerto sounded wonderfully sweet without ever becoming maudlin. Ms. Steinbacher gave the impression of being in complete control. Her phrasing was self-assured and distinctive without being idiosyncratic. The connection between the soloist and the orchestra seemed especially tight. Dutoit masterfully kept the balance about as nearly perfect as I can imagine. This was one of the best live--or recorded--performances I've ever heard of the piece. It was greeted with an extended standing ovation at its conclusion.

Memorable. I wish I could go again tonight and tomorrow. I look forward to following Ms. Steinbacher's career over many years in the future, and I hope she comes to San Francisco often.

[Photographs of Arabella Steinbacher and Charles Dutoit courtesy of the San Francisco Symphony.]
Posted by Colin Talcroft at 8:06 PM No comments:

Miscellaneous: Yet Another New Cocktail (February 29, 2012) 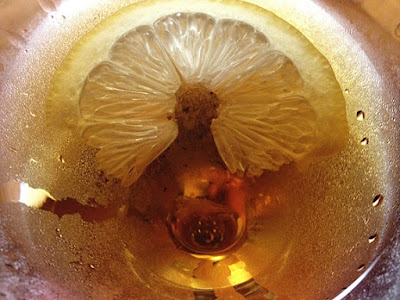 Rare it is to witness the birth of a classic. Presumptuous it is of me to think that this new cocktail I've concocted will become a classic, but, I rather like it, and I have high hopes for it. I've even decided to call it by my own name: The Talcroft. Here is the recipe.

Combine ingredients in a mixing glass with ice. Stir until thoroughly chilled. Strain into a well-chilled martini glass. Garnish with a paper-thin wheel of lemon.

This drink, like a classic Manhattan, perfectly balances the sweet and the dry, and spicy herbal flavors (in this case, the gin and the dry vermouth) with the sweet and the exotic (the Averna and the coconut rum). In short, it is a delectable opposition of disparate flavors. Making cocktails, I've decided, is very much like painting, but it's an exercise in painting with flavors rather than colors and textures.

Important note: the proportions above assume the use of the very distinctively flavored Bluecoat gin. A more neutral gin might require using a little less vodka and a little more of the gin. (The Bluecoat is delicious in martinis, too).

I imagine this drink could be made with a coconut-flavored vodka instead of the coconut-flavored Malibu rum, but I don't want to buy a whole bottle of coconut vodka just to try that out, and I suspect that using only coconut Vodka would make the coconut flavor too strong. The thing to remember is that the coconut should be in the background; its presence should be just apparent. It should be the sort of flavor that sends the mind searching for a name--something familiar but not immediately obvious. It should add an element of mystery rather than make a statement.

[Update: On the night of February29-March 1, we got an additional 0.40 inches of rain, bringing the annual total to 14.65 inches--still woefully short of normal.]
Posted by Colin Talcroft at 9:20 AM No comments: 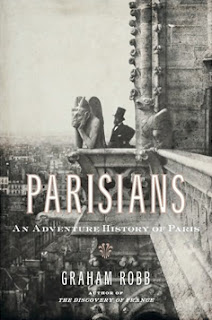 Having recently finished a book about the Eiffel Tower and the 1889 exposition it was built for, it seemed natural to move on to another book about Paris--Graham Robb's Parisians: An Adventure History of Paris (Norton, 2010). Here it's important to pay more attention to the subtitle than the title, as Robb's book isn't an exposition on the general characteristics of the people of Paris but rather a series of short, fictionalized pieces--in widely varying styles--based on real people and incidents, each illuminating a single facet of Paris. Some read like short stories. One reads like true crime fiction. One is presented as a screenplay. Taken together, these vignettes create a scintillating image of Paris through about 400 years of its history. The book is a delightfully non-linear stroll that allows layered, highly subjective glimpses of disparate corners of the city--glimpses that left me craving more.

I strongly recommend reading this with a good map of Paris within reach, or, even better, a copy of the Blue Guide to Paris and Versailles or another good guide book that is heavy on history. You'll want to follow Marie Antoinette's bungled flight during the Revolution. You'll want to follow Hitler along the streets of the city on his one and only visit to Paris. You'll want to see in your mind's eye the pattern of streets in St. Germain des Prés as you read through cinematic scenes that take place in the vicinity of the old church that gives the area its name. You'll want to find every one of the many avenues and monuments Robb's writing takes you to.

This is deceptively easy to read, yet so dense with information that I found myself wanting to re-read the entire book as soon as I'd finished it (and I had already read a couple of the episodes twice along the way). Virtually every page is a revelation. Highly Recommended.
Posted by Colin Talcroft at 11:27 PM No comments: 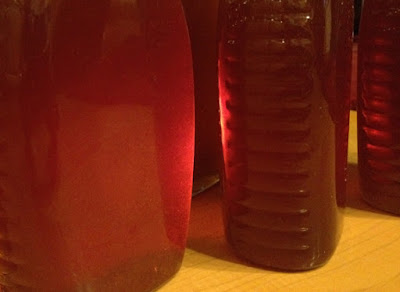 I got all the honey bottled up today. I harvested a total of 38lbs--quite a good haul--and there's plenty more in the hive. The flavor seems good. As usual, the kitchen is unexpectedly sticky here and there, but, everything went fairly smoothly this time. Now I don't have to worry about that again for at least 6-8 months.
Posted by Colin Talcroft at 6:29 PM No comments: 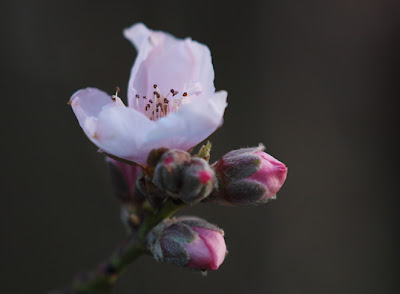 More pink flowers in the garden today. Today the first blossom opened on the dwarf nectarine at the back of the house (above). Yesterday the Nanking Cherry (Prunus tomentosa) started blooming. Warm weather in the past few days has coaxed out many flowers, but there was frost on the ground this morning and it's supposed to rain tomorrow. We need the rain, but I hope it doesn't cause the problems with fruit set again on the fruit trees....

The Nanking cherry bloomed on March 2 in 2009, on March 8 in 2010, and on March 5 in 2011, which makes it a bit early this year (February 26). The plant has calculated a year of only 357 days.
The dwarf nectarine, a slow grower, has nevertheless done well. The nectarines it produces are delicious--very intensely flavored. Every year I look forward to the ones the critters don't get. The nectarine bloomed on March 5 in 2009, February 27 in 2010, and March 2 in 2011. This year it's calculated a year of 361 days.

I note also that the golden currant (Ribes aureum) by the beehive is now in full bloom, having started to bloom quite suddenly on or about February 25. 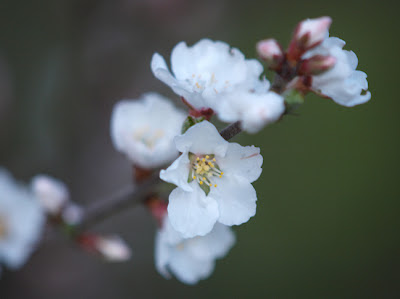 Posted by Colin Talcroft at 5:46 PM No comments: