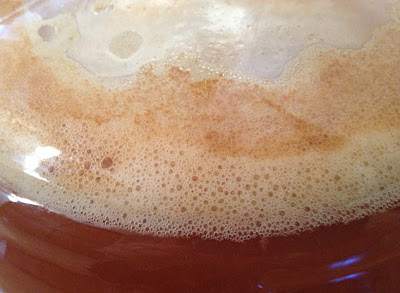 At Whole Foods (the Coddington Mall store) yesterday I noticed a growing section devoted to brewing supplies. I was intrigued by a vial of "English cider yeast" I found there. I made the assumption that it was a strain of yeast particularly suited to making hard cider. On the spur of the moment I bought the yeast and three gallons of pasteurized (but preservative-free) apple juice thinking I'd try to make my own cider. I have no idea if it will be any good or not, but, being used to fermenting grape juice to make wine, and having all the equipment already at hand, I thought I'd give it a try. I inoculated the juice last night (on the 30th) and a frothy fermentation is already under way. Stay tuned....
Posted by Colin Talcroft at 4:57 PM 2 comments: 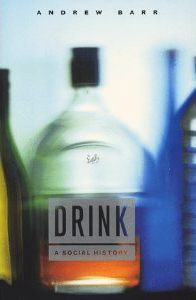 While this is somewhat out of date now, having been published in 1999 (Carroll & Graf), it remains an interesting discussion of how the role of drinking--specifically the drinking of alcoholic beverages--has evolved in the United States during the past 200 years or so. Barr makes it plain that--as in so many things--the US is rather out of synch with many of its counterparts among the developed countries of Europe. Our attitude toward drink has been rather unusual from the outset--the result of peculiar circumstances and later the effects of prohibition. First, because of the difficulty of obtaining fresh, wholesome beers and light wines (as opposed to fortified wines) in early colonial times and the difficulty of storing these perishable items in a comparatively hot climate), American colonists early became dependent on rum and madeira, the former because it didn't spoil and was cheap and easy to make, the latter because it survived (and even improved) on long ocean journeys.

The heat of the southern colonies and the long distances between settlements in colonial times contributed to a reliance on rum and madeira rather than on the beers and ales favored in Britain or the unfortified wines common on the continent, both of which perished quickly without refrigeration. It was no help that despite the abundance of wild grapes in the United States (none of which made good wine), European grape varieties stubbornly refused to take hold in the New World, repeatedly falling victim to the vine diseases that attacked the native varieties (which have developed immunities European grape varieties lack).

As a result, Americans on the whole never developed a solid tradition of drinking light alcoholic beverages (beers and wines) with food, as an ordinary part of a leisurely meal. That tendency, exacerbated by prohibition (and the partial prohibition of alcohol to teens and into the early 20s that continues today) has left most Americans with a binge drinking mentality focused mostly on hard liquors that, ironically, was precisely what the original prohibitionists aimed to combat. I've long thought that college binge drinking and other abuses would be far less prevalent if we taught our children about responsible, pleasurable, moderate alcohol consumption from the early teen years. Barr makes this same argument cogently and with much evidence to back up his claims. Chock full of interesting detail about drink and our attitudes toward alcohol. Well worth a read. Recommended.
Posted by Colin Talcroft at 4:14 PM No comments:

Food I'm Eating: What Was that Cheese? 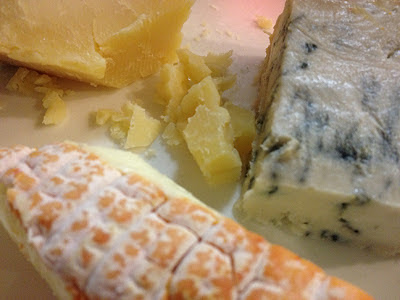 No pun intended, but I'm feeling a little sheepish. I've teased many friends and acquaintances over the years when they come to me asking about wine, which, knowing my interest in wine, they fairly often do. I tease them during conversations that typically go like this:

Friend: "I had this wonderful wine the other day..."
Me: "What was it?"
Friend: "I don't know, but it was REALLY good."
Me: "Where was it from?"
Friend: "I forgot."
Me: "Why didn't you look at the label and write down what it was, so you'd remember, or keep the label, or take a photo of it?"
Friend: "Well, you know, we were all having a good time and talking, and by the time we'd paid the bill, the waiter had already taken the bottle away." or "Yeah, I didn't think to do that. That was last week. I think the trash has already been collected...."

I never have this problem with wine. First, I know an awful lot more about wine than I do about cheese. There aren't that many wines I've never heard of or for which I have no points of reference. Second, I'm not shy about securing evidence when necessary. I never hesitate to take the empty bottle home from a restaurant or to set it aside at home or to remove the label from the bottle, for future reference. If an unfamiliar wine is different and compelling, I usually write something about it--on this blog, in many cases--which preserves the information. When it comes to cheese, however, I'm much less careful, too often to my later regret. I've encountered countless delicious cheeses that are lost to me forever for want of information about what I was eating. Recently, I've tried to do better. Sometimes, however, the cards just seem stacked against me.

A few days ago I sampled a number of tasty-looking cheeses at the cheese counter of The Pasta Shop at the Rockridge Market Hall, in Berkeley (510) 250-6005, and bought a few that I liked. The problem with cheese is that the label on the cut pieces you buy at a good cheese shop are almost invariably slapped on to the package at the folds, to hold the wrapping closed. As a result, the label usually has to be ripped to pieces to open the cheese. In this instance, I particularly enjoyed a smoky, pungent blue cheese I bought, that, judging from its color, is a goat cheese. Thinking myself very smart this time, I retrieved the paper it had been wrapped in as soon as it dawned on me that I especially liked this one. I was determined to remember the name of the cheese, but I picked the paper out of the trash only to find that the tasty little brick had been labeled "Cheese!"

Not very helpful, to say the least. With an exclamation point, no less. I was being mocked.

I want to believe this was just a freak error on the part of the helpful young woman that wrapped the cheese for me, but I'm feeling vaguely persecuted. The other two cheeses (a Cabot "Cheddar" from Vermont and a French cheese called Brebirousse d'Argental) were properly labeled. I grant you that. Still, I feel laughed at.... 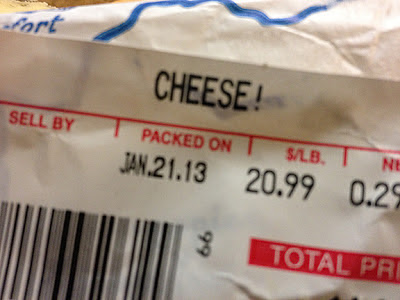 Posted by Colin Talcroft at 10:46 PM No comments: