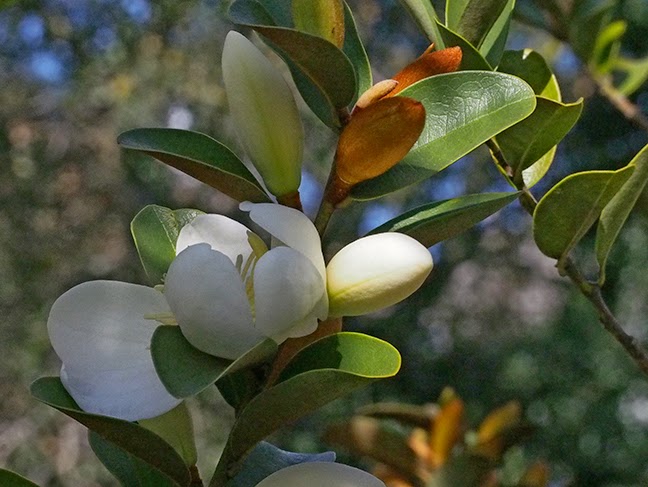 The Michelia yunannensis in the side yard (a magnolia relative) starting blooming on March 1 this year. First blooms on March 2 on the Nanking cherry by the birdbath (Prunus tomentosa), a bush cherry with very delicate pretty, barely pink blossoms. First blooms on the two-toned daffodils in the front yard on March 3. 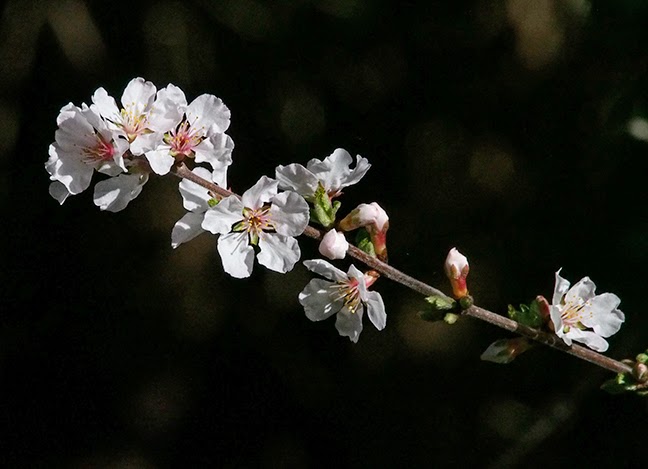 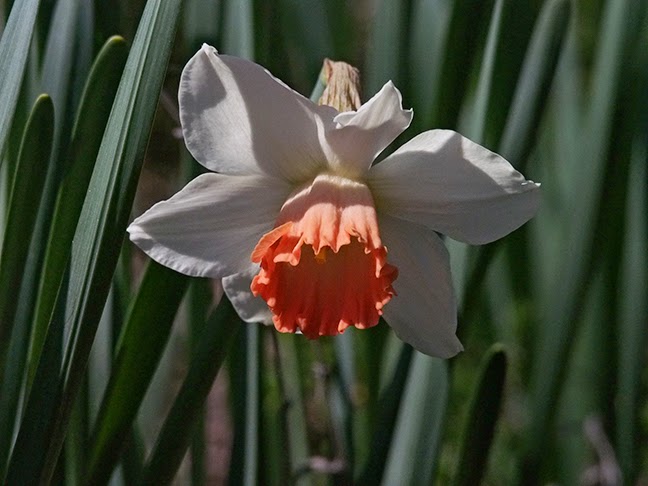 Posted by Colin Talcroft at 9:20 AM No comments: 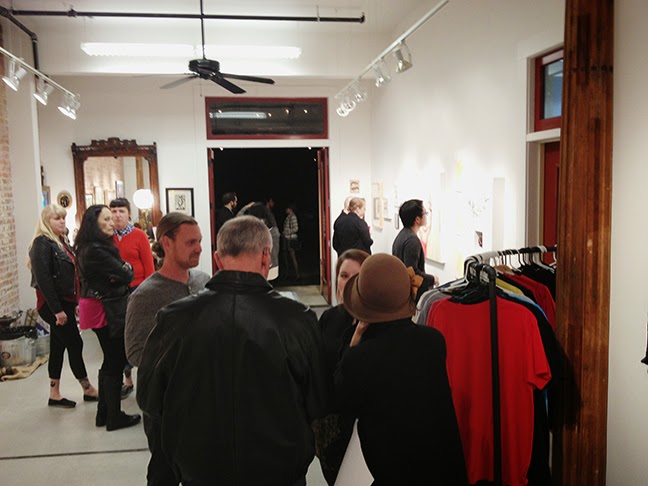 I particularly liked the small pieces by Meg Regelous, whose work I've seen before at the Healdsburg Center for the Arts. She's showing a drawing, an etching, and what looks like a linocut, suggesting the wide range of her activities. She's young, enthusiastic, and stylistically still evolving, perhaps, but I look forward to watching her career. 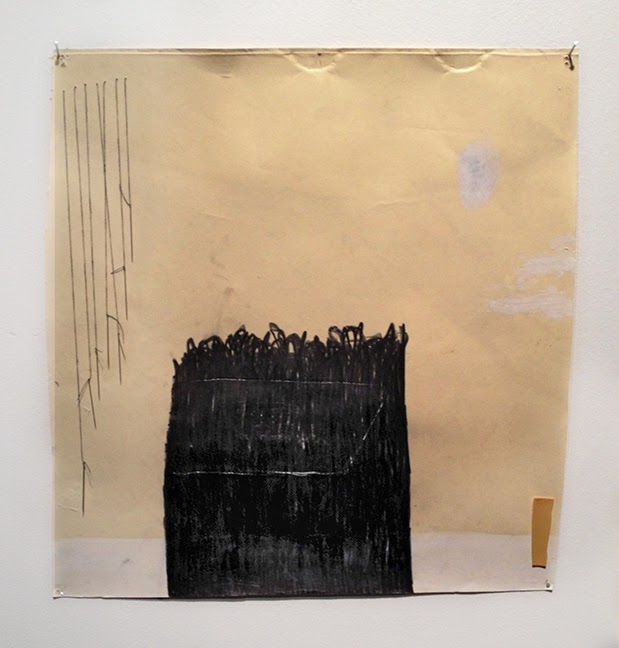 I had a long conversation with Jaynee Watson. She appears to be mainly a performance artist, but her contribution to the Ladies Night show is two mixed media pieces--Nothing More/Less #1 and Nothing More/Less #2. They are not quite collages but not straight drawings either. Both are done on backgrounds of what looks like thin card stock rather crudely cut into near-rectangular shapes onto which she's painted with latex, gouache (perhaps), and drawn on with pencil and black crayon. What at first glance look like graphite lines in the images are actually fine sewing needles suspended from threads, their effect subtly doubled by shadows. A scrap of plastic is attached in the lower right corner of Nothing More/Less #1 (shown here). Semi-circular dimples at the top of the sheet are actually bite marks. The sheets are shown unframed, nailed at their corners to the wall.

There is no pretense of prettiness in Watson's art or the way it's shown. The work is direct, simple, accessible, unfinished, bare. The corners of the sheets are perforated with overlapping nail holes, evidence of previous hangings. It was hard to resist the temptation to play with the dangling needles or to run a finger over the bite marks or to feel the surface of the small plastic piece attached to Nothing More/Less #1. I suspect Watson wouldn't have minded. The works invite interplay. They have a palpable vulnerability. They are open to accident, vandalism, wear, and she has deliberately chosen non-archival materials. Nothing More/Less #2 uses strips of what look like black electrician's tape (when I asked, she explained the tape was the seal from a tin of printmaking ink) and other inexpensive plastic tapes that will deteriorate and probably stain the underlying sheet. She told me human beings don't last forever and that their art shouldn't either. I found the insouciance behind the works made me a little uncomfortable. I almost wanted to clean them up, to make them neater--yet I found these unabashedly unpretentious pieces of art strangely compelling at the same time. 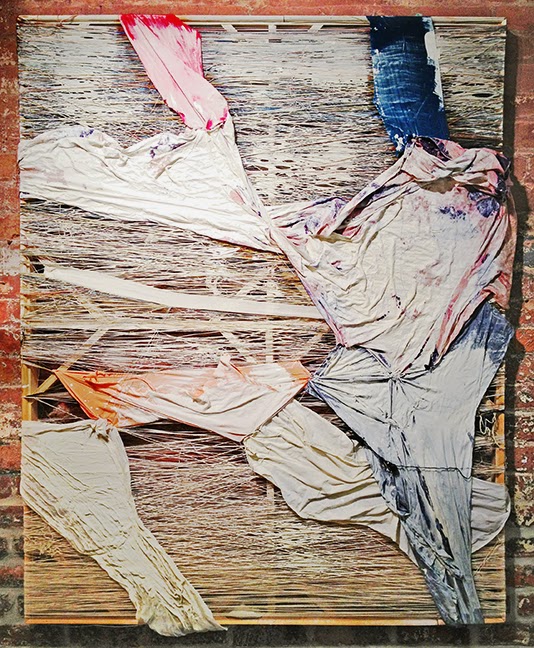 Perhaps my favorite piece in the show is a painting by Angelina Maria Rodrigues called Flight. Painting isn't quite the right word. Like Watson's two pieces, Flight doesn't fit well into a category. The surface is not really a surface. It's made up of numerous fine strands of variously colored yarn wrapped around what looks like a canvas stretcher. Onto the yarn layer, Rodrigues has attached pieces of cloth--some that look like fabric scraps, others that look like pieces of clothing or lingerie--and the whole is splattered with what she described as "house paint." The lighting was difficult. My photograph here doesn't do the piece (or Watson's piece) justice; the yarn layer is subtly colored. The variety of textures is a pleasure--the yarn, the yarn with paint on it, the unpainted fabric, the paint-splashed fabric, the strip of smooth unpainted canvas at middle left, the different textures of the fabrics (some of which look like nylon stocking material), and the wood of the support are all different. This thick wooden armature and the gaps in the yarn layer, which allow you to see through to the back side of the piece and the wall behind it add depth--literally. There is also a slightly titillating tension as you go back and forth between viewing the piece solely as an abstraction and being drawn in to an examination of the fabrics as pieces of clothing, which can suddenly give you the feeling of looking at a pile of someone's laundry, some of it intimate. I look forward to seeing more of this artist's work. 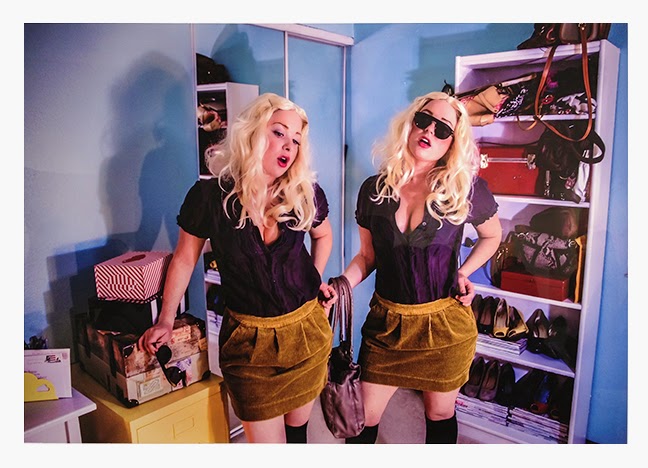 I also enjoyed a tongue-in-cheek pair of photographs by Kadie Sue Anderson. The Blond Bimbo Beauties, shown here, is a send-up but it's attractive for its formal qualities at the same time. I like the use of color--the overall palette--but especially the train of yellows that runs from the mail holder at bottom left through the filing cabinet, the two skirts, the yellow shoes in the book case, and the paper folder there. The shadows on the wall behind the figures are beautiful in their own right. I also like the way it's so easy to imagine the women singing. You can almost hear this image.

I thought pieces by Jamie Drobnick, Angella Dela Cruz, and Cammy York also of interest. The show at Griffin Map Design & Gallery (405 East D Street, Suites D and F, Petaluma, CA 94952--707 347-9009) will run through March 28. Curator Justin Ringlein has chosen some good art. Worth a visit. Next to the Ice House Gallery (which will be showing new work from March 14).

Posted by Colin Talcroft at 4:01 PM No comments: 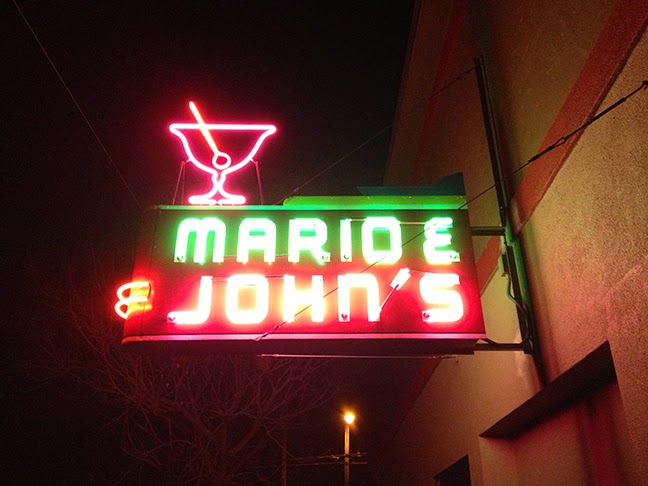 Last night I attended an art show opening at Griffin Map Design and Gallery on D St., in Petaluma. On my way home I noticed Mario and John's Tavern, at 428 E. D St. Here I add it to my small but growing collection of neon cocktail glass signs. I liked this custom neon sign for the unusually squat cocktail glass on top.

To see others in this series of photographs, click on the "cocktail glass collection" label.

Posted by Colin Talcroft at 2:17 PM No comments: 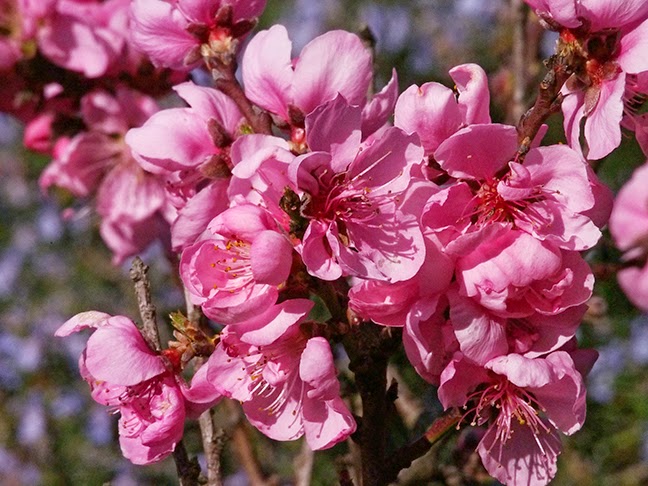 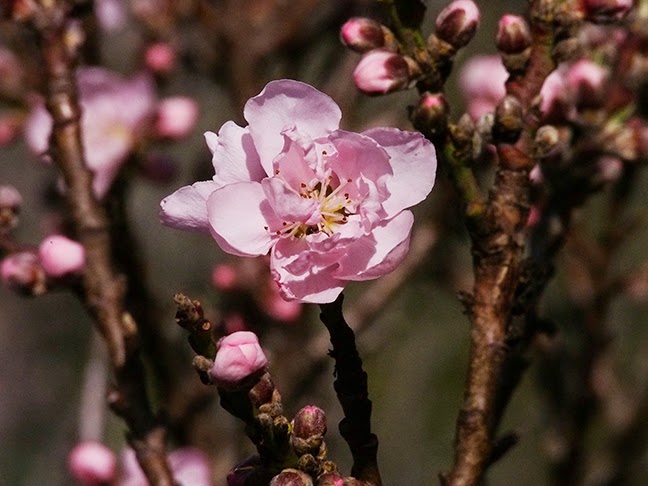 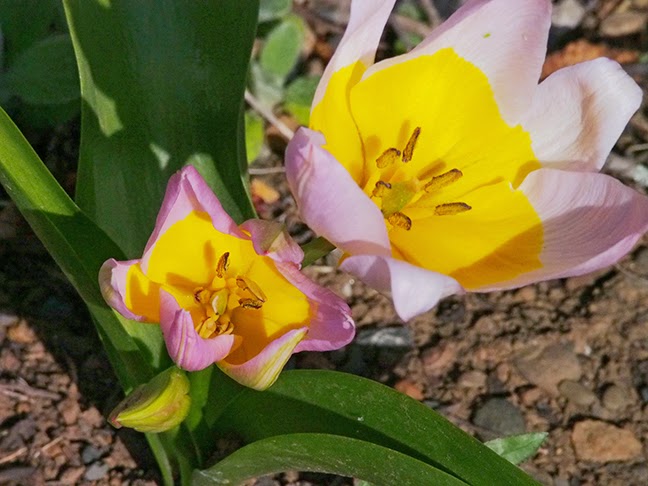 Posted by Colin Talcroft at 2:09 PM No comments: