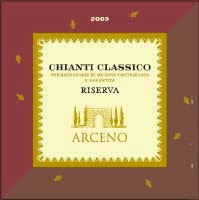 A rather deep, more opaque red than Chianti Classico often is, this one showing its age, the color tending toward garnet. Leather, meat, wood, and stewed dark cherries on the nose. There was something about it that put me in mind of a wine made from the Carmenere grape--often meaty and leathery on the nose. I read later that the blend contains a considerable amount of Merlot ( a little under 20%, most of the remainder being Sangiovese), and the addition shows. A hint of cloves on the nose as well. Full-bodied (the wine seems quite alcoholic, although it's a fairly typical 13.5%) with deeply extracted fruit on the attack balanced by good acidity and chewy tannins. Chocolatey on the mid-palate and with a moderately extended finish marked by a hint of cola and bitter almond at the very end. Has character. Delicious, and a bargain at the Rohnert Park Grocery outlet at only $6.99 a bottle. This wine usually retails in the $20-$28 range. I'll be going back for more.
Posted by Colin Talcroft at 6:49 PM No comments: