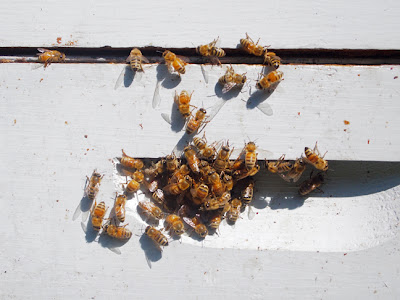 Yesterday I was offered a swarm of bees in Vallejo, about an hour's drive away, but it was worth the trip. My bees died over last winter. I was looking for a swarm. New bees are now about $100 for a hive start, which seems a lot of money, as I bought my first package of bees for only $35--but that was back in 2001 or so--long before so many bee colonies began failing. I had to climb up on a garage roof and help the owner, a beekeeper himself (thanks, David) lop branches off a plum tree to get to the cluster of bees. I got them in a box prepared for the purpose and then drove home with them on the seat beside me. In the late afternoon, I deposited the swarm in an empty hive. The bees were rather agitated for a while and a couple of groups spent the night in little clusters outside the hive, but, by this morning, they seemed to have taken to their new home and I'm hopeful they'll thrive. It takes about 21 days to raise a new bee. By the first week of May I should know if the queen is laying and worker bee numbers are growing.
Posted by Colin Talcroft at 7:44 PM No comments: 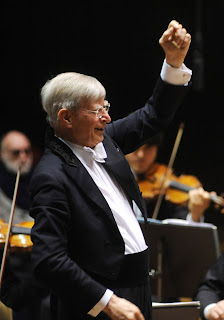 On Friday night (April 19) I had the pleasure of attending a San Francisco Symphony performance. Conductor laureate Herbert Blomstedt led the orchestra in Beethoven's Violin Concerto and the Nielsen Symphony No. 5. German violinist Augustin Hadelich was soloist in the Beethoven concerto.

I suspect Mr. Hadelich made quite a few new fans on Friday night. His articulation was remarkable. The performance had a wonderful clarity. I heard notes in the concerto that I wasn't even aware were there--perhaps because many violinists slur them most of the time. I don't know, but the overall impression was one of breathtaking precision--which is not to say that the playing lacked lyrical qualities where lyrical qualities were required. Hadelich had a way of slightly cheating the duration of certain notes at the end of phrases that created an interesting tension. 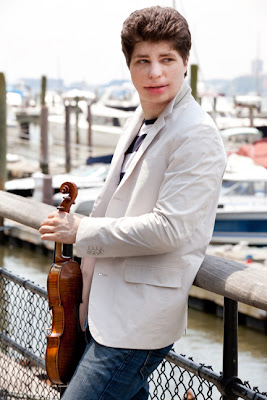 Mr. Hadelich, according to the program notes, plays the 1723 Ex-Kiesewetter Stradivarius, on loan from Clement and Karen Arrison through the Stradivari Society. I'm not aware of having heard this instrument before, but it had a kind of middle-of-the-road clarity that seemed well suited to Mr. Hadelich's controlled, no-nonsense style. I think this is a fairly late Strad. Stradivarius's extant violins range from 1666 (the Ex-Beck) to 1737 (the Lord Norton and the Comte d'Amaille). Some of the earlier ones seem to have rather stronger characteristics. The 1716 Booth, played now by Arabella Steinbacher, for example, has a certain gritty throatiness in the low register but sounds sweet at the high end. The 1715 Ex-Marsick that James Ehnes plays is rather sweet sounding throughout the range. Joshua Bell's 1713 Gibson Strad is especially lush sounding, which seems appropriate given Bell's fondness for rather romantic works.

Overall, very impressive. This was among the best performances of the Beethoven Violin Concerto I've ever heard. The audience seems to have agreed with me. The members of the Symphony onstage seemed mesmerized listening to the cadenzas in the solo part and the hall burst into spontaneous applause at the end of the first movement. Much has been said recently about whether or not to applaud in the middle of multi-movement classical pieces. Generally, I like to hear the whole before applauding, but the audience was thrilled and I have every sympathy for the expression of appreciation in this case. Conductor Blomstedt, however, clearly disapproved, gesturing to the audience to stop with fingers waved behind his back (and apparently annoyed again at the end of the first movement of the Nielsen--although in that case, I suspect the applause was simply the result of confusion about whether the music had ended).

At the close of the Beethoven, Mr. Hadelich received a long standing ovation, to which he responded with an encore. I was pleased that he announced beforehand what he was going to play (Paganini's Caprice No. 24). I have no doubt I would have recognized it as a Paganini caprice, but I would have had to do some research to figure out which one it was. It's funny how very familiar pieces of music can be difficult to put a name to.

After intermission the ensemble played the Nielsen symphony--a rather expansive piece that seems always to be spilling out of a vessel too small for it. In some sections, it gave the impression of a solid wall of sound that was difficult to process. Elsewhere, the music became suddenly more melodic. There are some interesting textures here, but it was a lot to absorb all at once. I've certainly heard this before. I may even have a recording of it, but it's been a long time. While I've always found Nielsen interesting, and I certainly have a number of recordings of his music, they aren't recordings of music I turn to repeatedly. It's been many years since I've heard much Nielsen at all. I remember buying several Nielsen LPs in college at what was then my favorite haunt--Mole's Records, in Columbus, Ohio. Perhaps it's time to listen to some of them with more mature ears.

Had a tasty dinner afterwards at Absinthe. The yam and goat cheese ravioli were delicious. The emphasis was more on the yams than on the goat cheese. The slight sweetness of the yams went very well with a Fonsainte Grenache rosé I had from Corbieres. I enjoyed my appetizer (tuna tartare) with a Pouilly Fuissé.

Photographs of conductor Herbert Blomstedt and violinist Augustin Hadelich courtesy of the San Francisco Symphony.
Posted by Colin Talcroft at 7:30 PM No comments: