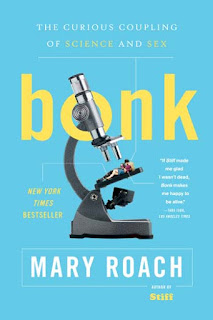 Mary Roach is something of a national treasure. She has a gift for looking a subject in the eye, not flinching, and then writing about it forthrightly. She has an infectious curiosity, a sharp eye for irony, and a witty style that manages to make difficult subjects funny. She happily charges in where most will only tiptoe. It's a shame more people aren't as openly and honestly inquisitive (and eager to share) as Mary Roach.

I immensely enjoyed her book Stiff (2003), which examines human corpses—or, as that book's subtitle puts it, "the curious lives of human cadavers." Bonk, which looks at the history of the science of sex (mostly in the modern era, but with quick looks back in time here and there) promised to be equally entertaining. It didn't disappoint. Although Roach digresses in footnotes a little more than seems prudent sometimes, she paints some indelible pictures. Some of these are fun, such as her description of a day visiting a group of Danish hog farmers that artificially inseminate pigs (trying to boost productivity by making things more pleasurable for the sows). Other vignettes are not for the squeamish—notably the vivid tale of Dr. Geng-Long Hsu performing radical penile surgery at his Microsurgical Potency Reconstruction and Research Center, in Taipei. On the whole, though, an entertaining romp through the world of research on sex.
Posted by Colin Talcroft at 12:19 PM No comments: