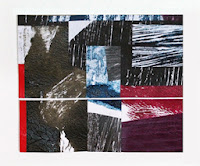 My pace of work making collages has slowed, but I've done a couple more since last reporting. One is a very small piece (only about 3 x 4 inches) made from small scraps from all the other things I've made in the past few weeks. The other is a monochrome piece I made out of scraps of paper I had intended for a different collage--but no matter. Both are made from painted paper and monotyped paper elements. The originals look much better than the photos here. One thing I've learned is that photographing art is an art in itself.

[Update: I subsequently destroyed the second of these, so I have removed the image of it here. I decided it wasn't worth keeping.]

Posted by Colin Talcroft at 6:11 PM No comments: 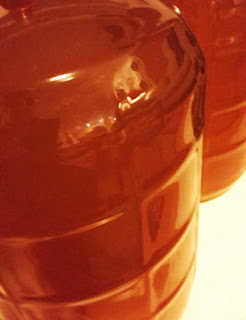 On Friday, December 6, I racked the hard cider I'm making off the gross lees. I started fermentation on November 18, so fermentation took about 18 days. The cider is working in two five-gallon containers. Although I inoculated 11 gallons of juice, I used the extra gallon to top up the two other containers after the racking, which reduced the volume of both somewhat.

Having used two different yeast strains (see the last post on the subject of hard cider for details), and having left the two batches in different parts of the house (one warmer than the other), the batch using the White Labs yeast, in the cooler location, was slightly behind the other, but bubbling has mostly stopped in both containers--although it's been so cold the past few days, even in the house, that lower temperatures may have suspended what final activity there was in both cases, activity that will have to start again once the liquid is bottled and a little sugar added back to feed a second, in-bottle fermentation to create carbonation in the finished product. So far, the White Labs batch tastes noticeably better than the other. I'm not sure exactly why. It may just be the slight amount of residual sugar in the White Labs vessel. Both have a slight hydrogen sulfide smell, however, which is not desirable--although I think  easily corrected. Hydrogen sulfide production is usually the result of inadequate yeast nutrients during fermentation. I did use the recommended dose of Fermaid K as well as DAP (diammonium phosphate), which together are supposed to prevent hydrogen sulfide production. It's time to call The Beverage People for advice. It's still much too early to know what the finished cider will be like.
Posted by Colin Talcroft at 6:14 PM No comments:

A little rain in the past few days (mostly on December 6) has added 0.75 inches to our 2013-2014 total. We have had only 2.80 inches so far at my location in Santa Rosa, which is well below normal--more than 5 inches below normal for the first week of December.
Posted by Colin Talcroft at 5:29 PM No comments: