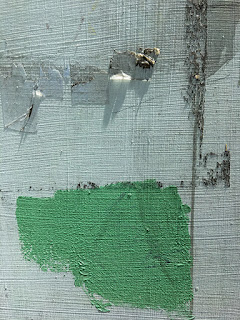 A patch of paint, a spill, pieces of tape, and light came together to make this unintended composition. Serendipitous art.

Click on the image for a larger view. For more unintended art, see my blog Serendipitous Art.
Posted by Colin Talcroft at 10:11 AM No comments: 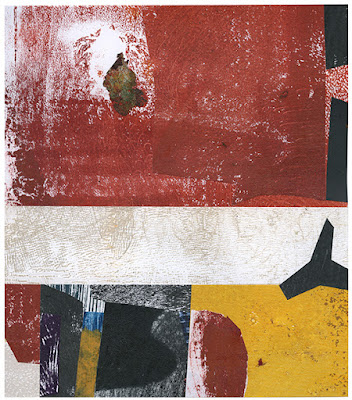 For more, visit my collage website at: http://ctalcroft.wix.com/collage-site/
Posted by Colin Talcroft at 9:32 AM No comments: 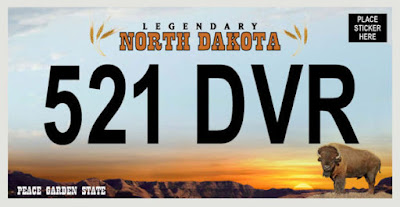 Yesterday I spotted a car near Santa Rosa, CA bearing a North Dakota license plate. That's not a big deal, except in the context of a game I've been playing with myself for about three years now. I've been trying to see a license plate from each of the 50 United States--without going out of my way to do that. I had been stuck at 48 states for well over a year.

North Dakota was one of the two I'd never seen (oddly, South Dakota is moderately common around here; I've seen South Dakota plates a handful of times). Logically, Hawaii and Alaska would seem the most unlikely in Northern California, but I see Alaska plates once or twice a month and Hawaii not infrequently either. In addition to the 49 states I've now seen, I've seen plates from Washington D.C. and even the Marshall Islands--all in the course of my regular wanderings around the San Francisco Bay Area. One state still eludes me.... Care to guess which one it is, or what the other rare ones seem to be?
Posted by Colin Talcroft at 12:25 PM No comments: I've long had Hooded Oriole on my list of yard birds as I define a yard bird as any bird I see on my property or FROM my property. I've seen them in tall trees in a neighbor's yard, but never in my own garden until a few days ago. A female Hooded Oriole, probably a young bird, was in a bush right outside my kitchen window. I got a nice photograph of it even though I had to shoot through a window screen. I feel like I can count it as a more authentic yard bird than before.
Posted by Colin Talcroft at 9:44 AM No comments: