Substantial rain again last night--amid talk of possible snow over the weekend. We got 1.3 inches overnight, raising the total for the current rainy season (July 2010 to end-June 2011) to 24.2 inches. That's right in line with the historical average of 24.13 inches for February 25. Average annual rainfall in Santa Rosa has been 31.01 inches historically.
Posted by Colin Talcroft at 9:19 AM No comments: 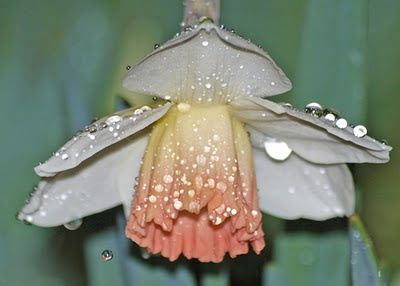 First blooms today on the two-toned daffodils in the garden. I don't know the name of the variety in this case, but it's distinct from any of the more common all-yellow daffodils. I was sure I noted the first blooms on these last year, but I can't find the record. I didn't post anything to the blog, it seems. I'll amend this if the data turn up. I think I planted these in late 2008. This should be their third year blooming. In any case, they're pretty. I will probably plant more. They provide a nice contrast with the yellow flowers (also blooming right now).

I took this photo of them late at night in the rain (the things I do for this blog....), which resulted in a somewhat surreal image. I used a flash. A drop of water is caught suspended in mid-air at lower left. You can even see an image of the flower within the water droplet.

[I found the information I was looking for. The two-toned daffodils bloomed on February 22 in 2010, for a year of 367 days.]
Posted by Colin Talcroft at 11:36 PM No comments: 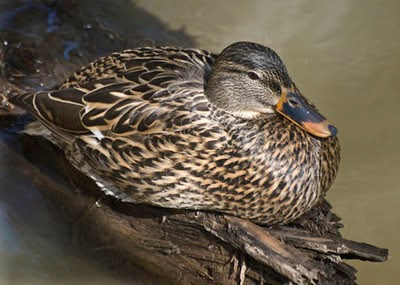 I took a walk around Spring Lake today for the first time in a while, trying to get a little exercise and enjoying the sunny, relatively warm weather. I didn't see anything unusual, but there were a lot of birds around--36 species (which is moderate for Spring Lake, but a lot of individual birds). There were many Pied-billed Grebes (14!) and there were Yellow-rumped Warblers everywhere (I counted 22--13 of the Myrtle type, three of the Audubon's type, and six that I didn't see well enough to tell which). There were probably more than I actually counted. After a while, it's hard not to start feeling blasé about them when there are so many--still, despite being common at this time of year, they are pretty birds.

Perhaps I was dimly aware that 2010 marked the 150th anniversary of the start of the US Civil War, but it wasn't really on my mind when recently I turned to reading Bruce Catton's three-volume history of the conflict (Phoenix Press, 2001, but, originally published 1961-1965, to mark the Civil War centennial). I received the set as a birthday gift years ago. I just happened to get around to the books at what has turned out to be an appropriate time.

Totaling 1,430 pages, the trilogy (The Coming Fury, Terrible Swift Sword, and Never Call Retreat) is considered by many to be the definitive treatment of the conflict between the North and the South, but I think first of Shelby Foote's trilogy (Vintage, 1986; Fort Sumter to Perryville, Fredericksburg to Meridian, and Red River to Appomattox), simply because I read it first--probably 15 years  ago now, in the mid-1990s. Speaking in the broadest terms, the two authors have done much the same thing--painted a comprehensive picture of the causes of the war, looked at the struggle itself, and then considered the state the Union was in when fighting ended and after Lincoln's assassination. The story, constrained as it is by fact, is the same. However, the flavor of the two sets of books is rather different.

I must admit, I preferred the Shelby Foote books. When I read them, I thought it difficult to imagine anyone doing better. I still feel that way, but the Catton trilogy is well written, enjoyable, and recommendable.

The main differences, it seems to me, are in how the writers feel about whether the South could have won the war and in the way the two use anecdote. Foote suggests that indeed the South might have won and that the victory of Federal forces over the South was not inevitable. If I remember correctly, I was well into volume two before I began to relax--that is, before I began to feel reassured that the story would end the way I knew it had to end, with the utter defeat of the South. Catton concedes that the Southern soldier was a determined fighter, that the South won many important battles, and that northern generals were oddly ineffective early in the war, but at every turn he takes pains to suggest that it didn't matter, that the rebels never really had a chance--mainly because of inadequate resources. Both men are right, of course, but Foote somehow gets better mileage out of the drama.

Foote is a master of the anecdote. His narrative is deftly interwoven with vivid sketches of people and particular events that stick in the mind. I can recall many of them even fifteen years later--even if at this remove I'd have to go back to the books, search the stories out one by one, and reread them before I could with confidence recount any one of them in detail. Whose death was it that was supposedly heralded by a pair of Mourning Doves? Which confederate general was in danger of being hacked to death by a lone Union cavalryman that happened upon him when he was unescorted? Who brought in carpenters to extend Lincoln's too-short berth on the boat that brought him to see Grant at the front? What was the story about Jefferson Davis and confederate gold? As I say, I'd have to re-read the three books, but the flavor of the writing created by Foote's liberal use of the particular has remained etched in my mind and the books were riveting at the time. I remember the pleasure of reading the details more than the details themselves, but the books were indeed a great pleasure to savor. Catton's style, although fluid and clear, is comparatively unadorned with this kind of color.

One particular effect of Foote's style was that he left me with a much greater sense of the horror of battle in the 1860s. Essentially the Civil War was a war fought with modern weapons (repeating rifles) but still in many instances using the tactics of the past (with men, inexplicably, still consenting to stand in rows and shoot each other to death at close range). Beyond such subjects as the effects of bullets and artillery on infantry and the realities of amputations and other battlefield medicine, Foote discusses defensive works and armaments in more depth than Catton, he talks about paroles, prisoner exchanges, and prison camps, and he goes into greater detail and into a greater number of battles than Catton (for example, covering the Red River Campaign, which Catton mentions only in passing). Foote left me feeling as if I'd been there from Sumter to Appomattox. In short, Foote's account was more vivid and colorful and it was farther-ranging.

Comparing the two and arguing about which is better seems to be a much-played game. I amused myself last night for an hour or so reading posts on various Websites by partisans on both sides of the argument. Those that prefer Catton seem to fault Foote mainly for a comparative lack of footnotes, casting aspersions on his sources by implication, although nobody seems to have specific lapses to point to; the critics claim a general uneasiness and favor Catton for being an historian rather than a storyteller. I, for one, am willing to take it on faith that Foote wasn't making things up as he went along, and telling a good story seems no fault to me.

Some that prefer Catton suggest Foote's account is tainted by Southern sympathies, Foote being a southerner himself. I felt he struck a rather good balance, and I say that as a Northerner (if anything--it's not really part of my self-image); I lived a short spell in St. Louis, but I was born in New York, lived a long time in Ohio, and my Civil War ancestors were Ohio volunteers, mustered out of Holmes or Stark County. One fought at Chattanooga, Lookout Mountain, and Missionary Ridge, and was wounded at Chicamauga (my mother has the bullet he was shot with). He was among the many German immigrants granted US citizenship in exchange for a three-year stint in the blue uniform of the Union. He left the service at Marietta, Georgia close to the end of the fighting. Another ancestor was captured at Gettysburg and died in Andersonville Prison.

What no one seems to disagree about is that these trilogies are the finest two overviews of the Civil War we have. Perhaps the best approach is to read them both, Catton, then Foote. Follow that with Jay Winik's excellent April 1865: The Month that Saved America (Perennial, 2002; first published in hardcover by HarperCollins, 2001)--a superb book focused on the very end of the war, Lincoln's assassination, and the nation's halting new beginning after the war--and you're likely to come away with a very well-rounded appreciation of the meaning of the US Civil War and its aftermath.

[Update: Not long after reading this, I read Doris Kearns Goodwin's Team of Rivals (Simon & Schuster, 2005)--another excellent Civil War book.]
Posted by Colin Talcroft at 6:43 PM No comments: 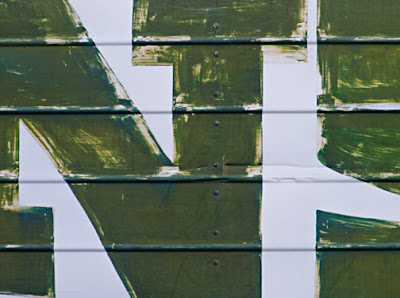 Near the YMCA in Santa Rosa is a large open field that is full of little-used moving vans painted with bold lettering. Bold but faded and old. Interesting abstract shapes. Found art.

It's been just over three weeks now since I determined to try to make olives--eating olives, that is--from the bitter black fruit on our backyard olive tree. I went into the project with a fair amount of skepticism, having tasted unpleasant homemade olives in the past. Tasting my efforts now after three weeks in brine, I'm pleasantly surprised. The bitterness is all gone. The olives have a nice fruity quality. Best of all, it was a rather easy thing to do. My only reservation is that they taste a little saltier than I would like. I wonder how you regulate the saltiness? That seems rather hit or miss. Perhaps by adjusting the brine? I used 1/4 cup of salt for each quart of water. Nevertheless, I'm inspired to do another batch already.

These will sit in the brine another week or so, then I'll package them (in jars, still in the brine, with a layer of olive oil on top. They're supposed to keep that way for a month or two).

My original post on the subject of making olives

The olives before starting their soak in brine (left: each berry has been scored with a knife blade, to allow the brine to penetrate; below, the more-or-less finished product). 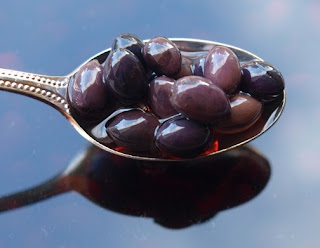 Posted by Colin Talcroft at 1:27 PM No comments: