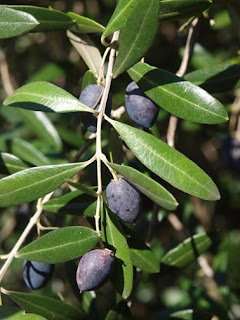 There are two olive trees in my garden. One I planted, the other was here when I arrived. The one that came from a nursery bears no fruit. The one already here was a mere bush ten years ago. Somehow it turned into a tree while I wasn't paying attention. It's now about 30 feet high and this year, for the first time I can remember, it's heavily laden with small purplish black fruits--olives. The optimists of the world say that if life gives you lemons, you should make lemonade. Given fresh olives, I decided I should make olive oil or proper olives for eating. Making olive oil requires equipment that I don't have and large quantities of olives reduce to rather small amounts of oil, it seems, so curing the olives for eating made more sense. Having made that decision, I had to admit to myself that I had no idea how to transform a terribly bitter, astringent, fresh olive (ever bit into a fresh olive?) into one of those tasty salty orbs we all know and love.

I did have some idea, actually. Rightly or wrongly, I seemed to think that making olives involved lye and salt, but I wasn't exactly sure. Not that long ago, I would have headed to the library at this point, but I turned instead to the Internet and learned there are four principal ways to make olives--more if you count some of the variations. Fresh olives can simply be soaked for weeks in water. With daily changes of the water, bitter components leach out of the fruit to yield an edible product. But that seemed too simple. No romance in that.

At the other extreme is the method involving lye. Essentially, lye accelerates the result that water achieves--removal of the bitter components (mostly phenolic compounds and the glycoside oleuropein, according to Wikipedia). Somehow lye seems as unromantic as plain water, though--and dangerous to boot--so I rejected that idea. The other two methods rely on salt. Fresh olives can be simply packed dry in salt for long periods or they can be soaked in brine. As this last method seemed easiest, I opted to try brine-curing the small black olives the tree in the garden produces.

After picking several pounds of olives, I went back to the Internet and more carefully read the directions I'd found for making brine-cured olives. I was a bit annoyed at myself when I read that the skin of each olive must be broken. I wouldn't have picked so many if I had imagined making an incision in the side of each of the 800 small olives I had to process, but it turned out to be relatively easy work, taking only about an hour.

I made a brine solution of 1/4 cup salt to one quart of water and dumped it over the olives, which I had washed once (enough brine to ensure that all the olives were submerged). I covered the container and set it aside. Yesterday, after three days (stirring the solution and the olives once a day), the cover suddenly popped off. The olives had started fermenting. I hadn't read anything about fermentation or allowing gases to escape, so I assumed fermentation was not a good thing and added more salt in the hope of stopping it. Reading more today, I see that it's normal and the container is not supposed to be tightly sealed. In any case, the fermentation seems to have slowed. There is less bubbling going on. I'm not sure that has anything to do with the extra salt or not. I have no idea whether the water is now too salty, but I'll be changing it in a couple of days anyway. My recipe says that curing the olives will take about six weeks (with the brine renewed once a week). Already the olives are more palatable than they were fresh, so, I'm optimistic. Now, it's just a waiting game..... Stay tuned.

[Update: The Olive Project--Continued]
Posted by Colin Talcroft at 12:22 PM