Last night, Friday February 4, I attended a San Francisco Symphony concert featuring Chee-Yun, Alisa Weilerstein, and Jeremy Denk as soloists, with Marek Janowski conducting an all-Beethoven program that opened with the Symphony No.1 followed by the Triple Concerto, and, after intermission, the Symphony No. 2. 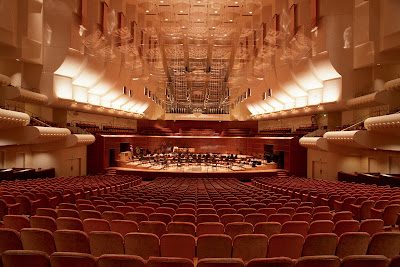 I hate to complain, but the concert last night was rather uneven, I thought. As is so often the case at concerts (although not usually in San Francisco), the first piece on the program gave the impression that the performers weren't quite warmed up. I suppose it was competently played, but there wasn't much excitement to it. I'm afraid I felt much the same way about the Triple Concerto, which ought to have been the centerpiece of the program. No oomph, and Weilerstein seemed to be unsure about where her entrances were, despite having the score in front of her. All three of the soloists used scores. I guess that's OK, but it's a bit unusual--not that I could remember the solo part to Yankee Doodle.

Part of the problem was the odd dead spot that I'm increasingly convinced really does exist at Davies Symphony Hall. I was in seat Y107, just under the overhang of the balcony. At other concerts sitting in this area (most recently Gil Shaham and Itzhak Perlman) I've noticed that the sound is very muddy, and especially in the lower registers of the various instruments. It appears most marked when a solo instrument is playing over the orchestra.

This is particularly unfortunate in the case of the Triple Concerto. Chee-Yun's violin was usually crisp and had presence, the piano was audible throughout, but Weilerstein's cello, especially when she was playing on the lower two strings, seemed to disappear at times--as if she were miming, her fingers and bow moving but producing no sound. Too often, she was simply inaudible. That was disconcerting, to say the least, but it was especially disappointing in the many sections of the concerto that involve a conversation among the three solo instruments: The cello wasn't talking. I wonder if others in the audience had the same impression? [I just looked back at my most recent previous posts that touch on this problem: At the Gil Shaham concert, I was in Y107--the same seat. At the Perlman concert, I was in seat 107, two rows back, in AA107. Clearly there's a pattern here.] Chee-yun looked lovely in a magenta gown, Weilerstein wore a dress of a pretty amethyst color.

The performance of the Syphony No. 2, however, was excellent. The conductor and musicians seemed finally to have connected, and we were treated to a lively, nuanced performance of Beethoven's second symphony, which seems to me an altogether more self-assured, more interesting composition than his first. The woodwind section was a stand-out, as it usually is at the San Francisco Symphony.