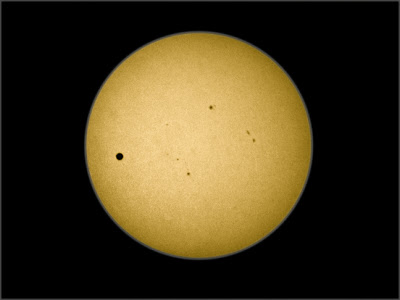 This is a photo of the 2012 Transit of Venus. I snapped it at 5:12PM in the Pacific time zone, about two hours into the planet's six-hour forty-minute journey across the face of the sun. Several groups of sunspots are clearly visible. Essentially, this is the same phenomenon as the annular solar eclipse of last month, but the disk of Venus is very small relative to the size of the sun, so there is no dimming during a transit.

Transits of Venus come in pairs, eight years apart. This one follows one in 2004. The next pair will occur more than 100 years from now, in 2117 and 2125. Transits of Venus show a repeating pattern over 243 years. Two transits separated by eight years are followed by another pair in 105.5 years. That pair is followed by another 121.5 years later. The pattern then repeats.

Transits of Venus are rare enough that only a handful of observations have been recorded. According to Wikipedia, there is no evidence that any of the great ancient civilizations were aware of the transits. The first documented scientific observation was in 1639, made by Jeremiah Horrocks, near Preston, England. Horrocks used his own corrections to Kepler's calculations of the orbit of Venus to estimate the timing of the event. Kepler had predicted the 1631 transit that preceded the one Horrocks observed. Horrocks appears to be the first to have understood that the transits would occur in pairs separated by eight years. Horrocks observed the transit the same way I did, by projecting an image onto a piece of paper using a simple telescope.

The next pair came in 1761 and 1769. Edmund Halley (after whom the comet is named) championed the idea of using the 1760s transits as a means of calculating the distance between the sun and the earth (known as the astronomical unit, or AU), having himself made calculations of the AU in 1676 using a transit of Mercury. He was unsatisfied with his results, however, because only one other scientist had made such an observation. The AU could be accurately measured, he reasoned, using triangulation, but that would require precisely simultaneous observations from widely separated points on Earth. He urged expeditions to make such observations. Halley died in 1742, but people listened. Among those who recorded the 1761 event were Captain James Cook, at Tahiti, on his first voyage around the world. Observations in 1761 from various locations around the globe yielded an estimate of 153mn kilometers for the AU--a significant improvement (Horrocks had estimated 95.6mn kilometers). Calculations from the 1874 and 1882 transits yielded a fairly accurate figure of 149.59mn kilometers. Today the AU is given as 149, 597, 870.700 kilometers--actually the mean distance, as the distance fluctuates slightly. Radio telemetry and radar have replaced the methods used in the past, but I found it satisfying to be able to do essentially what Horrocks did way back in 1639. I had the advantage, however, of being able to find the exact time of the event by using Google.

If you missed this event, there will be a transit of Mercury on May 9, 2016. Mark your calendar.
Posted by Colin Talcroft at 4:54 PM No comments:

In a somewhat surprising turn of the weather, we had rain overnight. Late this afternoon, it's clear and sunny again with only large cumulus clouds in the distance. It came quickly and left quickly as well--likely the last rain we'll have in the 2011-2012 season, which officially ends on June 30. The 0.15 inches we got brings our total to 26.45 inches--not bad, but below the historical average, which is a little under 32 inches.
Posted by Colin Talcroft at 5:29 PM No comments: 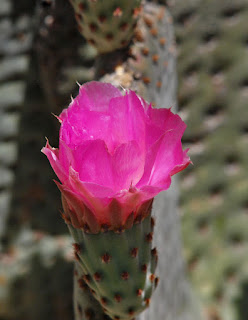 I've become lazy about noting the first blooms on plants in the garden this year--an indication that my curiosity has been satisfied. About four years ago I began wondering how consistently plants bloom each year. I wanted to know if you could create a botanical calendar by planting the right species. I wondered if a year calculated as the date of first flowering of a given plant in two successive years was close to 365 days. With these questions in mind, I began recording the first blooms on all the plants in the garden. By doing so and collecting data, I came to the conclusion that I had thought most likely from the outset: that there is often a fairly significant difference from year to year, but a long year is usually followed by a short year, and vice versa, so that on average, plants do, in fact, calculate years close to an astronomical year.

Much has begun to flower in the past few weeks that I haven't recorded, but this morning I noticed two cacti in the garden had started to bloom and I was inspired to get out the camera. So, I record here first blooms of 2012 on the cactus Opuntia basilaris, or Beavertail Cactus (above), and on Opuntia elata, an obscure prickly pear cactus with a beautiful orange flower that appears to be native to Venezuela. The Beavertail Cactus bloomed on May 9, in 2009, May 20, in 2010, May 18, in 2011 and June 3 this year, so this is actually quite late for this plant. It has calculated years of 385, 354, and 381 days, averaging to 373 days, which is still somewhat long. Chances are good that it will bloom earlier next year. I really like the contrast between the blue-green stems of this cactus and its fuchsia-pink flowers. 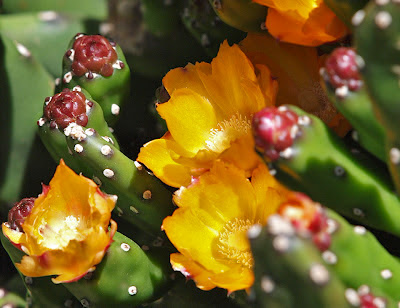 Posted by Colin Talcroft at 5:54 PM No comments: 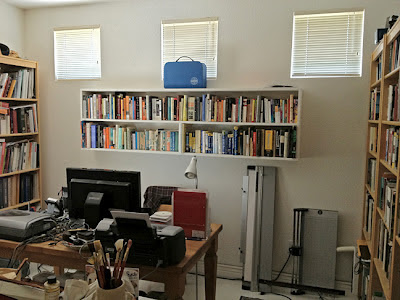 I recently wrote a short post about the bookshelves I built with my brother's help in my office/studio (here). I said that I expected the new space to fill quickly, as it seems to be a rule that new shelves appear only long after they've been sorely needed for some time. Here's a photo of the finished project--completely full already after only a week, as predicted.

Now, I need some new bookshelves....
Posted by Colin Talcroft at 1:04 PM No comments: