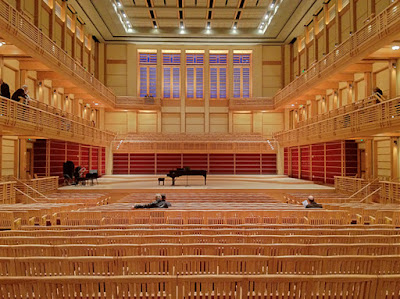 Last Sunday I visited the new Green Music Center in Rohnert Park, on the Sonoma State University campus. Subscribers to the Santa Rosa Symphony are being given the opportunity to see the place and state their seat preference for upcoming seasons (not that I expect anyone but the wealthy and well connected to get what they want). For reasons I still don't understand, the new hall is about 160 seats smaller than the old Luther Burbank Center for the Arts (or the Wells Fargo Center for the Arts) that it will replace. Would it really have destroyed the acoustics to have made the place 10 feet wider to add a couple more rows of seats? Shouldn't the new building have been more capacious, if anything? Surely there was a solution that would have delivered great sound without making it harder to get good seats. I've been a subscriber for going on 12 years now. I had a seat dead center, about two thirds of the way back, which was perfect (in the new hall, a seat a little further back and therefore a little higher would seem to be ideal). As I don't have the means to make large donations, I suspect my new seat will be a disappointment. We'll see.

That said, the sound seems likely to be superb, and it certainly seems to be even, with no dead spots. It sounds good just about anywhere you listen from, even from the upper balconies--although the sight lines are not very good from the side balcony seats. There is a clarity to the sound that is already apparent from listening to some of the performers that were playing on stage while I visited, allowing patrons to get a feel for the space.

The new concert hall is undeniably beautiful. All clad in satiny wood of various grains and colors, you simply want to reach out and touch everything. On the downside, there is a somewhat cramped feel to the place, particularly in those side balcony areas. I think they will be difficult for some of the more elderly people in the audiences to navigate (and the symphony concerts are attended by a mostly elderly crowd, unfortunately). The rise of the main floor is quite gradual. I suspect shorter people will be disappointed, especially in the center orchestra section toward the front. Perhaps most worrisome, the stairways are all made of the same beautiful woods that cover the floors--beautiful to look at, but treacherous; even I had trouble in places seeing the edges of the stairs. The wood strips run parallel to the stairs and, depending on the angle of the light, the sea of parallel seams can create an illusion of a single flat space. This seems like an accident waiting to happen. I'd be willing to bet that either a guest falls or, before that, someone involved in management will see that some sort of material needs to be added to the edges of the steps to provide a visual aid. Let's hope it's the latter.
Posted by Colin Talcroft at 10:05 AM No comments:

Today I tasted the 2007 Pizzato Vale dos Vinhedos Chardonnay from Brazil. I can't remember seeing Brazilian wines on the shelves of stores here before, and this is the first Brazilian wine I've tasted, but the Pizzato Chardonnay appears to have a fairly long history. Brief tasting notes follow.

Very pale straw color. Not nearly as deeply hued as most Chardonnays. Fairly distant on the nose, but with sappy scents and something waxy. Knowing nothing about this wine, I might have guessed it a Semillon from the scent. Not much suggestion of oak, if any. On the palate, deceptively light at first, but it had something suggestive of a Pinot Blanc--a certain restrained richness offset with delicate acidity on a respectably long finish. Hints of pineapple. Reminiscent of one of those good Italian white wines that seems insubstantial at first but gradually grows on you. This is subtle and interesting--far more interesting than I expected it to be. Not your typical Chardonnay. I suspect wine drinkers used to California Chardonnay won't get this, but it seems well made and I found it enjoyable. Very attractively priced at only $4.99 a bottle at Grocery Outlet in Santa Rosa. It normally sells for around $18 a bottle. Having said all that, in the course of a meal it began to seem a trifle flat. It could have used a little more acidity to keep it interesting. If you try this, I'd recommend drinking it immediately. I suspect the 2007 wine has appeared discounted at Grocery Outlet recently because Brazilian wine is not that well known among average consumers in the US and because newer vintages are available.  I'd be interested to sample this wine in fresher vintages. Still, worth a try at least.
Posted by Colin Talcroft at 10:30 PM No comments: 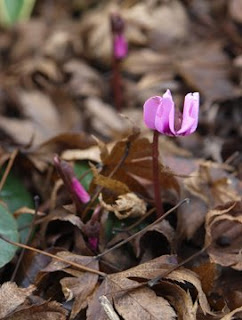 As in past years, the tiny cyclamen Cyclamen coum has become the first flower to bloom in the garden in the new year--today, January 8. The plant bloomed on January 8 also in 2009. It bloomed on January 3 in 2010. In 2011, it bloomed early, on December 23, 2010--not actually into 2011. This year, it's back on schedule, so to speak. Cyclamen coum has thus calculated a long year of  381 days, following a short 352-day year last year and a 360-day year the year before. The average since I began checking has been 364.5 days, almost exactly a calendar year--supporting my supposition when I started this project that years calculated by plants from first bloom to first bloom are likely to average to a calendar year over time, even if there are aberrant years.
Posted by Colin Talcroft at 9:04 PM No comments: