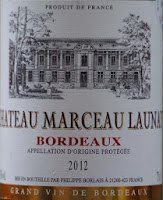 Over the years I've noticed that medals, awards, and other accolades on wine bottles often don't mean very much. The medals given out at the Paris agricultural show each year usually do, however. I came across a little Bordeaux wine today, the 2012 Chateau Marceau Launay that won a Gold Medal at the 2013 Paris show, so I thought I'd give it a try, as it was being offered at a very attractive price (only $6.99 at my local Grocery Outlet). Brief tasting notes follow.

Although not thin-looking, the wine was not the dense, opaque red that some wines are. Despite its youth, it looked moderately mature, being a fairly medium red hinting more at garnet than at the purple of a very new wine. Scents of vanilla and oak were predominant on the nose, with hints of cardamom and orange peel. Not especially forthcoming at first, but pleasant enough. Light-bodied and quite tannic initially. Rather closed on the palate, but with a little plumminess and some hints of cocoa on a moderately long finish. Although a bit disappointing at the moment, this would seem to have some promise. I suspect it will need time to show at its best, and it opened up noticeably just with some time in the glass. [A second bottle I opened a week later and decanted was noticeably more approachable and quite tasty]. I've tucked away five bottles for future contemplation. I'll probably open the next one in two or three years [That was optimistic--although now I'll probably wait that long]. At this price, well worth a small, speculative investment. While I don't think this will appeal to West Coast palates accustomed to high alcohol content and up-front fruit, it's well worth considering if you enjoy European-style reds and you're the patient type. If you open a bottle while it's still young, decant it and give it a little time before drinking it. Perhaps at peak around 2020?


(I have no financial connection with any producer or retailer of wine.)
For more wine reviews, use the Wines I'm Drinking label.
Posted by Colin Talcroft at 4:22 PM No comments: 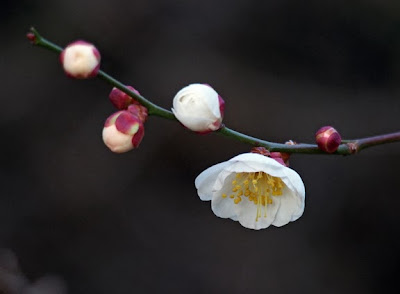 For several years now I've been keeping a record of the first blooms of the year of various plant species in the garden. Usually our dwarf cyclamen (Cyclamen coum) has the first blooms of the new year, in very late December (I count these December flowers as new blooms because they're the first blooms in the new cycle of flowering each year). This year (thinking of 2014) the honor goes to the white Japanese plum behind the house (Prunus mume), which starting blooming yesterday, December 30--quite early for this plant. It typically blooms in the second or third week of January. In 2012, it bloomed on January 14. In 2011, it bloomed earlier than usual, on January 4. It bloomed on January 19 in 2010 and on January 21 in 2009. I don't seem to have a record for 2013.
Posted by Colin Talcroft at 11:04 AM No comments: