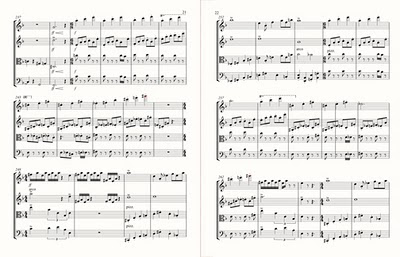 I've just finished writing my sixth string quartet. I've never heard it (or anything I've written) performed, but the computerized renditions produced by my notation software (Sibelius) appear to be reasonably good facsimiles of what an actual performance would sound like. The following link will allow you to download an Mp4 file of the composition, but the link will be good only through December 9. If you really want to hear it after that, let me know. I'll send you a copy of the file.

String Quartet No 6.m4a
Posted by Colin Talcroft at 9:30 PM No comments:

First, to my family: No, there isn't a baby on the way that you don't know about. Now that that's out of the way, a look at popular baby names.

The people who keep track of these things today announced the most popular baby names of 2010--although it seems premature; we still have 29 days to go. I was surprised to see Aiden, a rather British-sounding name at the top of the list of boys' names (is this the Harry Potter effect?)--but I must be out of touch; apparently Aiden has been the leader for six years now. Colin, another rather British-sounding name, came in at 58. Sophia is apparently the most popular moniker to tag a baby girl with, followed by Isabella and Olivia--all rather girly names. I was surprised to see Brooklyn at number 38. Brooklyn? I thought only blues musicians were named after places (although usually states and big Southern cities). Cadence (at no. 70) and Kennedy (at 74) seem odd choices for a girl as well.
Brooklyn seems to have some sort of international appeal, though, along with Cincinnati--but in this case, not as names. I spent the summer of 2010 in Europe, mostly in southern France. I was surprised to see many T-shirts there with references to Brooklyn and Cincinnati on them. Alas for the Cincinnati boosters, it was always spelled "Cincinati." Why? I have no idea, but there's a story in there somewhere. Is it a coincidence that Cincinnati has its own John Roebling-designed bridge that looks very much like the Brooklyn Bridge?
I was reminded of the antique bronze globe that to this day stands on the grounds of Narita-san, the vast temple complex in Narita, the town that hosts Japan's largest international airport. Important world cities are marked on the globe, including Cincinnati, attesting to that city's stature at the time the globe was made. Unfortunately (again) the name is cast incorrectly as the equivalent of "Cincinna City" (in Japanese, シンシナ市). "Shi," as the final "ti" of Cincinnati is pronounced in Japanese, just happens to mean "city" in that language, so the globe makers assumed the place was called "Cincinna" with "City" on the end, as in Oklahoma City. Oh well, I hear Cincinnati's a fine place to live these days.
Posted by Colin Talcroft at 11:43 PM No comments:

Sonoma County's Madrone Audubon Society took a trip to the Sacramento National Wildlife  Refuge yesterday, staying overnight to bird nearby areas today. Because of work obligations, I drove up for the day and came back last night, but still got to see tens of thousands of birds (not an exaggeration) that have come down from the north to use the Sacramento area wetlands to overwinter. There were easily 5,000 pintails alone--very pretty ducks (photo above)--and probably 20,000 snow geese or more. Highlights included a couple of bald eagles--one that caught and ate a large duck--and a beautiful peregrine falcon (the best view I've ever had of this bird, photo below). The majority of the birds were Pintails, Snow geese, Ross's geese, Greater white-fronted geese, Northern shovelers, and Coots, probably.

In total, I saw about 45 species. Last year on this trip, I saw seven new species. It's an indication of just how many birds I've seen in the past year that I got nothing new this time around. Still, it was a pleasure to see so many birds--in absolute numbers. Birds sighted were: Western meadowlark, Turkey vulture, Red-winged blackbird, Black phoebe, Red-tailed hawk (about seven in the course of the day), kestrel, American pipit, Mallard, Northern Pintail, Snow goose, Ross's goose, Greater white-fronted goose, Yellow-rumped warbler, Coot, Northern shoveler, Marsh wren, Northern harrier, Cinnamon teal, Blue-winged teal, Horned grebe, Dunlin, Peregrine falcon, Moorhen, Snowy egret, Raven, Great blue heron, Greater scaup, Black-necked stilt, Gadwall, white-crowned sparrow, American wigeon, Eurasian wigeon, Great egret, Bald eagle, California gull, Herring gull, Starling, Ring-necked duck, Ruby-crowned kinglet, Bufflehead, Golden-crowned sparrow, and Ruddy duck (all on the driving tour at the main refuge). At Llano Seco, saw many of the same birds but also Sandhill cranes, a Long-billed curlew, Greater or Lesser yellowlegs (too far to tell which), and Canada geese (surprisingly few of these overall), and, along the road elsewhere, a few groups of Tundra swans.
Posted by Colin Talcroft at 11:15 AM No comments: