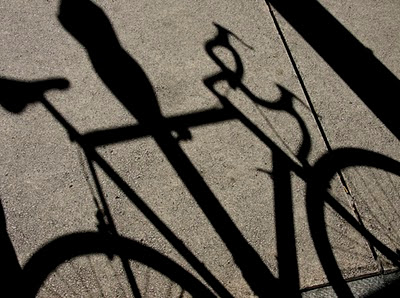 The shadow of a bicycle and of the parking meter it was shackled to combined to make pretty scene. Found art.

For more found art, see my blog Serendipitous Art.
Posted by Colin Talcroft at 8:29 AM No comments: 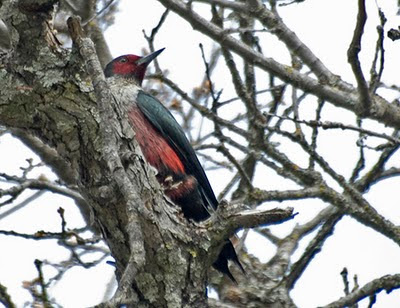 There are between 8,000 and 12,000 species of birds in the world, depending on whom you ask (and some people claim there are many more). A little over 900 have been recorded in North America. The count for Sonoma County, California, where I live, is about 430. There are only a handful of people in the world that have seen more than 8,000 species--or even 7,000--so my life list of 333 (as of today) is rather modest, but any day you see a new bird (a "life bird" as the birders say), is a good day. Yesterday, March 5, I got three life birds. A good day, indeed.

Among them was this handsome Lewis's Woodpecker--a bird I've been trying to see for some time. It's related to the Acorn woodpecker, but much less common, at least where I live. Having never seen one before, it was surprising to see seven of them yesterday, along Putah Creek, near and at Lake Solano County Park, not far from the conjunction of the borders of Napa, Solano, and Yolo counties. I made stops at Lake Hennessy and Lake Berryessa along the way. Lake Hennessy was notable for nearly 120 Western Grebes, many of them displaying courtship behavior, accompanied by odd cries eerie in the early morning stillness.

My other life birds for the day were White-throated Swift--not an unusual bird, but one I'd not encountered before, and California Thrasher, which is not rare either, but limited to habitat I haven't birded much.

For more information about bird watching in and around Sonoma County, see my Website Sonoma County Bird Watching Spots.
Posted by Colin Talcroft at 10:22 PM No comments:

Last night and today, we had more rain--another 0.85 inches. That brings the 2010-2011 total to 25.75 inches so far--at my house anyway. Average accumulated rainfall by March 7 has historically been 25.77 inches, which means we have been very close to normal, although some Santa Rosa stations have reported as much as nearly 29 inches to date. Average annual in Santa Rosa has historically been 31.01 inches.

[Update: Subsequent drizzle has added another 0.15 inches, bringing the total as of March 11 to 25.90 inches.]
Posted by Colin Talcroft at 4:32 PM No comments: