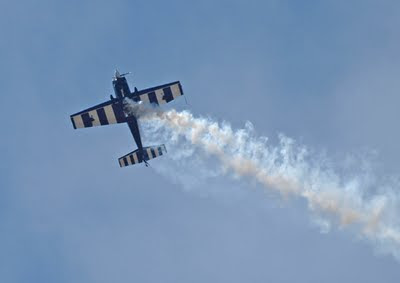 I spent the day today at the Santa Rosa "Wings Over Wine Country"Air Show out at the Santa Rosa Airport. I had never been before. I've lived in Santa Rosa for 10 years now. Every year at this time (usually the third weekend in August) I hear about the show and consider going. On the Sunday at the end of the show it's common to hear the sound of vintage aircraft overhead, which usually sends me out with my binoculars to look at the old WWII fighter or odd transport plane flying over as it leaves Santa Rosa after the end of the show. My house seems to be on the flight path out of town. That always makes me wish I had been at the show to see what I missed. This year I determined to go. Parking cost $3 and the $20 entry fee ($5 for kids 12 and under) seemed steep, but it was worth going at least once. There were many, many aircraft parked on the runways for viewing, including military, commercial, and private aircraft, and there was a stream of displays in the air, including workhorses like the DC-3 and planes as exotic as a U-2, which made a brief appearance before disappearing into the clouds at an alarming angle. 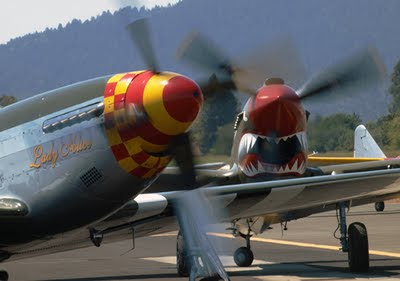 I most enjoyed seeing the aerobatics--particularly the stunt flying of Vicky Benzing and five-time world champion stunt flyer Kirby Chambliss (first photo)--and the WWII vintage aircraft. Chambliss flew sideways, backwards, upside down, and just about every other way airplanes don't normally fly. Among the vintage aircraft, seeing (and hearing) a flight of five P-51s, a P-47, and a Yak fighter evoked an era long past (pictured here on the runway), but I especially enjoyed seeing a Hawker Sea Fury fitted out with smoke generators that did some excellent flying (bottom photo) in Royal Air Force livery. Watching the streams of smoke and vortices created was almost as much fun as watching the airplane, which is a handsome design reminiscent of the Spitfire and the Hawker Hurricane--planes I built as a child from model airplane kits more than once. Note the tailhook on the Sea Fury for aircraft carrier landings--something I didn't see until I looked at my photographs.

There was a lot of standing around waiting for things to happen. I got some sunburn despite a hat and sunglasses, but it was still fun. The show continues tomorrow, Sunday, August 21, 2011. 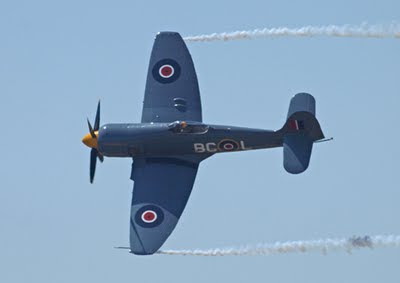 Posted by Colin Talcroft at 9:09 PM No comments: 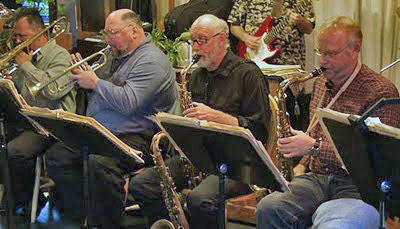 Last night I went to the hear the Neil Buckley Octet at Plaza Bistro, in Sonoma--right on the Plaza, as you might expect. The restaurant has a large back room where jazz bands of consistently high caliber play on Friday and Saturday nights, often booked by the Sonoma Jazz Society. The restaurant serves full meals in the back room but there is a second bar there as well (the restaurant's main bar is out front). The Octet plays 1950s cool jazz using arrangements by the late Neil Buckley, a well-known West Coast performer. This band is always good but they were in especially good form last night. Each of the eight performers (drums, guitar, bass, trombone, trumpet/flugelhorn, and three sax players) is top-notch, but we heard really tight ensemble playing as well. There was some particularly powerful but controlled trumpet work and a lot of sexy solos on the saxes. Thoroughly enjoyable. The restaurant has solid if not stellar food and an interesting wine list. My son drew his own crowd out on the patio with his yo-yo tricks. (Note that the photo above is from a different gig. Uncharacteristically, I didn't have a camera with me....).
Posted by Colin Talcroft at 9:55 AM No comments: 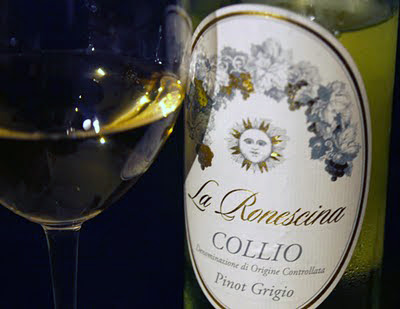 Having not long ago tasted all the Pinot Grigio wines on offer at my local Trader Joe's, I felt it my duty to try this wine, which has appeared since then. This comes from Collio (which means hills) in the Friuli Venezia Giulia region in the northeast corner of Italy (the area includes Venice). Most Italian Pinot Grigio comes from this general area, but often the best are from Collio. I liked none of the Pinot Grigio wines from Trader Joe's I tasted before--they were uniformly bland. I had higher hopes for this one. Tasting notes follow.

A typical, very pale straw color, pretty in a well-chilled glass. Melon and sappy scents on the nose. A hint of lime. A suggestion of toasted grain. A little honey perhaps. Overall, fairly fresh and attractive. Quite tart on the palate with some fruity sweetness on the mid-palate followed again by a rush of tartness and then a delicate lingering finish with hints of nuts and an attractive slight bitterness at the very end. A trifle too tart perhaps, but at least this has some flavor and it's clean and refreshing with a little nuance. Likely to be good with foods that need to be offset by something with an acidic bite. Probably excellent as an aperitif on a hot summer night. Not complex or profound, but quite acceptable light summer wine. A cut above nearly all the wines I tasted in the first bunch from Trader Joe's, where this costs $6.99 a bottle.


I have no financial connection with any producer or retailer of wine. 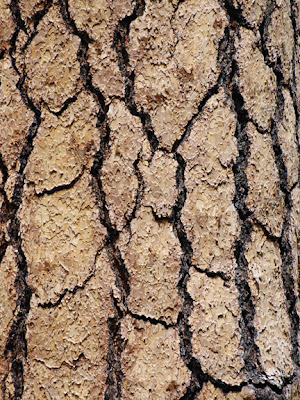 On my recent trip through central Oregon and north to Vancouver Island I stopped to do some walking at Shevlin Park, in Bend, Oregon. I enjoyed the miles of trails, the river that runs through the park, and the many birds I saw there. There were some huge evergreen trees with beautiful bark. Found art.

For more found art, see my blog Serendipitous Art.
Posted by Colin Talcroft at 11:53 AM No comments: