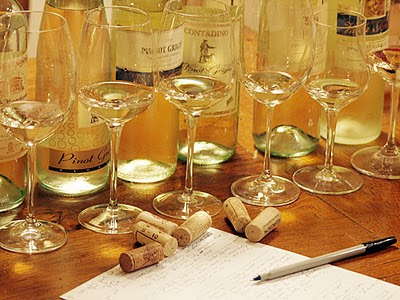 Last night I tasted all seven of the Pinot Grigio wines currently available at my Trader Joe's (Santa Rosa, CA). I don't normally drink Pinot Grigio much, but I was interested to see the wines were priced between $3.99 and $6.99 a bottle (mostly $3.99) except one--which was $19.99. I wanted to know if the expensive wine, the 2009 Santa Margherita Pinot Grigio, was worth the money. I'm the curious sort. As usual, I tasted the wines blind. All seven were from Italy, mostly from the area around Venice. All were from the 2009 vintage. The wines I tasted were:
Tasting notes follow:


2009 Gaetano D'Aquino Pinot Grigio delle Venezie ($3.99 at Trader Joe's)
In ripe years, this producer is responsible for some decent, very inexpensive Chianti Classico wines, also available at Trader Joe's. The Gaetano D'Aquino Pinot Grigio was a very pale straw color. The nose offered very little. There was a hint of pears at first but not a lot else. Later the nose seemed simply grapey with nothing distinctive about it. The wine was clean and tart and rather thin. Not a lot of flavor. Although it was a trifle sweeter on the mid-palate, it mostly tasted like water with a few lemon slices thrown in. Perhaps a suggestion of almonds? Not unpleasant, but of no special interest.

2009 Santa Margherita Valdadige Pinot Grigio ($19.99 at Trader Joe's)
Very pale gold. Distant caramel scents but little else at first. A hint of almonds and some musky scents later. A little more complex than the first wine, but generally similar. Somewhat drier but mostly tastes like lemon water. Only moderate body and flavor. Why does this wine cost so much more than the others?

2009 Contadino "Vivace" Pinot Grigio delle Venezie ($4.99 at Trader Joe's)
It was obvious from the outset which wine this was because it's made with a little fizz in it and the bubbles were apparent. None of the other wines had any fizz.Very pale gold. Tiny bubbles. Has the scent of grain or toasted grain. Apricots perhaps? A little sweet, so more body than the first two wines, but no more flavor. Somewhat heavy and quickly tires the palate. Otherwise a rather dull wine with little to recommend it. Might be attractive very well chilled on a hot summer day, but there are better wines for that purpose.

2009 Mezzacorona Vigneti delle Dolomiti Pinot Grigio ($6.99 at Trader Joe's)
This was one of the better wines of the bunch. Again, a pale gold. Slightly toasted scent. More fruit than most of the other wines. Citrus flavors. Lemony, but still not very much on the nose or on the palate. Perfectly drinkable and probably my favorite of the group, but probably not sufficiently interesting to make me want to go back for more--although I might.

2009 Contadino Pinot Grigio delle Venezie ($3.99 at Trader Joe's)
Pale gold. Again suggestive of apricots and roasted grain. Distant suggestion of hazelnuts perhaps? Flat compared with some of the other wines (less acidity). A tad sweeter than the first two wines, but less sweetness than the second pair (above), but all seven of the wines were quite dry, with the Vivace wine  and perhaps the Villa Sonia wine most noticeably with a little residual sugar. Ultimately, just plain, uninspiring wine. Little scent, little flavor. 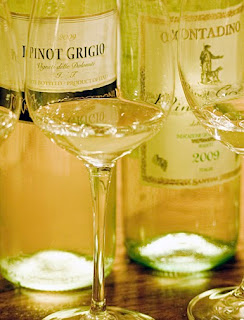 2009 Villa Borghetti "Grigio Luna" Pinot Grigio delle Venezie ($4.99 at Trader Joe's)
Palest in color of the seven wines. Distant lemon scents. very closed. Almost no scent at all. Seemed more alcoholic than most of the others (but that was an illusion: they were all 12% or 12.5% alcohol). Seemed the driest of the bunch as well. Mineral hints on the palate. Good, peppy acidity. This was one of the better wines, I thought, but still thin and rather bland.

2009 Villa Sonia Pinot Grigio Piave ($5.99 at Trader Joe's)
Pale gold. The only wine in the group that had any sort of a nose to it. Really stood out by comparison. Strong floral scents. Nectarines. Roses? Suggestive of a Viognier wine. Similar on the palate. Some peachy, nectarine, apricot flavors. A bit longer than some of the others. Actually has a little body to it. Slight interesting bitterness on the finish. At least it has a finish. While this stood out, it was mostly by comparison. The wine was a bit sweet, fairly one-dimensional, and thin. This has some immediate appeal but it's the sort of wine that's easy to quickly tire of. If you like an easy, slightly sweet ,very light white wine for sipping, however, it's likely to appeal.

In conclusion, I wouldn't write off Pinot Grigio entirely, as it's sometimes tempting to do. Collio in Italy makes some of the best--notably the wines of Livio Felluga (I noticed recently that the new Santa Rosa Whole Foods has the Livio Felluga Collio Pinot Grigio). There are good examples coming out of Oregon and Washington State. Having said that, none of the wines reviewed here is much of a recommendation for the grape. Not only was the Santa Margherita wine little better than the others, none of the wines was especially interesting. The best I've had recently is probably the 2008 Villa Teresa Pinot Grigio they've been pouring at Café Della Stelle, in San Francisco. Pinot Grigio can, in fact, be excellent.


For more wine reviews, use the Wines I'm Drinking label above.