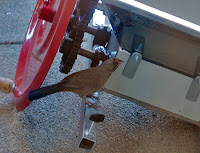 I have 32 vines in my backyard, about a third Sangiovese, the rest Cabernet Sauvignon and Cabernet Franc. What has that got to do with birds you ask? Read on.

Yesterday, while lazing around the house, on a day free of work, I was stretched out on the sofa, reading The New York Review of Books. I began to hear a metallic scratching noise, but it stopped and I went back to reading. Until I heard it again. I didn't really feel like moving so I tried to ignore the sound, but after about ten minutes of distraction I followed the noise to its source. A California Towhee was valiantly battling its own reflection in the stainless steel sides of the grape crusher I'd washed and left out to dry by the front door (the 2010 grape harvest at my house has recently finished).

Nearly everyone has a story about something amazing crows do. Around here, they're known for cracking the walnuts they forage from the walnut groves by either dropping them from lampposts or leaving them in the street to let cars run over them. I've heard that certain crows in Sweden have learned to cover solar cells that control outdoor lights with their wings in the winter so that the lights come on and provide warmth. At the other end of the scale, I've read that a tom turkey will happily attempt to copulate with empty space if a lightbulb is suspended for it at the right height to suggest the head of a female turkey. Clearly some birds are smarter than others.

Last year for a few weeks a Spotted Towhee perched every morning on one of the side mirrors of my car and attacked its own image, believing the reflection to be an intruder. Is this a towhee thing? They are territorial birds. Where do towhees rank on the scale of bird intelligence? Is it smart to recognize your own image as another bird but not as yourself? I don't know, but I was impressed by the persistence of the California Towhee yesterday. He was at it off and on almost the entire day. I tried to explain the illusion to him. He didn't want to listen. Today I'll put the crusher away, ready for next season. Don't want to tire him out.
Posted by Colin Talcroft at 10:10 AM